Not for the first time in recent years, the world is abuzz with the news coming out of Sāmoa. But this time, much to everyone’s relief, it isn’t disease catching global attention but the possibility that a woman might become the island’s first ever female prime minister, just five years after becoming its first deputy PM.

But Fiame Naomi Mata’afa, who had seven terms in office as the Human Rights Protection Party (HRPP) MP for Lotofaga, didn’t get this far by being promoted through her party ranks. Instead, she did it by quitting. Last September, Fiame left her ministerial position, the deputy PM job and her own party to join other former HRPP members who were trying to change the government.

At the time of her defection over what she described as a descent into tyranny, HRPP had been in power for 40 years, with the same prime minister at the helm for half of that. Tuilaepa Dr. Sailele Malielegaoi is currently the second longest serving prime minster in the world, and it appears he has no intention of giving that status up. Before the election he predicted his party would win 42 out of 51 seats. After this month’s election it has just 25, though it’s likely Tuilaepa will have all his losing MPs contest their elections in the courts.

The party Fiame left the HRPP for also won 25 seats. Unlike the HRPP, it’s not a parliamentary mainstay; it had never even contested a general election before. Now, with the election tied, and a single independent MP holding Sāmoa’s political future in his hands (he says he will announce which party he plans to caucus with soon), Fiame’s party could be on the verge of a historic victory.

Fa’atuatua i le Atua Samoa ua Tasi, the FAST Party, was founded in July last year. Fiame herself only came on board as leader in March, after parliament was dissolved and she could safely join FAST without getting kicked out of parliament thanks to anti-party hopping legislation rushed into law in September.

So what had Fiame, daughter of Sāmoa’s first prime minister and the country’s second female MP, and granddaughter of one of the framers of the nation’s constitution, been doing between quitting her old party and leading a new one to the brink of victory?

She was meeting Sāmoa, and talking to it.

She started with small talanoa (talking) sessions in her home, a modest state-owned house on the water’s edge. Fiame met with groups of women, youth and entrepreneurs, all hesitant but desperate to break the decades-long silence imposed on them by an unwritten rule that if you speak against this government, you can expect repercussions.

As a journalist in Sāmoa, I am confronted with this belief on a near-daily basis. It’s especially strong among successful people with growing businesses too scared to be quoted by name lest they lose contracts or clients, or worse.

But Fiame, in her calm way, pressed her Talanoa guests to speak up. And they did.

“She wanted a forum where there was an exchange, she wanted to hear from people, she wanted a two-way conversation, in an informal setting,” Fiame’s friend, campaign supporter and fundraiser Tauiliili Alise Stunnenberg, said about one of those first sessions with youth.

“The evening was more than we could ever expect. The calibre of the questions was amazing. If government is going to be left in the hands of these young people, I would feel very safe.”

Sose Annandale, another of Fiame’s campaign crew – who call themselves Friends4Fiame – said a lot of that old customary silence about politics comes from a sense that nothing they said could change Sāmoa anyway.

“A lot of these young people [said] they felt powerless, that they had no voice, that there is a division in our society which is becoming more and more prevalent,” she said.

“They felt numb; they didn’t even want to voice their opinion because it would amount to exactly nothing.” 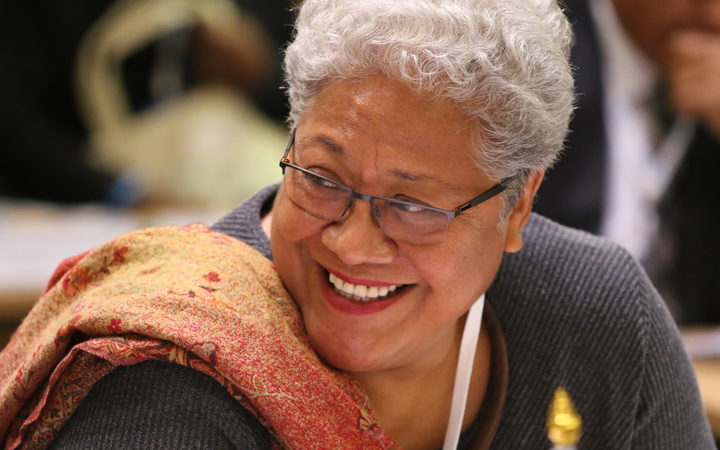 Those sessions at home quickly transformed into a national tour programme. Fiame was welcomed into village halls all over Upolu, the smaller and more urban of Sāmoa’s two islands.

Eventually the new party she would become leader of, Faatuatua i le Atua Samoa ua Tasi (FAST), took up her campaign strategy and ran with it, touring villages to introduce their party platform, candidates and visions for Sāmoa.

Fiame, though officially an independent MP and at that time “unaffiliated” with FAST, joined them on their roadshow.

She said that in her 35 years as an MP she had never heard people asking prospective candidates the kinds of questions they began asking during those visits.

The candidates were quizzed on legislation; on the impacts their proposals might have on working people’s lives. The party was asked about land and chiefly titles, on the powers of the judiciary and on the cost of living.

“I have been a politician since ’85, and never in a village meeting has someone said ‘what are you going to do for me?’,” Fiame said.

“It comes down to people understanding issues that take them beyond their immediate need and appreciate a broader protection that includes them as well.”

As an MP, a cabinet minister since 1991 and then as the deputy prime minister, Fiame was not a showy politician. Not one for grandiose speeches or dramatic displays, her style was to listen lots and speak carefully.

On the Saturday after election day on April 9, still reeling from the fact that FAST won not only enough to form a legitimate opposition but to maybe even govern itself, Fiame’s friends said they expected her to carry that thoughtful style into the future.

“She really cares for the common people, the people of Sāmoa. She really cares about protecting the interests of our nation. It takes a woman, doesn’t it?,” said Annandale.

“I think she’ll make a prime minister that has a lot of alofa, love for the people,” said Lauano Lauina Grace, another Friends4Fiame member.

“She’s Tama-a-Aiga (Sāmoan royalty) but she’ll make us a cup of tea, she’ll cook for us, she doesn’t expect us to run after her. I don’t think she’ll change.”

The Friends4Fiame team, who immediately busied themselves with the work of campaign schedules, fundraising and printing hundreds of hot pink t-shirts to post all over the world, are elated with Fiame and the party’s success.

They get emotional at the thought of their friend, who makes them tea and shares defrosted baguette with butter with them over the kitchen bench, becoming the most powerful person in the country.

“I don’t think we did anything amazing, because it’s just a normal thing, you want to help your friend. We needed to do this and we just get it done,” Tauiliili said. “If you care about somebody or something then it’s not amazing, you just do it, because you believe in them.” Tuilaepa Sailele Malielegaoi, who has been prime minister of Sāmoa since 1998. (Photo: Artur Widak/NurPhoto via Getty Images)

Fiame herself is not counting her chickens before they have hatched. She declines to answer questions about what kind of leader she plans to be. But a look at her style before she potentially takes up the mantle of prime minister gives a fair idea of how she might act once she gets there.

For the past week, FAST members and supporters have been gathering in a function centre to celebrate the preliminary results and await the final tallies together. They have been praying together and sleeping camp-style in the hall, spending each day of the week in each other’s pockets as they figure out how the next five years will look.

Every activity is livestreamed or otherwise shared on Facebook and watched by supporters all over the world, including many in New Zealand. They are the thousands of Sāmoans who have felt disenfranchised from a country they are helping grow by taking on chiefly titles, serving their families, and sending back millions of tala in remittances.

Fiame has been looking at them and their families in Sāmoa in the eye and listening to them, something many feel politicians haven’t done in decades.

In December, she told the Samoa Observer that her old party, HRPP, used to be a party that listened. It was a consultative, talkative party that deliberated and debated.

“We are advocating not only for a change of government but a different way of working and it requires a team, whoever that may be, to really understand that and move it forward,” she said.

“My memory early on of HRPP is that it was about that. They really talked through things. I think that has been part of the issue now with HRPP having been in for so long, I don’t see that vigour on development issues.

“Sadly, it’s become about maintaining being there.”

Now that FAST has made its way into parliament, Fiame and her colleagues will also begin the work of ensuring the party’s survival. Outside of HRPP, new parties have come and gone but Fiame thinks she knows how to prevent FAST going the same way.

“Throughout the history of political parties it would seem like although there is an initial bringing together of supporters and the public, it inevitably comes down to the political caucus or the political wing,” she said.

“If you want a political party to survive you do have to maintain a broader base than just the political wing. Political parties are people’s organisations.”