The latest in a series of polls by Stickybeak for The Spinoff shows supportive sentiment at its lowest level yet – but still overwhelmingly positive.

For the ninth time since March 2020, a Stickybeak national representative survey has asked people to assess the New Zealand government response to the Covid-19 pandemic. The poll, conducted over the last week, reveals support from almost seven in 10 people. At 69%, however, that’s a full six points below than the next lowest number we’ve measured, 75%, in both June and August of last year.

The result comes as New Zealand approaches 18 months since the first reported case of Covid-19 in the country. The delta variant is wreaking fresh havoc around the world, including in Australia, where two thirds of the population is currently in lockdown, leaving the trans-Tasman travel bubble almost entirely deflated.

What has grown most considerably is those who are somewhere in the middle, or ambivalent, marking the response a “3” on a 1-5 scale; that's up from 10% in February to 18% now. That trend does, however, suggest some erosion in support for the government response, albeit from a very high baseline. The column that measures the most emphatic support for the government response, those who adjudge it "excellent", has fallen from 59% five months ago to 42% today.

Below, a glance at how overall sentiment towards the government response has changed since we began conducting the surveys with Stickybeak. 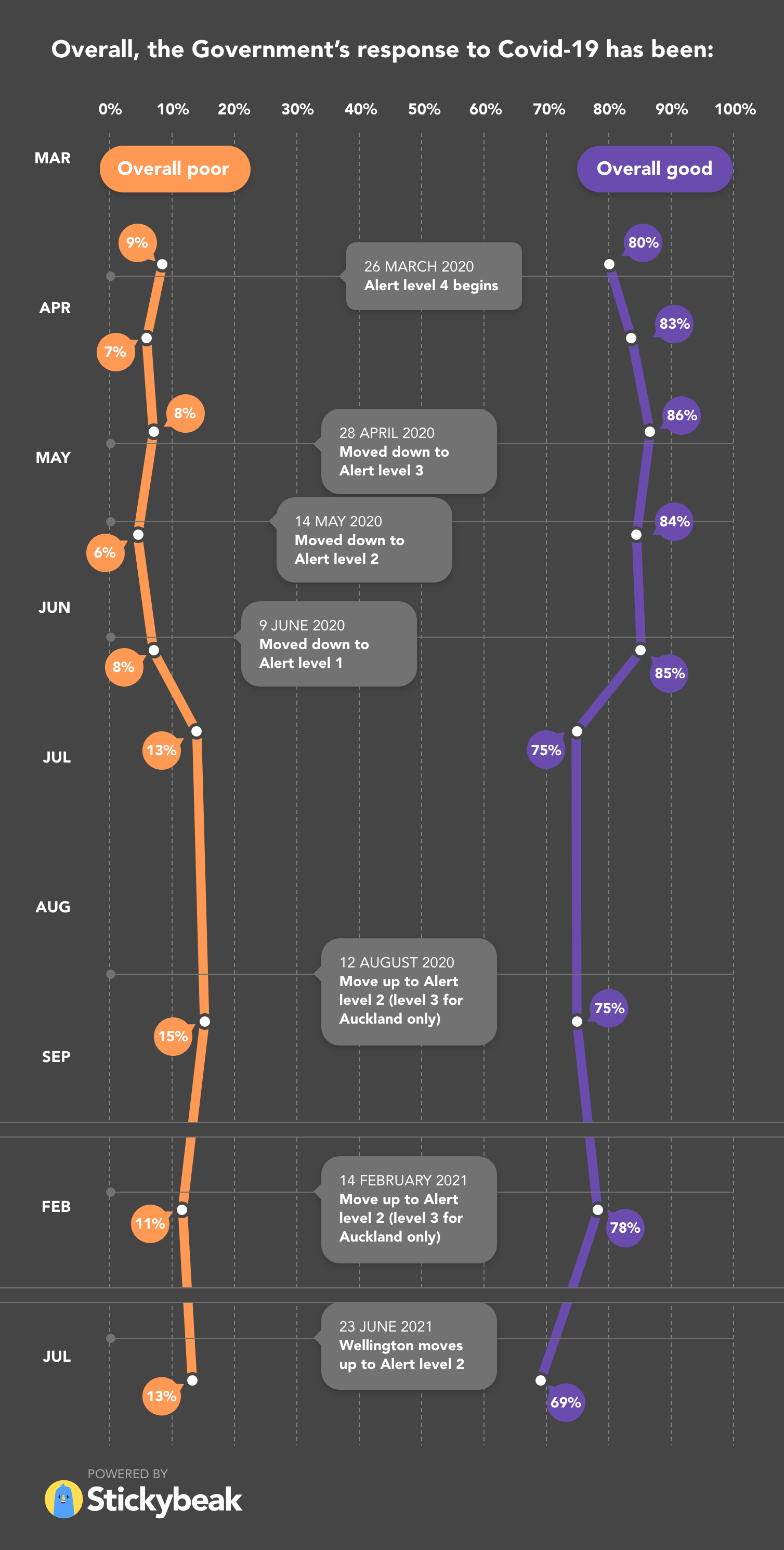 These latest results are broadly in line with research conducted by the Department for the Prime Minister and Cabinet, released to media earlier this month. A survey by TRA found that 75% thought New Zealand was heading in the "right direction" in its Covid-19 response, with 12% believing the opposite and 13% unsure. 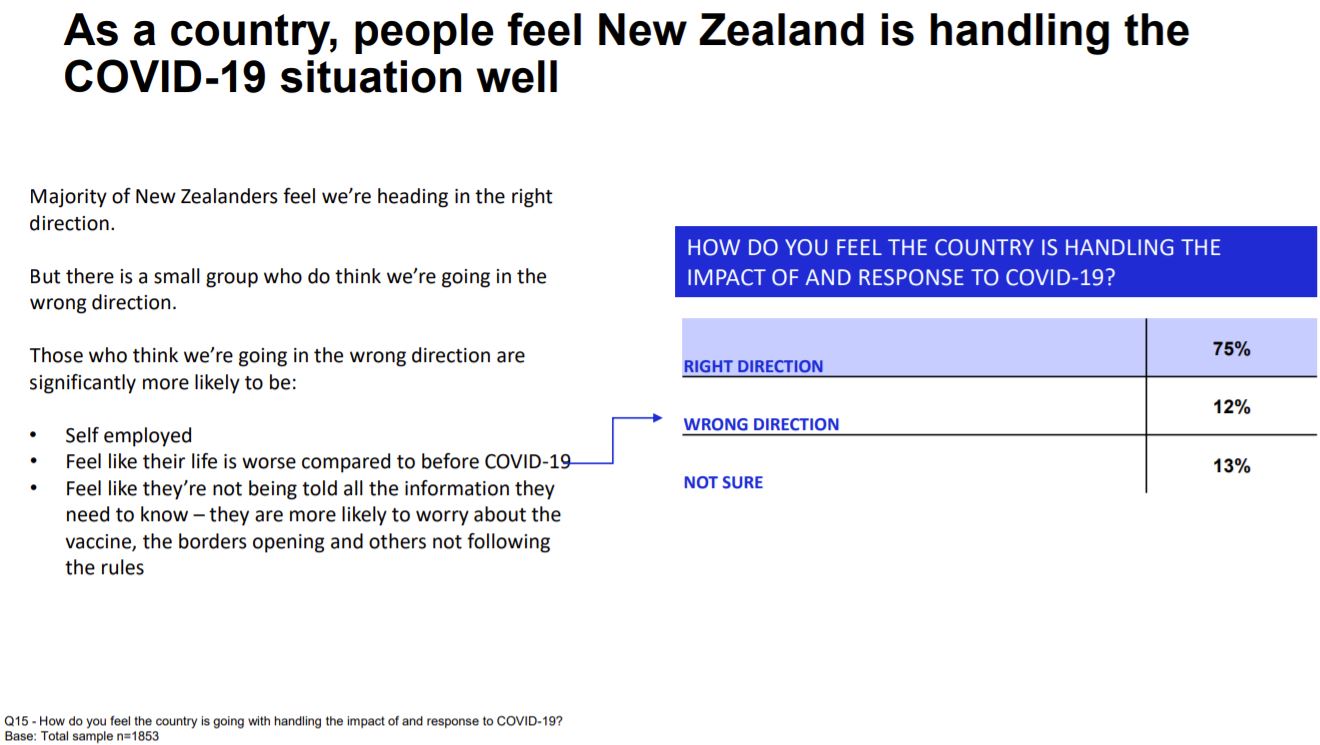 The mood on the opposition

We also asked respondents what they made of the National Party response to the Covid crisis. We last posed this question almost a year ago, soon after Judith Collins took over as leader following the brief and torrid days of Todd Muller. While the view of the National Party response today is still viewed negatively by a margin, the direction of travel is encouraging for Collins and Covid response spokesperson Chris Bishop. In August of 2020, only 15% were broadly positive about the National response; that's now 21%.

More dramatic is the change among those who had a negative view of the party's response. Eleven months ago, two in three respondents, or 64%, were unimpressed; today that number has fallen to 45%. With 34% sitting in the middle, it suggests National has potential to keep the trend moving.

What about that bubble?

Last night the government announced that quarantine-free travel would be suspended for arrivals from South Australia, which has joined the country's two most populous states, New South Wales and Victoria, in lockdown and halted-bubble status. The heightened transmissibility of the delta strain has yet to lead to an outbreak in New Zealand, despite the recent Wellington scare, but it has inevitably added to hesitation around travel across the ditch.

Just over a year ago, when the idea of a bubble was being talked about in media and among politicians, 46% of people in our survey said that, were a bubble to open, they anticipated they would travel across the Tasman as soon as possible or within 12 months. Many of those will have had some urgency, and may have completed that travel already, but nevertheless the contrast is striking: today, only 21% say they are planning to visit Australia as part of the travel bubble within the next 12 months.

We also asked people for their views on the state of the vaccine programme and New Zealand’s approach to “opening up” to the rest of the world. We’ll have those results tomorrow.

A total of n=629 sample was achieved of adults in New Zealand, with 208 of those in Auckland.

For a random sample of this size and after accounting for weighting the maximum sampling error (using 95% confidence) is approximately ±3.9%.

The study went into the field on Thursday July 15 and was completed on Monday July 19.