A group of lawyers concerned with animal law, together with animal rights organisation SAFE, have taken the government to court for failing to ban rodeo. And, based on their recent track record, they may just succeed in ending the sport in this country. Mirjam Guesgen reports.

The New Zealand Animal Law Association and SAFE have taken the minister of agriculture and the National Animal Welfare Advisory Committee (NAWAC, the group tasked with providing the government advice on animal welfare matters) to court.

The two organisations hope to bring an end to what the association calls “the unnecessary and unlawful practice of rodeo in New Zealand”.

The legal code that outlines what can and can’t happen when it comes to rodeo (Code of Welfare: Rodeos 2018) contradicts the overarching Animal Welfare Act, the groups say. What’s more, the government didn’t follow the proper steps when the code was reissued in 2018 and the public wasn’t consulted on it.

“As lawyers, we are concerned that rodeo activities such as steer wrestling or calf roping are allowed to continue despite being inconsistent with the act,” animal law association (NZALA) president Saar Cohen said in a statement. The organisation would not comment further as the matter is now before the court.

“There’s just no possible way that these activities are necessary or reasonable when dealing with animals for entertainment purposes,” says animal law expert Marcelo Rodriguez Ferrere. “So if you want to include them you need to use your regulations power under the act, not a code of welfare.”

It’s a technical legal argument but it boils down to the fact that the Animal Welfare Act defines animals as sentient, meaning that they can have a range of positive and negative emotions and physical experiences, and people who care for animals need to make sure they’re reducing the negatives and increasing the positives. The code, by allowing certain events that the animals find negative, therefore goes against that goal. 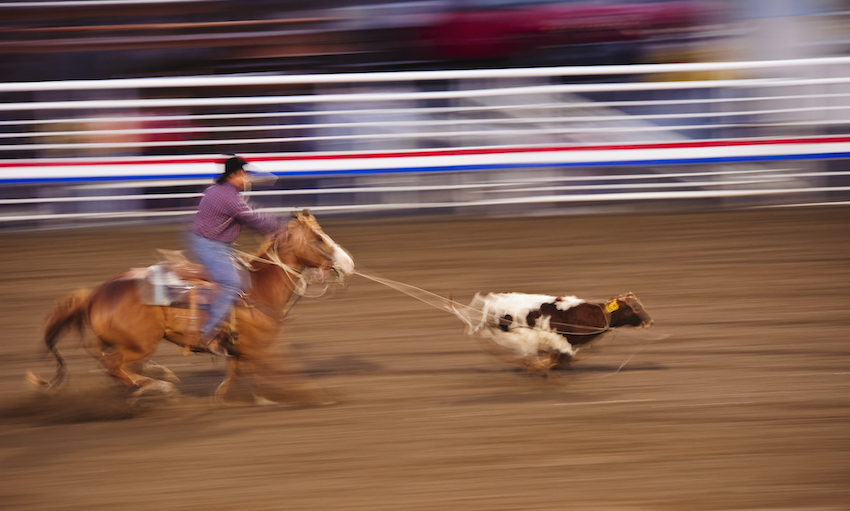 Calf roping is one of the rodeo events that the animal welfare groups say causes ‘substantial negative impacts’ to the calf (Photo: Getty Images)

The NZALA also stated that when the code was reissued in 2018, it was “materially identical” to the 2014 version.

The later version of the code seemed to ignore a report from earlier that same year by animal law commentator Catriona MacLennan, which raised major animal welfare issues and concluded that “rodeos are contrary to the fundamental purposes of the Animal Welfare Act 1999 and breach the basic protections afforded to animals by the legislation. Rodeo practices such as calf roping, steer wrestling or bull riding are at odds with the criminal prohibition against ill treatment.”

Says Rodriguez Ferrere: “That report was a pretty damning indictment on rodeo generally and despite the minister saying she was going to look at specific events and whether the government was going to regulate them, nothing happened.”


Rodeo is actually a series of events, some more problematic than others when it comes to animal welfare.

An event like barrel racing, where horses are guided around barrels quickly and sharply, is of minor concern according to a 2018 animal welfare report, although how much stress or pain an animal experiences depends on the kind of equipment the rider is using, how the horse is trained (positive or negative reinforcement) and the skill of the rider.

Other events, such as steer wrestling, where a person jumps off a horse onto a running bull and forces them to the ground by grabbing the steer’s horns and twisting its neck; and rope and tie, where calves are caught using a lasso, then thrown and tied by the legs, are of major concern and “regularly cause substantial negative impacts”.

Those negative impacts include feeling pain that continues after the event is over, stress and social isolation, or injuries such as torn ligaments, broken bones, bruising and winding or chronic arthritis.

NAWAC has made recommendations in the past around how to try and minimise these negatives, such as using a bungee rope to minimise the whiplash when a calf is caught or changing some events to the rodeo equivalent of rippa rugby (pulling a ribbon on the calf’s tail). It’s unclear, based on the publicly available reports, whether the New Zealand Rodeo Cowboys Association has adopted those recommendations.

The cowboys association did not wish to comment on the current court proceedings, since they were made against the government and not them.

Legal challenge appears to be an effective way of getting stuff done when it comes to how animals are treated in New Zealand.

Last year the law association and SAFE were successful in banning the use of farrowing crates and mating stalls, metal cages that pigs are kept in at various stages of their lives. In that case they adopted a similar argument, stating that the guidelines around how the crates are used (like their size or when) didn’t meet the intentions of the act. The crates are now being phased out and industry and government are looking for alternatives.

Later in 2020, the law association won a private case against a Northland farmer who used an electric prodder on two distressed cattle. He was remanded for sentencing.

When asked why the groups may have taken the legal route, Rodriguez Ferrere says they weren’t left many options. “The political route did not seem to be one that was getting much progress and much satisfaction,” he says.

The government does seem to be making, or looking at making, big changes when it comes to animal welfare. In April this year it announced it would phase out live exports of cattle and sheep by sea over the next two years. Later that same month, it launched an investigation into greyhound racing.

Although he sees this as a willingness to address animal welfare issues, Rodriguez Ferrere says that the government is taking a reactionary approach.