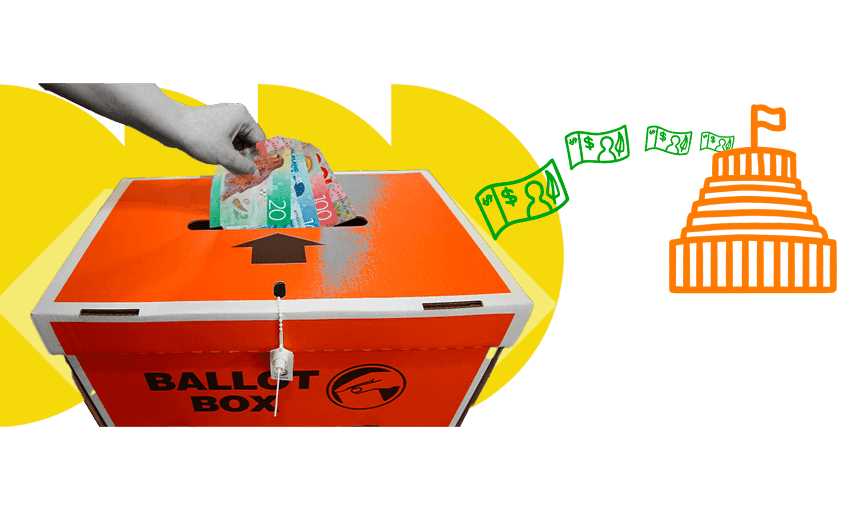 Prosecuting cases is always hard – the requirement to prove all elements of the offence (and negate all possible defences) beyond reasonable doubt sees to that. Thanks to some excellent work from journalists such as Matt Shand of the Sunday Star-Times and investigators at the Serious Fraud Office, we do know a lot about what the foundation was doing, some of it summarised in the public judgment of the court.

NZ First MP Clayton Mitchell prepared a draft letter for the party to use in raising funds. The letter, on NZ First party letterhead, which included “outlining Electoral Act disclosure obligations and inviting payment to NZFF’s bank account”, was used in various fundraising activities, modified where necessary. The letter “drew no distinction between the party and NZFF and expressly sought funds to support the party”. It directed funds to either NZFF’s or the party’s bank account depending on “whoever was asking and needing it the most”.

The judge records: “Payments into the account typically were annotated by the payer ‘NZ First’ and ‘donation’, sometimes including messages of support for the party such as ‘Good luck Winston’. A cheque expressly made out to the party was banked into NZFF’s account. The money was obtained from fundraising efforts initially to support the party’s 2017 election campaign. Funds continued to be raised under iterations of the letter after the 2017 election, totalling some $678,000 by February 2020.”

The foundation “paid some $140,000 in connection with the 2017 election, including rental and other expenses of commercial premises in Wellington’s Lambton Quay used as the party’s ‘campaign headquarters’, and on expenses associated with the party’s 2017 annual general meeting and convention, including production of a video of the party’s ‘bus tour’ of electorates. Some $280,000 was paid for NationBuilder and associated costs for the party’s website development. Nearly $250,000 was paid in relation to consultants’ services to the party.”

Party MPs were sending the letters seeking funds for the foundation, with the judge accepting that “all money was applied for the party’s benefit”.

Neither of the trustees gave evidence at the trial, but an explanation they gave to NZ First’s auditors was used. This included denials of being involved in fundraisers, such as “No payments have been received by the foundation for transmitting to the New Zealand First party”, “The New Zealand First Foundation has NO agreement with the New Zealand First political party” and “The foundation was never to transmit funds from donors to any political party, for example when it became apparent that NZF … invoices had been paid by mistake at the same time as NZFF invoices the trustees recovered the same as a debt from the party”.

Factually, the principle reason for the acquittals appears to turn on this explanation. To have to be declared as a party donation, the judge said “the Electoral Act depends on it being ‘a donation … of money … that is made to a party, or to any person or body of persons on behalf of the party who are involved in the administration of the affairs of the party’.” The judge noted the evidence provided by the prosecution “citing comprehensive evidence of its payers’ intentions” that their donations were “made to a party”.

The judge said that under the Electoral Act, the definition of party donation does not “capture gifts made without the party or on its behalf to people not involved in the administration of its affairs, irrespective if the gift is intended to benefit the party. ‘Party donation’ is not defined by the party’s benefit, but by the party’s receipt of the actual gift.”

The prosecution argued that the two men were in fact involved in the administration of the affairs of the New Zealand First party, with one having a fundraising role for the party, and the other having “multi-faceted involvement including as [Redacted] managing party positions and appointments to them, and attending internal executive meetings”.

The judge said this didn’t matter. Even if the two men were involved in the administration of the party, “the payments determinedly were not made to [them] in those capacities …” but were made to the foundation. He concluded “the payments are to [them] only as trustees, in which capacity they were not “involved in the administration of the affairs of the party”.

If this is the law – and a High Court judge has said it is – then it undermines the donation disclosure regime to the point that it may be pointless unless fixed.

The reason we have donation disclosure is so that, when a party benefits from the money provided to it by donors of large donations, we get to know too.

The finding that money paid to people who were involved in the administration of a political party – that money being intended to be a donation to the party, that was actually used for the benefit of the party – does not have to be declared because those people were wearing different hats at the time it was received completely undercuts this.

It might be too late to use this bill to fix every issue this decision raises (what should we do about foundations generally; whether there should there be rules around how donations are made, eg that they have to be electronic to a nominated bank account; whether there should be more obligations on donors; and whether there should be greater obligations on parliamentary parties), but some half measures are possible. And there are two relatively simple ones that would at least narrow the loophole, if not eliminate it completely. First, amend the definition of party donation (and candidate donation) so it includes donations intended for a party, and donations intended to benefit a party, and to cover off donations received by anyone involved in the party in whatever capacity. Second, amend the requirement that a donation must be transmitted to a party secretary to create an offence of failing to do so.

Other loopholes will remain, with the biggest probably (hopefully?) the lack of disclosure obligations in respect of parties that are yet to register, and donations made by New Zealand-based companies that primarily operate as foreign-owned. These and other issues can hopefully be considered by the broader election law review, but parliament has the opportunity to fix the most glaring issues Justice Jagose has pointed out in the coming months, and it should.