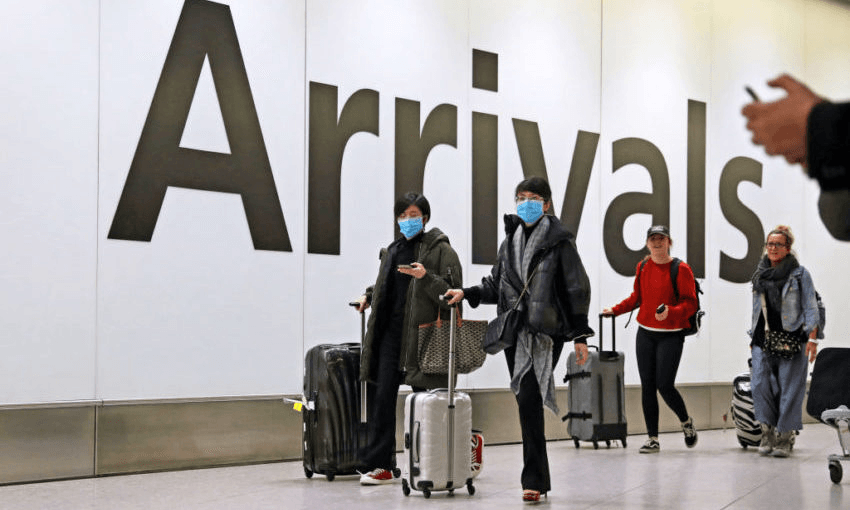 Passengers in the arrivals concourse at Heathrow airport in London. (Photo by Steve Parsons/PA Images via Getty Images)

As NZ bans arrivals from China, has the coronavirus really infected 100,000?

Passengers in the arrivals concourse at Heathrow airport in London. (Photo by Steve Parsons/PA Images via Getty Images)

With reports that several people in New Zealand have been tested for suspected coronavirus – they were all negative – and the WHO declaring the outbreak a Public Health Emergency of International Concern, the New Zealand government yesterday announced entry restrictions for foreign nationals arriving from or transiting through mainland China. Siouxsie Wiles summarises the latest news and the latest science.

Concerned that the coronavirus will spread to countries that do not have health systems to cope with the disease, the World Health Organisation director-general, Dr Tedros Adhanom Ghebreyesus, has declared the outbreak in China a Public Health Emergency of International Concern (PHEIC).

This is a formal declaration by the WHO that the outbreak is a health risk and may require an international coordinated response. Under the 2005 International Health Regulations, when a declaration like this is made, countries have a legal duty to share information with the WHO.

No doubt in response to the WHO declaration, Jacinda Ardern announced yesterday that any foreign nationals travelling from, or transiting through mainland China, will be denied entry to New Zealand as of today. The major concern for our neck of the woods is what would happen if the virus were exported to the Pacific via New Zealand.

We only have to look at how the measles virus recently devastated Samoa to see how outbreaks can play out in countries with under-resourced and under-staffed health services. It’s thought someone shedding the measles virus flew into Samoa from New Zealand in August last year. Because of the low MMR vaccination rates in Samoa, that caused an outbreak that infected over 5,600 of the country’s 200,000 people. There were 83 deaths, most of them children under the age of four.

It took a mass mandatory vaccination campaign and a state-of-emergency declaration that closed schools, imposed a curfew, and cancelled all Christmas celebrations and public gatherings, to bring the outbreak under control. The state-of-emergency was only just lifted at the end of December.

There is no vaccine to protect against the new coronavirus, so I dread to think what impact it could have on our Pacific neighbours.

Update 9.50am: New Zealand Customs has announced it has closed all eGate airport entry points and all travellers entering New Zealand will be manually processed by customs agents until further notice.

Are over 100,000 people in China really infected with this virus?

A few days ago a paper appeared in the medical journal the Lancet estimating that between 37,304 and 130,330 people have been infected with the new coronavirus in Wuhan as of January 25. The authors aren’t the first to suggest that the numbers of reported cases don’t accurately reflect the number of infected people. A team at Imperial College London have published a series of similar reports.

Both teams have made their estimates using the number of cases being seen outside of China and the probability a case would appear based on the number of people leaving from Wuhan International Airport. Given this is a new outbreak with a virus not ever seen before, they had to make some guesstimates as to how infectious it is and the incubation period, hence the wide range.

As of writing this the number of confirmed cases in China is over 14,500 according to the Hopkins online outbreak-tracker. Which is a lot less than 100,000. So are the estimates right, and if so, why are the official numbers so low?

Firstly, the estimates are based on best guesses of things like how infectious the virus is. Secondly, testing to confirm cases takes time and it could be that the testing labs are working at capacity. What would be interesting is to see the number of suspected cases/tests that are pending, and how that number has been changing over time.

It’s very likely that the Chinese are focusing their attention on the people who need medical help. This means anyone with a mild form of the infection won’t be being tested. What wasn’t clear a week or so ago, was whether everyone who got the virus would come down with a very serious infection or whether there would be a spectrum ranging from no or mild infections to death. Now it looks like it might be a spectrum. And that would help explain some of the mismatch.

Doctors in Germany just published a report (see update below) in the New England Journal of Medicine of a cluster of cases in Bavaria. They describe both human-to-human transmission of the virus from someone without any symptoms, as well as people experiencing a very mild infection.

The cluster starts with someone from Shanghai visiting Germany for business meetings. She was fine during her visit but became ill on her flight back to China and tested positive for the new coronavirus. Meanwhile, a few days after the meetings, one of the attendees, a 33-year-old otherwise healthy German man came down with a sore throat, chills, and muscle aches. The next day he had a fever and a cough but soon felt better and went back to work. He was found to be shedding the virus.

A day later, another three people at the same company tested positive for the virus. Only one of them had attended the same meetings as the visitor from China. The other two only had contact with their German colleague. At the time of publishing their paper, none of the infected had shown any signs of severe disease.

Now it’s a case of waiting to see if all these people stay relatively asymptomatic, or if they progress to a more severe disease. It will also be interesting to see if the virus they have has mutated slightly, or if it’s the same as the versions causing more severe symptoms.

*Update 06/02/2020: It’s now being reported that the authors of the report on the cluster of cases in Germany didn’t actually speak to the visitor from Shanghai and that she did have symptoms while in Germany. This means this wasn’t asymptomatic spread.