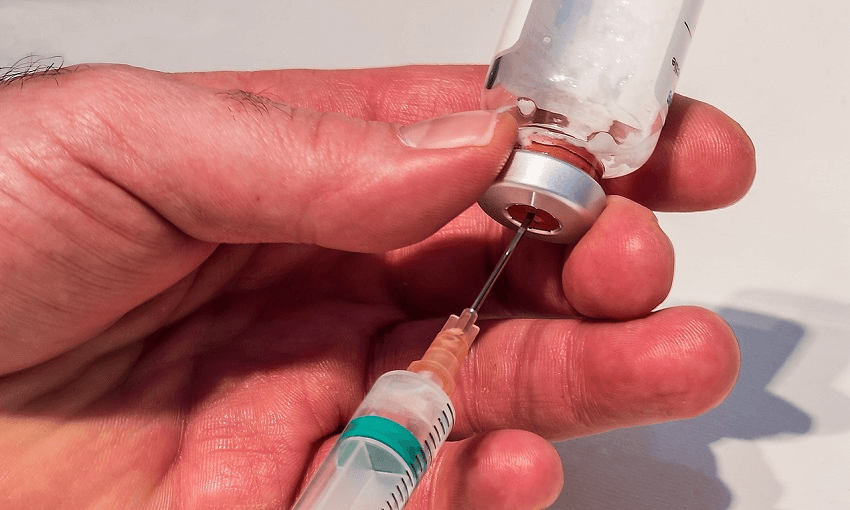 Siouxsie Wiles: The vaccine news is great, but here’s the catch

How would this promised Pfizer vaccine get from the factory to being administered? Does this mean we can stop doing things to stop Covid-19 transmission? And what does 90% effective really mean? Siouxsie Wiles takes on some important questions around this promising development.

It’s all go on the Covid vaccine front this week. While the Brazilian clinical trial of Sinovac Biotech’s CoronaVac vaccine has been suspended after a “severe adverse” event, Pfizer has announced one of its vaccines is looking like it is 90% effective. The Pfizer vaccine is the one the New Zealand government has already signed a binding agreement to secure doses for 750,000 people.

Sinovac’s CoronaVac vaccine is an inactivated version of the SAR-CoV-2 virus responsible for Covid-19. As I write this, there’s not much information available about the suspension of the CoronaVac trial in Brazil. We’ve had a couple of suspensions like this already for other vaccine candidates but CoronaVac trials in Indonesia and Turkey are still going at the moment. Hopefully we’ll find out more soon.

Pfizer’s vaccine, BNT162b2 (licensed from BioNTech), is quite different from CoronaVac. It consists of the genetic material that codes for a specific part of the SARS-CoV-2 virus. The idea is that by introducing this genetic material into our body, our cells will read the code and make the protein for our immune system to see. As I’ve explained before, the advantages of this approach are that it is really quick to develop vaccines like this and really easy to upscale and manufacture. But the main downside is that no vaccines developed using this technology have yet been approved for use in humans.

BNT162b2 is currently undergoing phase III human trials and Pfizer has just announced a preliminary analysis of the data. According to their press release, their vaccine was found to be “more than 90% effective in preventing COVID-19 in participants without evidence of prior SARS-CoV-2 infection”. The trial is a multi-centre, multinational, randomised, blinded, placebo-controlled trial testing two shots of the vaccine, given three weeks apart. What that means is that people in multiple places in multiple countries are being randomly allocated to receive the vaccine or a placebo and no one will know who was given what until the end. You can read the trial protocol here.

There are a couple of important points to note. The first is that the trial is for people over the age of 12, and they are divided into three age categories: 12-15, 16-55, or over 55. Given how age is one of the main factors that determines whether someone is more likely to have a rough time with this virus, I would have preferred to see the over 55s split up further. The second point to note is that the main endpoint of the trial is whether people develop Covid-19 from one week after they received the second dose of the vaccine.

So far, 43,538 people have been enrolled in the trial and 38,955 have received the two doses of either the vaccine or the placebo. At the moment we don’t know how many people fall into each age category, just that 42% are from “diverse backgrounds”. The preliminary analysis being reported by Pfizer is of the 94 cases of Covid-19 that have been confirmed in their trial participants within a week of getting their second dose. From that they’ve reported the vaccine is 90% effective, but we don’t know if that means for all ages of participants. The question I also have is what happens in the weeks and months after people receive their second dose? At the moment it looks like they’ll also analyse the data from two weeks after the second dose.

Will the vaccines be as good as they need to be?

Yet none of the current phase III trials are actually designed to test any of those outcomes. They aren’t measuring hospital admissions, intensive care admissions, or deaths. They also aren’t measuring whether the vaccines interrupt transmission of the virus. There’s a really good article in the BMJ that discusses all this. The main problem is that in the trials, a lab-confirmed infection even with only mild symptoms qualifies as meeting the primary endpoint definition. And each of those confirmed cases brings the trial one step closer to completion.

At the moment we don’t know how severe any of the 94 cases in the Pfizer trial were. The trial will stop enrolling when they get to 164 confirmed cases. What we must be prepared for is the possibility that once a vaccine starts to be rolled out to hundreds of thousands of people, it may well turn out to not be as effective as we’d like.

Pfizer’s announcement is good news, but it doesn’t mean you’ll get a vaccine any time soon

My main worry is that Pfizer’s announcement is going to leave some people thinking a vaccine is going to be rolled out pretty soon and that’ll mean they don’t keep doing everything they can to get transmission under control. Things are certainly moving fast, with Pfizer saying in their press release that they plan to submit an emergency use authorisation to the US Food and Drug Administration soon after the “required safety milestone is achieved” some time in late November. They also say that they expect to be able to produce 50 million vaccine doses this year and up to 1.3 billion doses next year. Given people need two doses, that’s only enough for about one in 15 people globally.

On top of being able to produce enough vaccine, there is also the big issue of how to distribute it both around the world and then to everyone within a country. The logistics of having enough needles, syringes, and people able to safely administer a vaccine are mind-boggling, and Pfizer’s requires a very tricky cold chain to get it from the factory to your arm. It needs to be kept at a whopping minus 70 degrees Celsius. Expect the price and demand for ultra-cold freezers to start going through the roof.