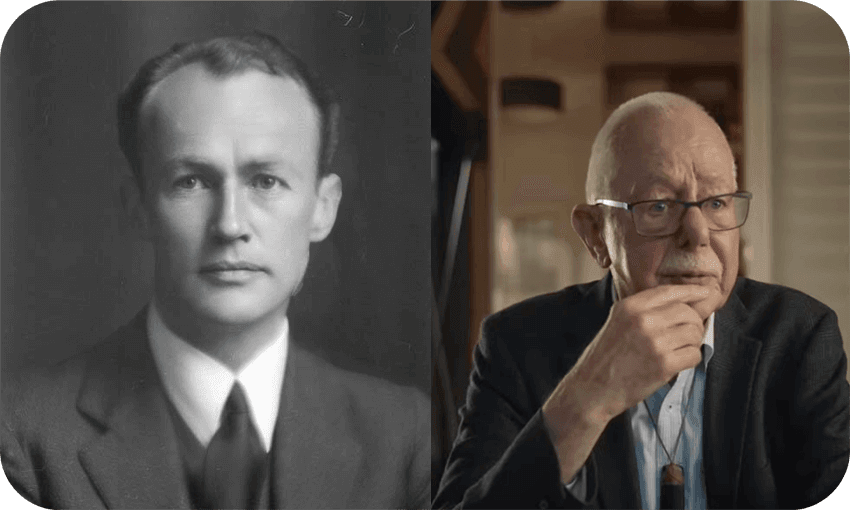 Every New Zealander should know the Sutherlands

There are some whose work has changed Aotearoa. Such is the case for Ivan and Oliver Sutherland, argues Jules Older.

Except … we have no widely recognised family heroes where one tuatangata passes the mantle to the next generation.

It’s time we did. For the inaugural holders of this title, I nominate the Sutherlands — Ivan the father and Oliver the son. Both were (in Oliver’s case, still are) persistent truth-tellers, esteemed educators and brave warriors for social justice. Neither has received the recognition he’s earned, often at considerable personal cost. In Ivan’s case, possibly the cost of his life.

Born in Masterton in 1897 of deeply religious, Salvation Army, teetotaler parents, Sutherland was a high achiever from an early age. He did so well at Victoria University that he was scholarshipped to Glasgow, then London, where he earned a Ph.D. in the new and controversial field of psychology. He went on to lecture and administer at Victoria and Canterbury universities. He was a pioneering psychologist, anthropologist and philosopher.

But though Ivan excelled in teaching – endless academic lectures, radio talks, presentations – it was the pursuit of social justice that made him a hero. He fought for freedom of and from religion. He vigorously opposed the then-trendy and overtly racist Eugenics movement, argued for women’s rights and actively advanced workers’ education. Two issues drove him hardest: Māori rights/Pākehā wrongs and the plight of Jews escaping Nazi Germany.

Despite heroic efforts, Ivan’s entreaties on behalf of Jews in the late 1930s largely failed. New Zealand doctors, led by Otago Medical School, didn’t want competition from European physicians. Nor did others.

A case in point was Austrian tailor Paul Kaiser. In 1938, he was twice imprisoned for the crime of being a Jew, and more dire consequences clearly awaited. Ivan met with finance minister Walter Nash, explained the urgency of getting Kaiser and his wife out of Austria, adding that the tailor had a guarantor in Palmerston North, and assured Nash that Kaiser “could be employed at once”.

Nash turned down the application. Three months later, after being informed of the family’s “extreme distress”, he turned it down again. Nearly a year later, Ivan opened a letter from the comptroller of customs stating that the minister had changed his mind and “had decided to grant the desired permission”.

The Kaisers got as far as England; they decided not to continue on to New Zealand. Theirs was but one of many examples of the government’s reluctance to let non-white Brits into the land.

Ivan’s untiring efforts to change Pākehā attitudes toward Māori bore more positive results. Working with his close friend, Sir Apirana Ngata, and inspired by the work of scholars Peter Buck and Tūtere Wī Repa, Ivan championed the economic, cultural and social advancement of Māori. It’s said he was the first Pākehā scholar to recognise Māori for their own cultural beliefs and practices and regularly affirmed his commitment to a bicultural New Zealand.

A 2013 biography of Ivan, written by his son Oliver, was titled Paikea. Ngāti Porou had honoured Ivan by gifting him the name of one of their tipuna. Sleeping on meeting-house floors, eating when he could find a free moment, travelling to wherever he was called – his commitment ceaselessly drove him.

For this, Ivan paid a terrible price. Physically and emotionally, he wore himself out: lost weight, lost hope, fell into depression. In 1952, at age 54, high in the Port Hills of Christchurch, Ivan Sutherland took his own life.

Oliver Sutherland was only eight when he lost his father. Like his father, he excelled in school; unlike Ivan, he chose a profession as remote from social change as humanly possible. He became an entomologist, studying insects, not people.

But two things intervened. One was in his genes, or perhaps his upbringing. Oliver was raised largely by his mother, Nancy, who became a Labour city councillor in a family devoted to social justice. The other was a year at the University of California, Berkeley in 1969.

Though his field of study was insect physiology, Berkeley in 1969 was the epicenter of American protest against the Vietnam war, against rampant racism, against injustice. Under governor Ronald Reagan, California responded: National Guard troops marching on campus with fixed bayonets, aerial tear-gassing, even shooting student protestors. Oliver emerged with a new view … of New Zealand.

Until that tumultuous year, he’d been a firm believer in the much-repeated phrase, “New Zealand has the best race relations in the world.” When he returned home in 1969, he brought with him another phrase — institutional racism.

For Oliver, this wasn’t just a slogan. Fusing his scientific training with his new awareness of social injustice, he set out to document the plight of New Zealand children, predominantly Māori, who suffered terrible abuse in “child care”.

At the state-run centres of Owairaka and Lake Alice, boys were subject to electric shocks and solitary confinement for such sins as bed-wetting, smoking and, yes, running away. At Bollard Girls’ Home, girls as young as 11 were stripped, de-loused, humiliated, confined and subjected to forced tests for venereal disease.

Oliver interviewed these children, meticulously notated what they’d endured, then widely publicised their plight. Like his father, he was utterly dedicated and absolutely unrelenting. His work in the 70s proved instrumental in activating today’s royal commission of inquiry into abuse in care.

For his sins – creating awareness of our institutional racism and child abuse – Oliver was regularly denounced by governments, especially the 1970s Labour government led by Norman Kirk. Kirk’s minister of justice, Martyn Finlay, even threatened Oliver with “police investigation under the Official Secrets Act”.

It wasn’t an empty threat. One Saturday morning in 1974, Oliver and his wife Ulla opened the door of their Grey Lynn home to find three policemen presenting search warrants authorised by solicitor general Richard Savage. The Sutherlands’ home was searched, and that Monday, Oliver and Ulla were taken to the Central Police Station “for an interview.” They were likely only kept out of prison by a brash young lawyer, future Labour prime minister, David Lange.

Since then, Oliver has continued his essential work and last year gave evidence in the royal commission of inquiry into abuse in care. After his hour-long submission, commissioner Paul Gibson responded by thanking him for his ongoing efforts. “Thank you for persevering and waiting for 45 years for something more to happen,” he said. “We hope we can do something with that.”

Both Sutherlands have long been venerated by those continuing their work against injustice in this country. It’s time that appreciation spread across the motu.