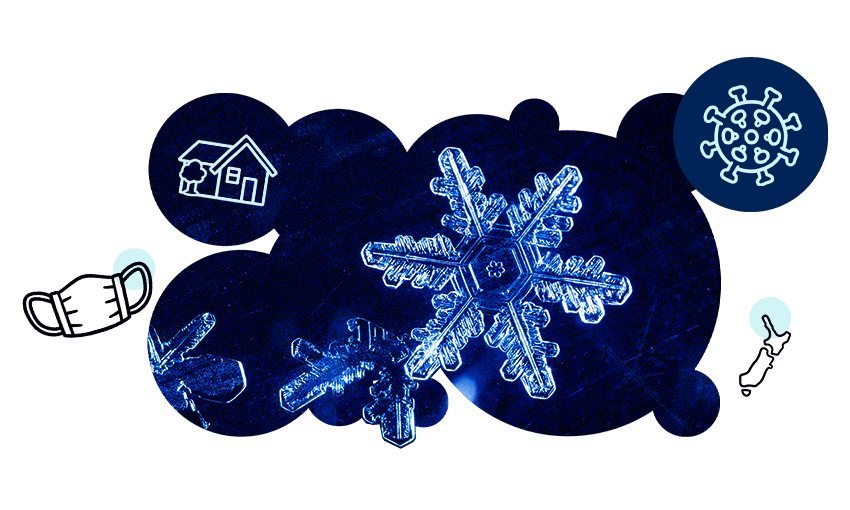 The depths of winter could mean a return to the Covid peaks of March. Image: Tina Tiller

The depths of winter could mean a return to the Covid peaks of March. Image: Tina Tiller

A new variant has added fuel to the winter fire, bringing a marked rise in cases and hospitalisations. And it will get worse before it gets better.

Whether or not we want to hear it, “post-Covid” is a misnomer. It is true that New Zealand avoided the worst ravages of the pandemic, by closing the borders before vaccines became available and amid the most severe variants. And yet today, across the most telling metrics for Aotearoa, numbers are not in fact declining. Nor are they plateauing. They’re discernibly angling up. “We’ve had one full week of consistent increases in cases,” said Covid modelling expert Michael Plank. “Broadly speaking it is very likely that we are at the start of a wave – and this is what we’ve been expecting for some time.”

There’s one sample group of 24 that sheets home the prevalence. Admittedly, we’re not dealing with a cross-section of society, and Labour ministers travel a good bit more than most of us, but still: of those 24 ministers, 20 have contracted Covid-19, including four who are currently isolating with the disease. So far, none has had the misfortune to catch it for a second round, despite the increasing reports of reinfections across the country.

The numbers now – and how high they could get

So much for ministerial infections. What picture do the broader measures paint?

The reported cases number substantially undercounts the true figure, given it relies on people testing and reporting positive results. But the direction is grimly clear. Yesterday saw 6,498 new cases, with the seven-day rolling average on the rise for the past 10 days. It currently sits at 6,878, the highest for more than a month.

As was clear from the start, hospitals are at the epicentre of the pandemic. In omicron, the impact is felt more sharply in ED than ICU, but that makes it no less capable of straining, sometimes to breaking point, resources that are already under massive pressure in the depths of winter. Last month, New Zealand emergency doctors said their departments were “under extreme and unprecedented pressure”.

Yesterday’s hospitalisation numbers are striking. The ministry reported 487 people in hospital with Covid-19. The last time that number was so high was 10 weeks ago, on April 26. Since falling to 300 on June 23, the number hospitalised has climbed across 11 days by more than 60%.

One of the reasons this has outstripped the growth in case numbers, Plank suggested, was the extent to which the disease has infected older people compared with the March peak. Case numbers among over-70s were “now at an all time high”, he said.

Covid’s death toll continues to mount. The total number of people who have died with Covid-19 in New Zealand increased by eight to 1,527 in yesterday’s update. The last seven days have brought an average of 14 deaths per day.

Recent days have brought warnings that case numbers could soar back towards the heights of March, when the average of new recorded daily infections topped 20,000. A number of unknowns are in play, but, said Plank, a professor at the University of Canterbury and chief investigator at Te Pūnaha Matatini. “It’s certainly possible we’ll see those sorts of numbers.”

A collision of factors

The resurgence in Covid in Aotearoa can be attributed to at least three trends.

Omicron BA.5 has established a foothold in New Zealand and it is moving fast. The data showed BA.5 “rapidly increasing” and expected to outstrip BA.2 as the dominant variant in the weeks to come, said Plank. The experience in places like South Africa, the UK and Portugal is instructive on its “growth advantage”, he said. “It’s much better at getting around our immunity.”

BA.5 has “managed to shapeshift a little bit of its spike protein”, so proving more “sneaky” against existing vaccines, according to immunologist Graham Le Gros.

As evidenced across the course of the pandemic – and in colds and flus forever  –  the coldest season propels the contagion. The explanation is straightforward. “One of the biggest impacts of being in winter is people tend to be inside more,” said Plank. The airborne coronavirus thrives in the “high risk environments” of enclosed, crowded spaces where ventilation is lacking.

That flu factor exacerbates the pressure on the health system. In 2022, after a couple of years with flu largely locked out at the border, a bonus of the Covid elimination approach, the floodgates have opened. Even without Covid, then, “hospitals are already incredibly busy because of the flu and other winter ailments”, said Plank.

As a population, we’re becoming less immune by the day. Our collective resistance – “a combination of vaccine immunity and infection-derived immunity” – is dimming, and that opens fresh chinks in the armour, especially against the more ravenous BA.5.

Last week the Covid response minister, Ayesha Verrall, announced that the reinfection risk – compounded by the spread of BA.5 – meant a change to the rule that had previously exempted anyone who had tested positive for Covid-19 from re-testing for 90 days. That has now been slashed by two thirds. As of today, if you experience symptoms and it is 29 days or more since your initial infection, you must test; if positive, isolate for seven days.

What can we do about it?

“Number one,” said Plank, “is still the vaccine. If you’re eligible for the vaccine now is the time to go and get it. This is still by far the best tool we have.”

While Ministry of Health statistics put the total number of people who have had two primary doses at a formidable 95%, that number drops to 73% for the third, or booster, shot. It is lower still for Māori (56%) and Pacific people (60%). Many people are now also eligible for a fourth dose. Covid vaccines remain free for all. More details are here.

Flu vaccines make a difference, too. They’re currently available via GPs and some pharmacies and free for anyone aged 3-12 or over 65, as well as for Māori and Pacific people over 55.

Plank also urged people to use masks indoors, to test if any symptoms crop up, and not to slacken on staying at home if you have an flu-like symptoms. As for government settings, there was a case to “expand the mask requirements”, he said.

Last week Verrall announced that the country would remain in the orange Covid setting. “Moving back to red is unnecessary at the moment,” said the minister in a statement. “We can continue to manage the virus at orange, but are putting in place a range of additional measures to help manage a recent rise in cases.” Those measures included the shift in reinfection guidance to 29 days and mask and ventilation provisions for schools.