When Anna Sophia’s son told her he was a boy, she primed herself for having to fight against social norms on his behalf. So far, thanks to a rolling momentum of social change, she hasn’t had to. But, as Connor explains, it hasn’t all been plain sailing.

My surprise baby “girl” MJ arrived in 2006, 21 years after her brother was born. He was also a surprise. I have been an unintentional parent for 35 years.

There are some things I am firm about. Strict bedtimes, eat your broccoli, have a great sense of humour, be kind and respectful to others, your mother is not your slave so keep your bedroom tidy. One child has been better at that than the other.

Aside from these boundaries, my children have had free range to explore becoming whoever and whatever they want to be in life. Like all parents, I’ve had to step in to bat for them when the adult world creates too many obstacles for them to navigate.

My eldest son is a magician/stuntman/chainsaw juggler. When he was a teenager in the late 90s, the overriding message from his schools, extended family and wider society was that he needed to do well at school so he could get a real job, and becoming a magician wasn’t seen as a viable option. I supported him all the way and bashed down a few walls in the process to make it happen. Turns out you can earn a good living and have a happy fulfilling life juggling chainsaws.

From the time MJ was walking, she played with boys. She would ask, “When am I going to be a boy?”

When she was three she went to a girls dress-up party and totally ignored the fairy or princess dresses, opting for the pirate suit.

I bought her clothes from the boys section in shops because she liked shirts with dinosaurs and superheroes on them and trousers with real pockets. She has the most stunning blue eyes so she looks great wearing blue. She was never going to wear a pink “Daddy’s little princess” shirt.

She liked having short hair and because of that, her name and the colour of her clothes, a lot of people presumed she was a boy. Eight boys, no girls came to her sixth birthday party.

When she was eight she said she was a trans boy. When she was 11 she grew her hair long and wore dresses. She said all that stuff about being a boy was just a phase. For a few years she was a girl. She started high school. She shaved off her hair.

Six months ago he told us, his family, that he was a boy. His name is Connor.

I instinctively primed myself for another round of fighting against social norms on behalf of Connor. A different fight from the one I fought for his brother. This one, a fight about finding your identity, living authentically as yourself and being accepted by mainstream society in 2021.

So far I remain on standby. I haven’t had to do anything. So far, Connor is his usual happy teenage self and life is ticking along nicely. Although since he became a boy his room is a lot messier. 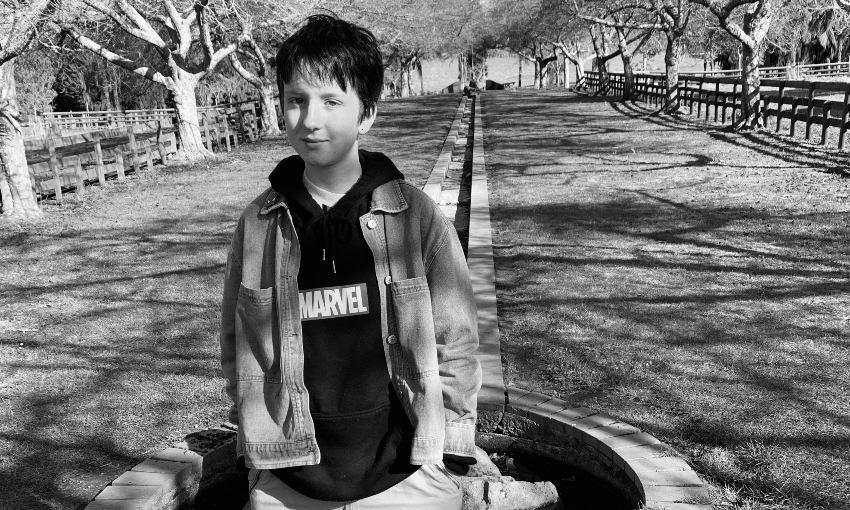 There’s been a rolling momentum of social change happening with LGBTQIA+ and the Gen Zs.

If you’ve been talking to any teenagers lately you will know that Connor and his trans friends are really no big deal for his generation. The teenage rainbow community is vast and parents and family members all over Aotearoa are learning very quickly to speak a new language consisting of many words they have never heard before and many more words that they used to use in a different context, like “they”, “them”, “non-binary”. I’m finding myself talking more slowly so I can be conscious of my language in case I misgender someone and offend them. Even when I’m talking to the cat.

I don’t want to be another cisgender heterosexual person trying to speak about what it’s like to be transgender when it’s not my personal experience living in this society, so I asked Connor to explain his experience of the world so far.

Anna: What’s your experience been like at school since you came out as transgender?

Connor: From things I read online and from hearing other trans people’s experiences, I do think I got the long end of the stick. I’ve received great support from my peers, family and teachers. But this is not to say I am frolicking in the sun with everyone who knows I am trans.

I don’t go a day without being misgendered, whether it’s on purpose or just an accident, but sadly enough, misgendering isn’t the worst of it.

I have come home in tears because of my cisgender, heterosexual (cishet, if you will) classmates expressing their opinions of me in not so nice ways.

I do cheer myself up by thinking how ironic it is that these people get so annoyed over things that have nothing to do with them. Does it really affect them that much that I don’t have a penis?

Anna: Your latest school report was funny. It was a mix of all your names with a sprinkling of they, she and he pronouns. I think on the whole the teachers and admin staff are trying their best but there is still a lot of confusion.

Connor: I don’t want to bash anyone because I know it is hard for older people to keep up with pronouns, gender etc but it did make me quite grumpy how much they managed to mess up so many things in the report multiple times.

There was one point, I think it lasted about a week, where I would be called into the school office to sort out my pronouns and gender in the school system every day. I ended up having the same exact conversation over and over again and it got quite frustrating.

Lots of people just can’t comprehend or simply don’t accept the fact that people transition to their real gender. That bursts my bubble, not only because it makes life harder for me and other LGBTQIA+ people, but because they aren’t educating themselves.

In this day and age it is a more common thing to be transgender, not because it’s “trendy” but because we are being accepted (mostly) and it is normalised in society, and if teachers and admin staff can’t deal with that, I think they’re going to have a difficult time if they continue teaching for the years to come.

Anna: You know that as a counsellor, and knowing the suicidal history of family members within our own whakapapa, I am really concerned about the mental health of trans people. The Youth19 survey found that “57% of trans youth had significant depressive symptoms and an equal number had self-harmed”.

Are you doing OK? Who has got your back?

Connor: I do feel that I have lots of support from my friends and family but as much as I hate to say it, mental health professionals have failed to help me with my trans problems.

I can see that there are not many transgender-specialist counsellors in New Zealand, especially in Palmerston North, but counsellors have just failed to give me support in general and I end up more peeved off at the counsellor than happy.

Saying that, I don’t feel that I actually need to go to counselling as I’m pretty happy with my self and feel supported in my transition.

It’s my future that I am more worried about. It is general knowledge among trans folk that you need to visit a counsellor or someone who specialises in transgender people’s mental health for quite a long period of time for them to give the all good to a doctor to prescribe you HRT (hormone replacement treatment), which is vital to medical transitioning. Some trans people choose not to go on HRT and that is totally valid too.

Going on testosterone is something I plan on doing in the future and from my experience with mental health professionals and what I’ve heard from lots of my older trans friends who are struggling to get HRT, I am nervous for what’s to come for my medical transition.

Anna: With such a high rate of trans people experiencing depression, I guess you know a few trans people struggling with life. What are the main reasons they are struggling?

Connor: Just treat us like a person. For me I like to just get treated like a cis boy but a lot of the time I do get separated into my only little box, and even if people are trying to be more inclusive by having a special group for trans men, it does make me feel uncomfortable and isolated.

Some people are a lot more open than others but for a lot of trans people, we don’t appreciate every conversation we have being about us being trans. I have a regular life like everyone else and I have plenty to talk about. I play the drums and guitar. I make music. I was in the school production. I’d say unless you’ve talked with that person about it, just treat them like any other person you’ve met.

At the end of the day it’s really just about keeping up with names and pronouns – definitely make it a habit to ask people their pronouns and names because even though it’s a little thing, it makes trans people a lot more comfortable with you and themselves.