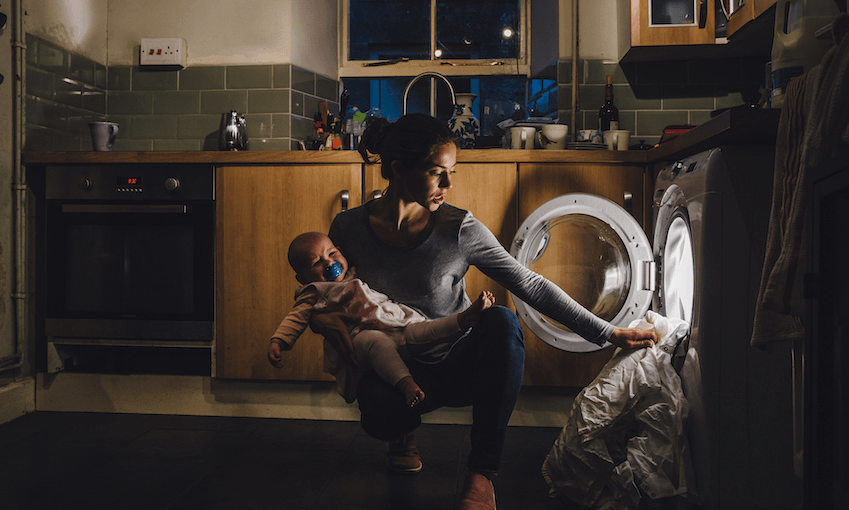 While the gender gap is narrowing, women still do seven hours more housework per week than men (and that doesn’t include the child-caring). Getty Images

Sorry men, there’s no such thing as ‘dirt blindness’ – you just need to do more housework

While the gender gap is narrowing, women still do seven hours more housework per week than men (and that doesn’t include the child-caring). Getty Images

The old saw about men being less capable of noticing household dirt isn’t the reason they do so much less housework than women. The truth is, it’s all about gendered expectations.

The problem with housework is that it is never-ending drudgery. As soon as the floor is cleaned, the dog throws up, the kids spill slime ingredients into the wood grain, and the tradie walks through the house with well-oiled work boots. And the cycle begins again.

The Danish use the word hygge to describe the feeling of cosiness, warmth, and comfort that a well-kept house is supposed to provide. Yet creating this pleasant environment requires work and, unfortunately, the bulk of that work is done by women.

In Australia, findings from the latest Household, Income and Labour Dynamics in Australia (HILDA) report show that men have increased their housework time by 55 minutes and women have reduced theirs by two-and-a-half hours per week. So the gender gap in housework is narrowing.

Yet women still do seven hours more housework per week than men. Do women just have a love of cleaning that men do not share? Or are men “dirt blind” – unable to see the mess as it emerges and takes over the sofa?

Fortunately for humankind, the answer to both of these questions is no. Below, we unpack some of the main reasons why women’s housework share remains larger than men’s, and offer solutions to tidy up this gendered mess.

Men and ‘dirt blindness’ is a myth

While attitudes towards gender roles have become less traditional, there are still gendered expectations about cleanliness of the home and children.

Any dirt, mess or failure to provide clean, immaculately dressed and polite children to the world is most often a judgement against women – a sure sign of bad mothering. Inherent in this assumption is the idea that men don’t see mess, or are oblivious to the cleaning and mental work associated with ensuring that the household runs properly.

Even when housework is outsourced, women are more often responsible for organising and paying the cleaner, or hitting the button on the full dishwasher or robot vacuum.

What’s more, the types of domestic work that are outsourced is usually the work often done by men, such as gardening or household maintenance. So the benefit of domestic outsourcing is usually marginal for women.

Because of men’s lack of desire to twirl a brush around the toilet bowl, or their general lack of concern about having a clean house, we tend to think of them as being “dirt blind”. But really it’s because men aren’t penalised for messiness in the same way that women are.

For women, cleanliness in the family home is a further extension of prevailing social norms dictating that women must be clean, hairless, perfumed and pretty. In this regard, doing housework is a way for women to “perform” their gender.

Men not doing housework also fits with long-held ideas about men and dirt that begin with boys and the outdoors. Thus, keeping house is as much about gendered expectations as it is about actual dirt. Men do see dirt, but they aren’t told from a young age that leaving a mess makes them bad men.

In 2017, Australian women earned 87 cents for every dollar earned by a man. The gender pay gap in Australia has hovered between 15% and 19% for the past two decades.

Mothers, regardless of their profession, earn less than fathers, indicating that gender discrimination, rather than competence or occupational type, explains these gaps.

In other words, as women’s earnings exceed men’s, these earnings become a less valuable bargaining tool within a relationship. A recent study from the US census shows that women who earn more than their partners under-report their own and overstate their husbands’ earnings.

So arguments that women can use their higher earnings to negotiate for husbands’ greater housework contributions do not hold true.

Closing the gap in housework

A recent study about housework posed a dire warning: at the current pace, it will take 30 years for the gender gap in housework to close. This is unlikely to eventuate unless we dramatically rethink the way men and women organise their work and family lives.

But there are a few ways forward. First, governments can provide help in the form of subsidies to hire cleaners or buy prepared meals to help families reduce their housework burden.

The Swedes have instituted a tax credit for housework to help reduce the family’s load and to bring this type of black-market labour into the light.

The second is for women to reduce their housework to similar levels as men. Based on current estimates, this means women will contribute 55 minutes per week. We could call this a housework strike – a way to draw attention to the unseen housework that women do and to encourage men’s equal contribution. This will require women to become “dirt blind” and hold out until a crisis point is reached, such as everyone in the house running out of clean underwear.

However, women still do more childcare than men, so this won’t solve all of women’s domestic woes. The final solution is for men to see housework for what it is – drudgery that we all have to do in order to achieve hygge. Men have heeded the call to increase their time with children – now a housework revolution is necessary for us all to relax.

Leah Ruppanner is a senior lecturer and Brendan Churchill is a research fellow at the sociology department of the University of Melbourne.