The fate of Māngere’s much-maligned cycle path network has become something of an obsession for Justin Latif. Now, he writes, solutions are being proposed – but not all are being welcomed by the community.


I have the strange honour of having written several thousands of words about Māngere’s Te Ara Mua Future Streets cycleways for several different media newspapers and websites since its construction in 2016. My most recent piece was in fact the first thing I wrote at The Spinoff.

The reason for my slight obsession is that like any good story, it has a heroic protagonist – Teau Aiturau, or Mr Tee as everyone knows him. He is Māngere’s undisputed king of cycling, and he holds countless events and workshops teaching bike skills to hundreds around the area.

This story also has a community which is fed up with being dictated to – and, in this instance, frustrated with losing car parks for an expensive project that seems to lack users.

But unlike a Hollywood movie, it’s not so easy to pick out the bad guys. Sure, it would be easy to blame Auckland Council and Auckland Transport and their bevy of consultants. But all these parties have also funded countless co-design sessions, activations and engagements. They’ve also refused to simply walk away, despite many in the community and people like me in the media giving them a hard time.

Of the long list of complaints about these paths, there are two key issues that have been identified to me as being fixable. The first is that these cycleways don’t connect to any existing paths around the area, making it harder for keen cyclists to ride them. Secondly, there isn’t a focal point to promote cycling from, for those who aren’t yet hooked. Bike hubs exist elsewhere in Auckland and seem to successfully engage novices, while also providing basic mechanical repairs. Such a hub located next to the cycleways would surely get more people engaged in this healthy and relatively cheap way of getting around.

To my surprise, just as this hellish year is winding up, the cycling gods seem to have conspired to offer a solution to both these issues. 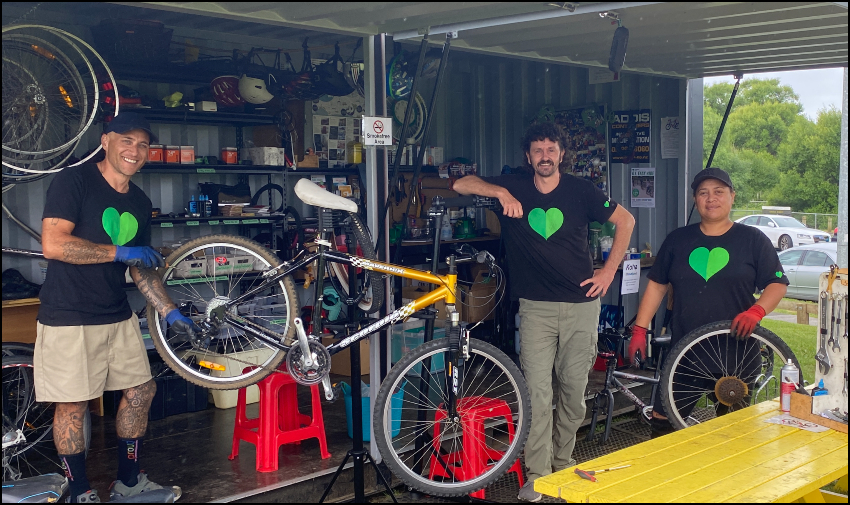 After years of addled bureaucratic and political processes, it looks like a bike hub is set to be established this summer, pending the approval from the Māngere-Ōtāhuhu Local Board and Auckland Council’s Parks department.

Aiturau, who’s been running his charity, Māngere BikeFit, from a large shed hidden away at the back of a park, has teamed up with EcoMatters Environment Trust’s Brent Bielby to establish the Māngere hub.

Bielby has already set up hubs in Henderson, New Lynn and Glen Innes and says this new hub will merge all his organisation’s experience and resources with Aiturau’s skills and network of relationships to get more people turned on to cycling.

“We want to partner with Teau, to set it all up, help with the operational models around health and safety and all those things, but it’ll be Teau and his crew running it, and that’s how it’s been wherever we go,” he says.

Bielby says his background as a former council staff member helps ensure local groups like Aiturau’s get the support they need to meet the council’s complex compliance requirements.

“It’s always been about empowering locals to do it – while bringing a bit more knowledge and experience. And because of our reputation, we’re able to attract funders and we also know how to do the reporting that funders require.

The hub will provide novice cyclists with free advice and support, along with some free parts to get people moving. It will also be a place to sell or trade bikes, and to learn how to maintain them.

“So when people leave us, we know they’ll be safe.”

Aiturau says the hub will be the realisation of a long-held dream to create a place in the centre of Māngere where people can engage with the pleasures and possibilities of cycling.

“It will help us amp up cycling to another level. It will be easier to run events. People will be able to see what we do, it will be somewhere they can get their bikes fixed, and we can add all the other stuff like events and taking group rides.”

As a bonus, Aiturau says, the hub will encourage people to use the controversial cycleways and hopefully reverse public opinion that they’re an under-utilised waste of money.

“This will get people using the cycleways – because it’s [located] right on the cycleways. Kids are always going to be interested, but this will definitely help engage their parents.”

Toni Helleur is a crime prevention officer for Māngere Town Centre, where part of her role involves encouraging youth to engage in positive activities so they spend less time causing trouble for shopkeepers. She says a cycling hub could be a huge plus for the community.

“The kids have said they just want things to do, and by having Mr Tee based right next to the pools, the town centre and Future Streets, it’ll create a really positive focal point for our youth. Plus it will really help our youth get into cycling, possibly work experience and learn some helpful skills along the way too.”

In a statement, Māngere-Ōtāhuhu Local Board chair Lemauga Lydia Sosene said the local board is generally supportive of Aiterau’s pro-cycling activities, but won’t comment on the hub idea until all the details are presented at tonight’s local board meeting. Teau Aiturau leading a group of children on a ride at a cycling event he ran on Labour weekend. (Photo: Justin Latif)

Back to the future: Connecting up the cycleways

While a bike hub appears to enjoy broad support among the community leaders I’ve spoken to, a proposal to upgrade the walking and cycling network in Māngere has raised the ire of many residents.

Auckland Transport is proposing five upgrade projects around Māngere, all with the aim of ensuring better connections between the existing walking and cycling networks in the area.

The proposal to build a protected on-road cycleway through the Māngere Bridge village is drawing the majority of the outrage. An informal poll conducted on the Māngere Bridge Community Noticeboard Facebook page had 53 votes in favour of the proposed cycleways, and 602 against it. And on December 16 a community meeting will be held as part of a growing campaign to block its construction.

“Māngere Bridge Primary school is against it, and we’re getting cyclists approaching us, saying they’re against it, Our main points are that it’s a heavily congested road already [and] that it is already short on parking, which will make it not useful at all for residents or those conducting business,” she says.

“I could almost accept a cycleway, if it wasn’t for the huge ugly concrete partitions. And I don’t believe one parent would let their children ride down Coronation Road, even with the partitions, given the amount of trucks and heavy traffic we get.”

Anderson would like Auckland Transport to consider other route options or designs. “It’s a joke – it’s a joke for the community and it’s our money,” she says of the current plan.

Bike Auckland’s Barb Cuthbert has worked with Auckland Transport on the design of these proposed changes. She encourages people to take part in the consultation, so their opposition can be taken into account, but also wants to highlight that the section down Coronation Road – Māngere Bridge’s main shopping thoroughfare – is only one of five upgrades being proposed.

“A huge number of people from Māngere and Māngere Bridge work in the airport precinct. And what we’ve heard from employers from the airport is that their employees want to cycle to work, but it’s not safe enough.

“So if the roads were less dangerous would it be easier for people to cycle? And if the problem is the concrete bollards is there something else they could suggest to make them look better?”

Cuthbert also emphasises that the proposals include cycleways that will connect people up with popular amenities in the area.

“We shouldn’t throw the baby out with the bathwater. Quite a big feature of this project is a cycleway through Centre Park, which will be an all-weather, lit path, from Moyle Park across the motorway to Robertson Road.

“If these [cycleways] don’t happen, the money will go elsewhere. And Māngere will miss out altogether.”

Local board chair Sosene also wants locals to take part in the cycleway consultation, and encourages people to think about it from a climate perspective.

“Choosing cycling to move around in the community not only helps to keep our communities active but also to reduce congestion by having fewer cars on our roads. Having dedicated cycleways will make sure our cyclists are safe on the road.

“With the declaration of the climate emergency in New Zealand, it is more important than ever that everyone plays their part in reducing the emission levels. It has to be a collective effort.”

An Auckland Transport spokesperson says the design of the proposed cycleways aren’t set in stone – if people would like different options, it’s vital they provide that feedback.

“We are currently investigating the opportunity to offer community co-design workshops next year. This gives us the opportunity to understand the initial feedback from the current consultation, and work with relevant key stakeholders as the best way to refine the proposed designs.”

Whether all these changes deliver on the aspirations of the original cycleways remains to be seen. But if there’s one thing this year has taught us it’s that going hard and early can be a better approach than slow and incrementally. As housing density increases and public transport gets more accessible, owning a car will become less feasible, but the change in mindset and behaviour  required for more people to cycle is massive. Commuting to work, transporting children, negotiating hills and bad weather all make cycling a very hard sell for families.

Just building infrastructure isn’t enough; we need to support cycling evangelists like Aiturau and Bielby. After all, they’re the ones who can help us make these hard lifestyle changes – changes that will eventually become a necessity, not just a trendy alternative to driving.

Consultation on the proposed cycleways closes on December 13, 2020. To have your say, go to the Māngere Town Centre Library on Thursday December 10, 4-7pm, or visit the Auckland Transport website.