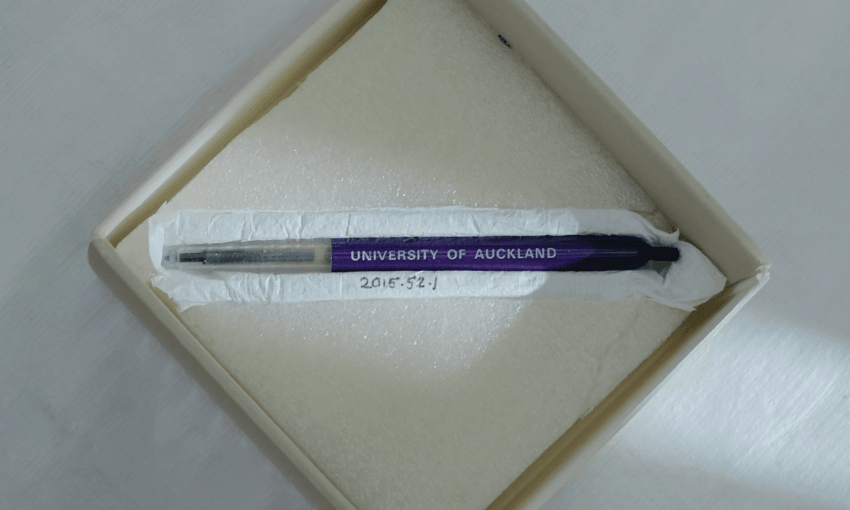 The Single Object: How this pen was used to highlight police racism

One morning in 1978, a University of Auckland law lecturer walked into the police station and made a confession. His crime? Stealing a ballpoint pen from his employer.

Iki Toloa finished his shift at the Ellerslie plastics factory where he worked and started the long walk home to Ponsonby. The 17-year-old from Niue made it as far as Karangahape Road before being stopped by police, who noticed a plastic comb in his back pocket.

This was in 1978, the era of Dawn Raids, when police were overtly targeting Pacific Island migrants. “It was normal to be pulled up by police and checked over, demanding to know where we were from, where we were going,” remembers Polynesian Panthers activist Tigilau Ness.

Toloa was arrested and spent the night in the cells. The next morning, he pleaded guilty to theft from his employer.

University of Auckland law lecturer David Williams read about the arrest in the Auckland Star the following day, then called a fellow activist. “What we were planning was to make a joint press release to complain about it,” Williams remembers. “But when I put the phone down, I thought … why don’t I do an action this time?”

Williams took a University of Auckland pen home with him that day. He called the Auckland Star reporter and told her to be at the police station first thing the next morning. “I presented myself to the police sergeant and said: I’ve come to hand myself in for the theft of a piece of property of my employer.”

The story of Williams’ unusual confession made the front page of the next day’s paper, causing a public outcry. His action had worked. He was never convicted – and more importantly, neither was Iki Toloa.