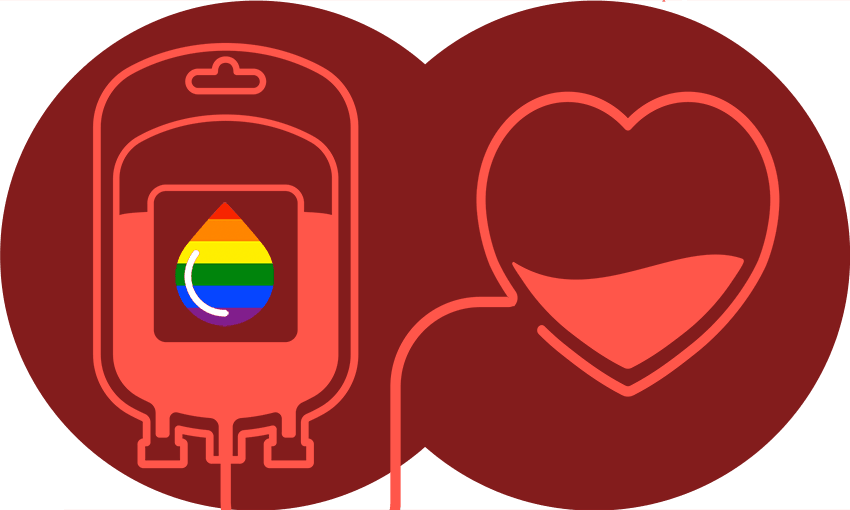 Screening potential donors is necessary – but does effectively banning sexually active gay men still make sense? It may not be as black and white as it seems.

Despite recent news stories such as the critical shortage of A+ blood, authorities here continue to resist pressure to overturn the ban on blood donations by gay men. Just last month, Canada lifted its own “gay blood ban”, prompting the question: is Aotearoa now out of step internationally?

Aotearoa has historically been a leader in the field of blood donation. But maintaining the safety of the blood supply now comes at at the cost of stigmatising a community with an unfortunately rich history of social and policy discrimination. So is anyone actually doing anything to change the situation? To understand the direction we are heading in, we have to start at the beginning.

In the early 1980s, after an increasing number of heterosexual haemophiliacs came down with what used to be known as the “gay-related immunodeficiency disease”, experts made the connection between blood, homosexuality, and HIV/AIDS. Shortly thereafter, banning gay men from donating blood became a global phenomenon. These policies still persist to this day due to the ongoing global HIV epidemic.

Here, restrictions on gay, bi, and other men-who-have-sex-with-men (MSM) would not exist until the development of the New Zealand Blood Service (NZBS) in 1998. Although it’s now known as a “deferral’ policy”, NZBS’s stand-down period of three months for men who have any sex with other men is effectively a “ban” for most gay men.

Gay men are understandably upset and many view this policy discriminatory. As a policy, it dangerously perpetuates outdated myths around the dangers of gay sex. However in the sea of opinion pieces, most fail to consider the most critical role of the blood service: to keep the blood supply safe for those in need.

In order to protect vulnerable blood recipients, around 20% of all first-time donors are prevented from giving blood for a variety of reasons. You may have recently injected drugs, or perhaps you lived in the UK during the 1980s and 1990s so you’re at risk for passing on bovine spongiform encephalopathy, or mad cow disease.

Whether we like it or not, MSM in New Zealand are 348 times more likely to be diagnosed with HIV than their heterosexual counterparts (the global rate is estimated at 28 times higher). Despite our low population prevalence, there is an HIV epidemic concentrated among gay men in Aotearoa.

With that in mind, is the policy discriminatory? Or is the exclusion justified? I believe there are elements of both. Singling out gay sex as dangerous is definitely in bad taste considering the history of oppression towards the community and the now availability of effective HIV prevention strategies. But in our country, the NZBS is justifiably risk-adverse because gay men pose a relatively higher risk of passing undiagnosed HIV onto blood recipients.

You can see the conundrum researchers face when trying to discuss the complexities of blood donation. Is there a way we can strike a fair balance?

Places like the UK and Canada have recently adopted an individualised risk assessment approach to their blood donor policy instead of a blanket exclusion on MSM. Every presenting donor is assessed on their “high-risk” behaviours – the number of recent new partners, for example, or intravenous drug use – regardless of sex or gender.

Decentralising the issue of sex between men removes the inequality at the heart of the gay blood ban. An individualised approach also reduces the social harm that the current policy perpetuates through its association of gay men with dangerous sex. Remember, gay sex itself doesn’t carry risks of HIV – what matters is how you have sex and who you have sex with.

An individualised approach also allows for low-risk MSM (e.g. those in monogamous relationships) to safely donate blood. In Aotearoa, researchers estimate there could be as many as 35,000 extra eligible donors per year who currently can’t give blood.

Adopting this new approach seems like a no-brainer, right? Not quite.

Firstly, remember there is no guarantee that the number of eligible donors will increase with an individualised risk assessment approach. It’s possible that the threshold for “low risk” individuals might remove more eligible heterosexual donors than it adds MSM donors. Secondly, while it makes sense to look to other countries for policy guidance, a blood donor policy for Aotearoa must be tailored to our specific HIV epidemiology. The problem we run into here is that we simply do not have the up-to-date data we need. For example, the last HIV behavioural surveillance study was undertaken in 2014, well before the arrival on the scene of pre-exposure prophylaxis, or PrEP, a daily pill which greatly reduces your chances of acquiring HIV.

Late last month, the University of Auckland’s Dr Peter Saxton, in partnership with the NZBS, launched the Sex and Prevention of Transmission Study (SPOTS), which aims to collect data to fill this evidence gap.

“Ultimately we all want blood donation to be more inclusive, but also safe for blood recipients,” says Saxton. “The [NZBS] lacks evidence to improve the policy further. Our study will be the first to provide that evidence.”

As a gay man myself, I feel that calling the gay blood ban “discrimination” wrongly ascribes malicious intent, especially when the policy aims to provide Hippocratic oversight in managing real threats to real vulnerable patients. Perhaps “outdated” is a better term for a policy that has not yet adapted to the new ways in which MSM can practise safer sex or to the new tools available to prevent HIV transmission.

As long as there’s no substitute for blood, discussions around blood safety and blood donor policies will continue to be contentious. The inherent social and epidemiological complexities of the subject make that unavoidable. Future policymakers will need to carefully walk the tightrope to ensure blood donor policy is inclusive and fair, while maintaining the safety of the blood supply and all patients who rely on it.

Tony Koson Sriamporn is a public health and health psychologist researcher who has worked in the HIV sector since 2018. He is completing his doctoral research in the School of Population Health at the University of Auckland, focusing on blood donation among gay and bisexual men in Aotearoa within the SPOTS project.