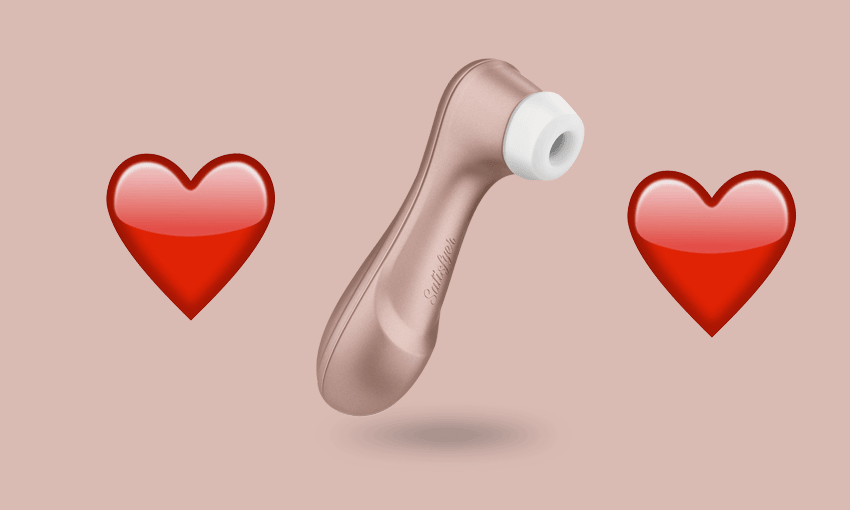 The sex toy everyone is talking about

I know exactly when I first read about the Satisfyer Pro 2. Still shaking, my friend had taken to Instagram to spread the gospel, writing that she’d had the best orgasm of her life with it.

I looked it up and since it was on sale, I ordered it straight away. It arrived quickly and it took a while to find some time to be able to use it, what with children always up all night and in my bed. I finally got a chance to try it out on a weekend away. And my life changed forever.

I had an orgasm in seconds. Literally seconds. Figuring it was a fluke, I tried again the next day in the shower. NOT A FLUKE. I almost broke my damn leg falling over. I felt like I was in someone else’s body. It was so incredible I immediately messaged all my girlfriends and told them about it.

I wrote a short review of the Satisfyer Pro 2 on my website. It sold out and I had angry women asking where else to get it. That’s when I heard there were other versions. Like the terribly named Womanizer and the even more horribly named Tracy’s Dog (who the fuck is giving out these names? They’re awful). Then I found out there were fan groups for each one – cult followings and attachments you could try. I was in awe.

Soon, it felt like everyone I knew was obsessed. Someone would comment they didn’t orgasm straight away and everyone would rush in with tips (you need to use a lot of lube. Like lots). A few hours later an update: it worked!

I shared the gospel in a Facebook group and the responses came thick and fast (no pun intended). The most common one was: “I finally got a chance to try this out. It is literally (and I actually mean literally, not figuratively) the first sex toy I have ever been able to orgasm with”. My personal favourite was the woman who called in sick the next day to recover.

It felt like we were all sex educator Betty Dodson transplanted to 2019. Our Hitachi Magic Wand was now the Satisfyer or the Womanizer – rechargeable, waterproof and with a two-year warranty.

In case you didn’t know, the Magic Wand sold out all over the world after being featured on Sex and the City. But long before that it had a secret cult following thanks to the Betty Dodson Technique of placing a towel over your clitoris and using it to bring yourself to orgasm. I wonder what she thinks of the Satisfyer which needs no towel and really no expertise at all.

Clitorial suction devices are, in my opinion, the future. At a time when technology seems so evil, it’s wondrous that someone has done something good with technology. To whoever has spent their days trying to make a device mimic oral sex (and mimic it so well) I just feel like they should get a Nobel peace prize.

According to studies from the Archives of Sexual Behaviour, the majority of women need additional clitoral stimulation to reach climax. Only 65% of heterosexual women with vulvas have consistent orgasms during sex with a cisgender male partner. This number increases to 86% for lesbian women and 66% for bisexual women.

I have no idea how the Satisfyer or Womanizer works. Apparently it uses air technology and “pulsing” and “sonic waves”. They call it suction based but I can’t really describe how it feels – it doesn’t feel like that. The best part is probably that they’re not tongues.

The last well known oral sex stimulator was literally a row of tongues on a wheel. Who on Earth would think we would want that? It’s a nightmare.

And it’s probably for that reason they’re getting press. I’m sure you’ve seen headlines around: “The sex toy so good it made a woman pass out” or “Woman’s hilarious review of sex toy”.

When life is busy it’s understandable that a toy that gets you off in seconds is popular. “I can literally take 30 seconds out of my busy day and have some me time” was a common comment in my admittedly small survey.

“Of the two, the Satisfyer comes out on top in sales. It’s certainly one of our most popular brands, taking out several spots in our top 10 highest selling toys. The Satisfyer Pro 2 regularly claims the top spot as the best-selling toy week after week.”

Jess Wilde of adult brand Lovehoney says they’re flying off shelves there too.

Which toy comes out on top between the Satisfyer or Womanizer depends on who you speak to. I couldn’t afford both and after buying the Satisfyer, I don’t need anything else. Some swear by one over the other. My unscientific survey found a higher rate of orgasms for the Satisfyer than the Womanizer. But more people had bought the Satisfyer and I can’t do maths. For the name alone, I won’t buy the Womanizer (yes, I’m that petty).

Some did raise the “wee” phenomenon that both have caused due to positioning the toy on your urethra rather than your clitoris. This causes some people to wee. Some also describe the orgasm as painful and “as if it is forced out”. Others say there’s far too much stimulation (some advise you to wear underwear and use it over top).

Still, it seems worth a try when the very next comment from someone is: “Craziest most amazing orgasms of my life. Telling you about it makes me want to buy another one.”