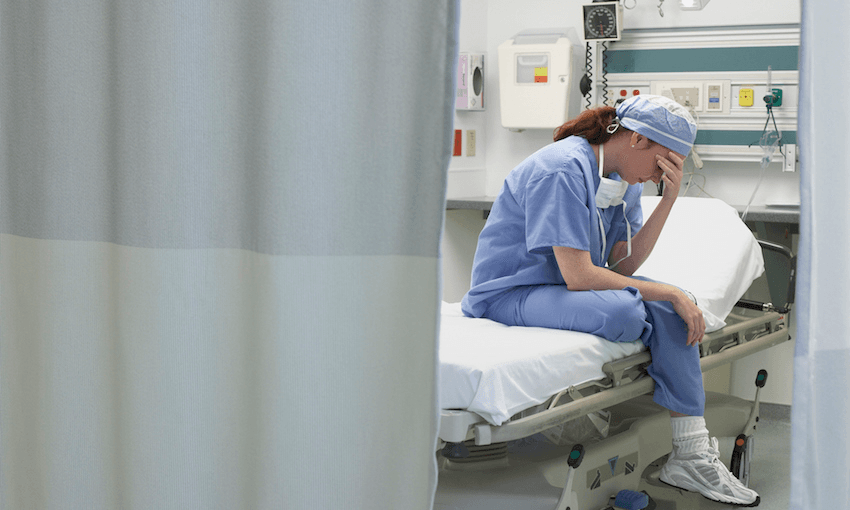 The doctor will not see you now: why resident doctors are striking for safety

The strike is about protecting an established deal on working conditions that keeps both patients and doctors safe, writes resident medical officer Dr Sofie Rose.

It’s 10pm on a Sunday night. I’ve been called to see an elderly patient with a kidney stone (NB: all patients described here are loosely based on my experiences as a doctor, to protect confidentiality). He has started vomiting – he’s been receiving morphine through the vein because that’s the only thing that will settle his pain, and IV morphine can make you vomit. Except now he’s vomiting up blood. I answer the page, calling the nurse back to ask his vital signs, how much exactly he has vomited, and a bit of his background. The tension melts from my body as I hear his blood pressure and pulse are normal – he is not bleeding out.

Thirty minutes later and I am at handover, the man who was vomiting up blood is all sorted, after a frenzied conversation with the surgeon on call, having to insert two large IV drips into his arms, run a lot of blood tests and organise a special fentanyl pain machine for him. The night doctor asks if I have anything to handover; I let her know about the sick patients, and then scurry off to finish my jobs – some results to follow-up on, and an elderly lady with a broken hip to quickly admit, though she arrived much earlier in the night.

I was paid to finish at 10:30pm but I finish at 12:15am, after I find that admitting that elderly lady was not “quick” after all. She does not know her own name because her dementia is so severe, her kidneys don’t work, and half of her face is swollen and bruised because she hit her head when she went down. I sign that she is not for resuscitation because my registrar is scrubbed into an operation; they should be the one to do it, but they are busy saving someone’s soon-to-be-dead leg. My signature will do for 24 hours.

I have been a doctor for seven weeks. I have been at work today for over 17 hours. I am on day seven of a ten day stretch; I worked a 15-hour day yesterday, and another earlier in the week. My ‘usual’ eight hour days are hardly ever only eight hours. I will breach the “eight-hour sleep” rule written into our contract, as I am due back at the hospital at 7am. My name is Dr Sofie Rose, and this is my new life as a resident medical officer (RMO). I am proud to work alongside near 3,500 other RMOs who share these working conditions. These are the ‘safer hours’ that were hard fought for in 2016 by our union. Prior to this, 12 days in a row with no breaks was the norm.

Tired. Doctors. Make. Mistakes. Safer doctors equal safer patients. The successful 2016 campaign saw the 12 day stretches gone, and in their place are two “rostered days off” after working a weekend, reducing the stretch to ten days. The reduction in hours came with an associated reduction in pay – a compromise we made for our safer rostering.

The following year Sam Hazeldine, a Kiwi doc, campaigned for self-care and personal well-being to be written into the Hippocratic Oath, the pledge that graduating doctors around the world swear to always ‘do good and do no harm’. We now must do good by ourselves too. In February 2018 our contract for safer hours came up for renegotiation, and our union, the Resident Doctors’ Association (RDA) have been bargaining with the DHBs ever since. Next month, the year of bargaining will be up. Our contract will be gone, and with it our reassurance of safer hours.

We are striking for a few simple reasons:

In short, this strike is to keep the status quo of ‘Safer Hours’ rostering, not take a pay cut for it, to keep our rights and to keep our RDA protection.

This job is at times (if not often) emotionally exhausting. I care for people in pain, I care for people as they heal and convalesce. I comfort them as they cry, I watch them smile, and smile with them. I carry the burden of knowing their illness before they do, and sit with them and their whānau as they begin to process the bad news that I have just broken. I see people ride the rollercoaster that is life when someone is unwell; blood, sweat and tears – come what may. I see people dying, and I see people die.  When my patients and their families tumble through these ups and downs, it is my every day in caring for them.

It was so disheartening to hear that we needed to strike again for our voices to be heard. The ‘Safer Rosters’ campaign was such a step in a positive direction. Compassionate doctors need to be treated with compassion too.

Sofie Rose is a recent graduate of the University of Otago, now working as a House Officer, revelling in the ups and downs of life as a new doctor. She comes from a long line of female doctors, who fought hard for their ‘place at the table’ and for their voices to be heard, hence her passion for safer rostering and advocacy for work-life balance for doctors.