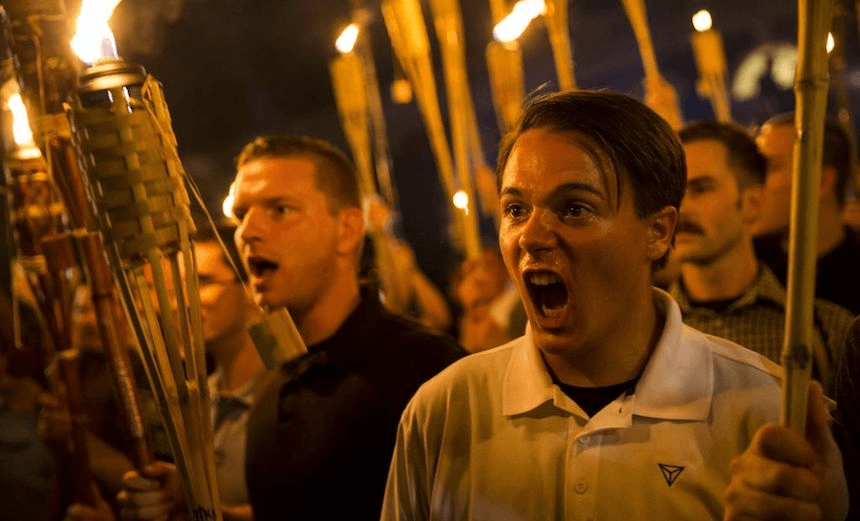 Peter Cvjetanovic (R) along with Neo Nazis and White Supremacists, encircle and chant at the base of a statue of Thomas Jefferson after marching through the University of Virginia campus with torches in Charlottesville, USA on August 11, 2017. (Photo by Samuel Corum/Anadolu Agency/Getty Images)

Peter Cvjetanovic (R) along with Neo Nazis and White Supremacists, encircle and chant at the base of a statue of Thomas Jefferson after marching through the University of Virginia campus with torches in Charlottesville, USA on August 11, 2017. (Photo by Samuel Corum/Anadolu Agency/Getty Images)

The horrific events of last weekend at the white supremacist rally in Charlottesville, Virginia, brought back memories for Hye Ji ‘Erica’ Lee, a Korean New Zealander who studied there six years ago.

In 2011 I was a student at the University of Virginia in Charlottesville, as part of an exchange programme with the University of Auckland. Set against a backdrop of reds and golds, the university during fall semester was the perfect image of American college life that most Kiwis probably have in mind: UNESCO World Heritage site campus architecture, beer-keg-frenzied frat parties, the sacred sisterhood of sororities. And the people. Oh the people! With their teeth-filled smiles, the gloriously optimistic students – they call themselves the ‘Hoos’ (short for ‘Wahoos’) – were the true gems of this college town. In their American twang, they welcomed me with open arms. In no time, I too was a ‘Hoo’.

At UVA I experienced a sense of tremendous openness, solidarity and pride in a community of progressive young adults. Their ambitions and self-belief exceeded anything I had come across at home in Aotearoa. I had never felt so inspired to dream bigger; more importantly, I’d never felt so accepted. Being a 1.5 generation Korean New Zealander, daily racial micro-aggressions, and sometimes plain overt racism, were a familiar occurrence. Fob, ching chong, slits for eyes. “Your English is so good.” “Where are you really from?” And often, the dirty way the word ‘Asian’ can be used to demean.

In Charlottesville, literally no one, not even once, asked me where I was from based on my racial appearance. It was only when I spoke that my New Zealand accent prompted excited questions. I was foreign, but without the implicit notion of not belonging, being the Other, in that particular space. On my flight back home after that semester, I distinctly remember that one lonely, bitter burn of tears I allowed myself in anticipation of being an outsider, once again, in my own home country.

What I didn’t know about Charlottesville then – or in fact until last weekend’s terrible news – was its tension-filled history of racism. The university itself was built with slave labour, an aspect of its history that remained untold until fairly recently on the university tours for prospective students. During the Civil Rights movement, Charlottesville was amongst the last towns to ditch the Massive Resistance, a white strategy to close down public schools in order to avoid racial integration. Theatres and restaurants remained segregated despite the attendance of African-American students at UVA. Today racism manifests in police brutality and of course last week’s white supremacist march and terror attack on counter protestors.

In light of this weekend’s horror, I’m struck by my own failure to seek out the broader historical context of a place I hold so dear. It reminds me to be actively conscious of Aotearoa’s past, including the dispossession of Māori resulting in racially unequal social outcomes. The homeless person of colour you may see on the cold winter streets of Auckland is there because of a state which refuses to acknowledge our violent colonial past.

I’m also powerfully aware of the selective nature of racism in Charlottesville. It was racism that did not affect me, a person of Asian descent, but weighed heavy on a generation already fraught with centuries of blood and grief. Should I be grateful I escaped being a target? Am I at the mercy of the ‘flavour’ of race that white supremacists choose to pick on? Do I have any agency living in a society that is majority white, whether that be the U.S. or New Zealand?

The events in Charlottesville evoked in me not only intense sadness for the lives lost, but resonance with my own wounds. We all have these wounds, whether they are based on race, sex, gender, religion, size, age or economic background. My wounds, the ones from years of ‘light-hearted’ racial remarks, sit deep in a corner of my heart. In my pain, I stand in solidarity with those affected by the terror of Charlottesville.

When I look back at my time at UVA, I still think of those same vibrant fall colours; I know I will continue to remember my time there with fondness. But now, along with those shades of red and gold, I will remember the blood and tears of those who will always belong at UVA, and in the town of Charlottesville.