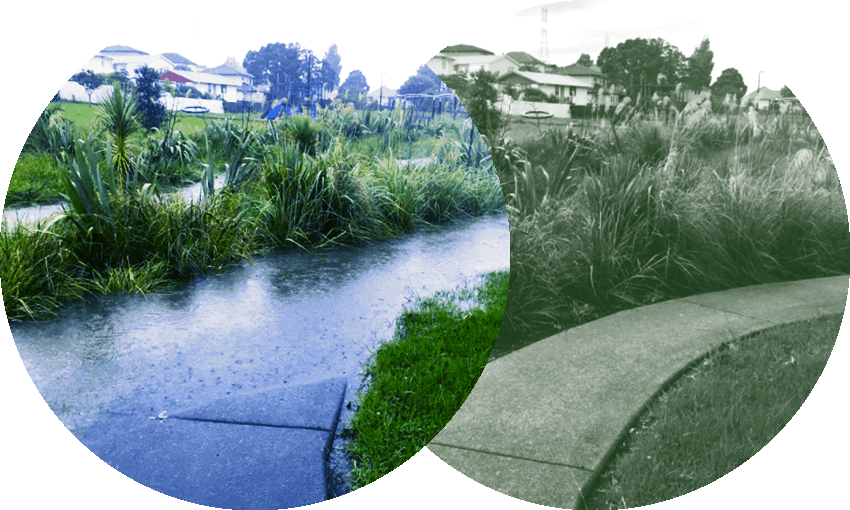 When a full-on storm event occurs in Auckland like it did on Monday morning, parks and streets will flood.

In some cases this is by design, to lessen flooding risks to buildings, particularly homes. The water should drain away slowly over a few hours, thanks to the marvellous powers of secret stormwater infrastructure. Here’s an example at the park down the road from my house.

But making these things effective stormwater infrastructure – as well as being a pretty garden, functional sports field, or on-street car parking – often costs big money. So next time you wonder why is a town centre garden so expensive to build, the answer may be because it’s not just a garden, it’s also hidden stormwater infrastructure, like this at the Auckland Botanic Gardens.

There is this at the Auckland Botanic Gardens. pic.twitter.com/8QvmrJlmQP

The more impermeable surfaces (eg concrete, other stuff water can’t soak through) we have in our neighbourhood, the more stormwater infrastructure will be needed. There’s already quite a lot there you probably never notice.

Berms are secret stormwater infrastructure. Roads are one of the biggest contributors to what’s called “run-off”: rain that falls on something impermeable which can’t soak it up, like a road, driveway or roof.  It has to run off to somewhere else to be soaked into the ground or delivered to the sea, usually somewhere downhill from where it started, sometimes a grass berm.

When a berm is concreted over or people have parked on it so much the soil has been compacted by the weight, the water that falls on it further adds to the run-off. That’s just one example, but it’s a big one. Although berms are small there are a lot of them, forming  a substantial part of the bigger network of stormwater infrastructure.

Underneath the ground there are also pipes that take this water to rivers and the sea. Many run underneath roads and parks in particular. Roadworks and park projects are often secret stormwater infrastructure projects in disguise.

Some small parks are “stormwater reserves”. They are land deliberately set aside, usually downhill from housing, for water to collect in during heavy rain before it is able to soak into the ground, move through the pipes, or flow into a nearby river or harbour. To you it might be a place to walk the dog, but it’s also quietly undertaking its invisible function while you go about your day.

In the area I represent, Puketāpapa, we often find when we go to do work on parks set up a long time ago that corners were cut on stormwater infrastructure. This can mean renewal projects that should just be a “like for like” job require a lot more investment.

For example, in Fearon Park there was a lot of flooding, some of which impacted on nearby houses. Stage one of the project to renew the park and connect it to Harold Long Reserve was in fact putting enormous pipes underground to deal with stormwater.

It was several years before we could put in the playground on top which most people would think was the full purpose of the works. These spends come with opportunity costs; in this case we didn’t even put upgraded sports field lights in the concept plan because we knew the essential stormwater work would eat so much of the budget and we didn’t want to set false expectations for the community. Local government is all about these trade offs and decisions. Ultimately reducing flooding for homes outweighed sports field lights.

If you want to see a project that was all about stormwater and managed to deliver a whole lot of other benefits for the local community, check out Te Auaunga, in the Wesley area. It has reduced flooding for local homes, naturalised this portion of Te Auaunga Oakley Creek, and created beautiful open spaces and play areas. This is climate action and it’s also equity: taking two of the worst parks in the broader area and creating real gems.

As the climate changes, stormwater infrastructure, secret or not, becomes even more vital. We are playing catch-up on decades of underinvestment, currently using mechanisms like the water quality targeted rate and the Central Interceptor project.

The latter is primarily about wastewater; what goes down the toilet and kitchen sink. Costing over $1b, when completed it will radically reduce the incidents of wastewater and stormwater mixing in flooding events. If your sewer water gets into your stormwater it pollutes it and thus also pollutes the end destination of that stormwater; our rivers and harbours. So keeping stormwater flooding where you want it, away from sewer systems, matters too.

No one wants their home or workplace flooded, and everyone wants the best possible water quality. Stormwater infrastructure is what can deliver both. We should celebrate its successes and openly invest where it isn’t up to scratch.