Everybody knows writing is terrible. Hayden Donnell recommends a trick to make at least part of the process a little bit easier.

I’ve always hated writing. If war is hell, writing is purgatory: a long expanse of boredom and mental anguish, at the end of which you’re lifted into the light or, more likely, plunged further into darkness. Many writers feel the same way. Their most common explanation for continuing in their profession is that they have no other viable skills. Their second most common explanation is that while they hate writing, they love having written. I can identify with both of those reasons. What often goes unsaid is that the feeling of satisfaction I get after having written lasts about four zeptoseconds before being replaced by the gnawing dread that preludes the next deadline.

This cycle of self-loathing and temporary relief has been my reality for the majority of my journalism career. But a few years ago, I discovered a trick that helps dull the pain. I don’t remember the story I was working on. I do remember looking at some refill and thinking “I could write words in that”.

It was a life-changing epiphany. On a computer, my process is stultifyingly slow. A couple of sentences are written. This completely exhausts my mental resources, forcing me to spend several minutes checking Twitter and ruminating on the horrors of the world. Once I muster the energy to return to Google Docs, I’ll painstakingly edit the terrible words stupid past-me stupidly typed out. 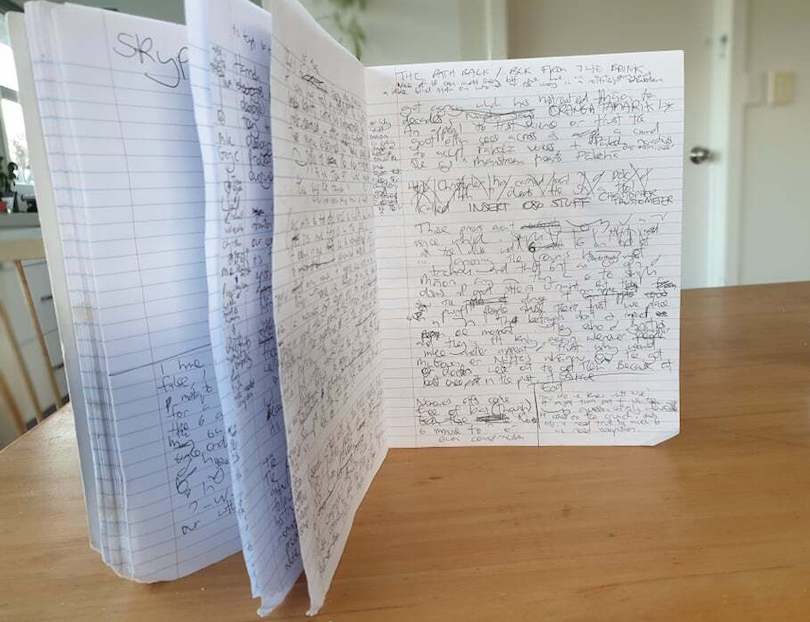 The scribblings of a man who’s trying to break the cycle of self-loathing and temporary relief (Photo: Hayden Donnell)

On paper, everything is different. I speed through a sentence, cross it out, then rewrite it. I scribble out a paragraph, decide it needs to go elsewhere in the story, then draw arrows to that position. If something needs to be added I place an asterisk on the page and write it in the margin. Most of what I produce is trash, but in an electrifying departure from my previous norms, I don’t care.

I didn’t really talk about this life hack until the journalist and movie critic Elle Hunt posted an excerpt from an interview with legendary Simpsons writer John Swartzwelder, where he said that he tries to write his first drafts quickly, almost without thinking. I posted this reply.

The reaction was swift and brutal. Tess Nichol, deputy editor of North & South, says her first thought after learning my handwriting technique was “what the fuck?”. “[I thought] this process seems deranged,” she says. “Your hand would get sore and it would take so long. It makes no sense when drafting on a computer means you have so much more ability to move around and improve on the text.”

I felt like a freak. But according to psychotherapist Paul Wilson, I’m not alone. Many writers benefit from putting something down on paper before venturing near a keyboard, he says. “I view it as an internal conflict between aspects of the self. The creative part which wants to play with and express something – which is often rough and imperfect to begin with – is at war with a perfectionistic inner critic that, given the chance, will pounce on every ‘flaw’.”

Writing by hand can help bypass that inner critic, partly because it’s innately a rough draft, Wilson says. It helps that it’s much harder to edit on the page than on Google Docs, as the ease of editing on a computer allows a writer’s inner critic to assert itself, and strangle their more easygoing creative self, he says. “All creativity is a battle between self-expression (pride) and self-doubt (shame) – the two emotions we don’t talk much about in western culture but which influence so much of our social lives,” Wilson says.

In short, for people like me, writing by hand is a way of tricking our brains into ignoring the self-loathing that taunts us at every turn. That might not be for everyone, but few writers are able to reliably tap into a reservoir of unhindered creativity without a little help. Nichol, who hates the idea of putting pen to paper, says her writing trick is to “procrastinate for so long my brain half shuts down from anxiety, and then let the words flow”.

Lapsing into a stress-induced fugue state is an alternate method to consider. If that doesn’t appeal though, I’d suggest heading to Paper Plus, wandering past the Top 20 novels to the school supplies shelf, and picking up a trusty red 1B5 Warwick exercise book. Writing drafts out in that book may be less efficient when you’re grappling with a tight deadline, or writing a shorter article like this one, which, in a slice of bitter irony, I wrote entirely on a computer. It doesn’t entirely stop writing being hard or time-consuming. But if you’re facing a blank page, and the thought of filling it makes you shiver with dread, writing by hand does make one part of the process a bit more manageable.