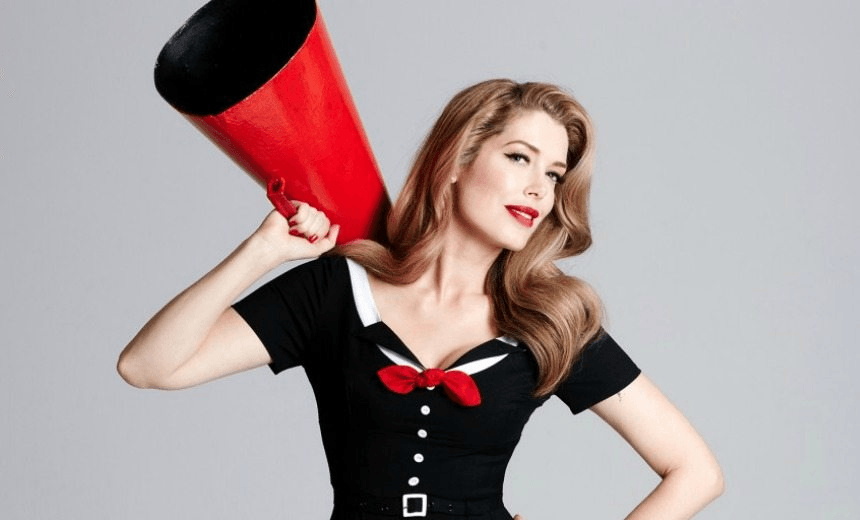 Alex Casey interviews Tara Moss, author of Speaking Out, on why women still need to fight to have their voices heard.

Tara Moss is an activist, author, journalist and very cool legend. I devoured her latest book Speaking Out from cover to cover, desperately trying to absorb all of her scorching takes on where women’s voices are at in society. Moss weaves together statistics, personal experiences and familiar cultural narratives, and tells women exactly what they should do to make themselves more present in conversations at every level.

It sounds very corny, but after finishing Speaking Out on the bus I thanked the driver with the clearest, most confident delivery I have ever mustered. Ahead of her appearance in the WORD Christchurch festival, I interviewed Tara Moss about why women still need to fight so hard to have their stories told.

First of all I just want to thank you for writing Speaking Out. I really, really hate speaking and after reading it, something shifted in me and now I can hold myself together sort of. Why did you feel like, despite how far women have come, that there was still a need to write this book?

I’m pleased the book had a positive effect on you. My intention with Speaking Out is to encourage more people to speak out and support others to speak out – particularly women and girls. Statistics have shown that we have been massively underrepresented in public debate and positions of power and influence, along with other groups who have been marginalised due to race, disability, sexual orientation and more.

I wanted to outline the issues, argue for more diversity and offer tools and solutions for how to make that happen. I wouldn’t have the need to write such a book if the data did not show a consistent, long-standing problem in this area.

Sometimes this more subtle form of oppression, such as the unequal ratio of voices heard, can be difficult to explain to due to unconscious bias. How can we break it down plainly to communicate why it’s a problem?

I believe a combination of hard facts and data, and personal examples, can make a strong impact in helping people to understand issues they may not be personally faced with. A lot of men speak to me about how important the issue of gender equality and ending violence against women is now that they have daughters.

Most men have some women or girls in their lives, and listening to the experiences those loved ones are having can help them to understand, and in some case compel them to become advocates for positive change. Breaking the issues down plainly is something I do in Speaking Out, and also in The Fictional Woman. Some issues, even explained plainly, take some time to understand.

Unconscious bias can be complex, so I have included the results of studies on unconscious bias in my work, as well as providing anecdotal examples. I also explain that both men and women have a degree of unconscious bias against women in particular areas, like in leadership.

It took 109 years to have a female Prime Minister in Australia. There has literally never been a female president in the US. We don’t tell and re-tell stories about great, wise women and women leaders in our fiction, but rather, re-tell classic stories and fairy tales of damsels in distress and evil witches. It is going to take some time to normalise the image of the female leader. It won’t happen overnight.

There’s a lot of discussion at the moment around switching off comments and putting systems in place to make women safer online. How do you deal with backlash personally, do you have any tips?

I enjoy social media and online spaces, and find those spaces help me research, find like-minded people, amplify my voice and help me to share important information and reports. In light of the fact that there are a vocal minority of people using those spaces to threaten or harass people like myself, I find the only way to continue to use and enjoy those spaces is to block and ban, and to report any abuse or threats.

This can sometimes be time consuming, though some social media platforms have improved their reporting processes in recent months. I report abuse to social media platforms almost daily, but it only takes me a few minutes now. Anything very serious will be reported to the police, which is much more rare for me, thankfully.

Unfortunately, the comments sections on news sites have really devolved into cesspools of abuse. This has become a strange culture online, and as a result and I very rarely read below the line anymore, except on my own blogs, which are generally pretty pleasant places with respectful comments (knock on wood).

I totally understand and support the recent movement by serious news sites to remove comments sections. They don’t contribute to the reporting and in reality those publications can’t afford to moderate the level of abuse that people now type into the comments.

The tsunami of abuse is not exactly divided up equally. The Guardian recently commissioned research into 70 million comments left on it’s new sites and found that of the 10 most abused writers, 8 were women. The 2 men were black. Two of the women and one of the men were gay. Sexism, racism and homophobia are alive and well online.

Social media and the internet has obviously played a big part in empowering women, but how concerned are you with the simultaneously damaging elements like pornography, trolls and thinspo sites etc?

A UN Women report from 2015 found that globally, women were 27x more likely to be seriously abused online, but the same report found that 85% of women felt the internet gave them more freedom. Freedom and democracy matter online and in the physical world, and the two can’t be separated now that so many people’s professional and social lives are entwined with online services and spaces.

Is it frustrating that people still pigeonhole you as “beauty AND brains”, or has your own public image shifted since you were able to take more control of it?

My public image has shifted over the decades, thankfully. Social media and blogging, as well as traditional writing, has been a big part of that. I still get the ‘beauty and brains’ nonsense. I mean, what do they think is in other people’s heads? Air? Seriously? Everyone has a brain, even if their job doesn’t involve writing books.

You seem to be quite a big fan of vintage and traditionally feminine iconography, how do you negotiate worlds like beauty and fashion that are traditionally structured around making women feel like garbage?

The vintage scene is remarkably progressive and rebellious once you scratch below the surface. This is one of my areas of academic research, as well as a personal interest. I believe the demonization of the ‘feminine’ as vain, fluffy or unnecessary has been a problem, and has further established the ‘masculine’ position as normative.

I am not a particular fan of the fashion industry, but I am a fan of vintage and sustainable fashion, and self-expression regardless of gender. I would like to see people less constrained by fashion trends and conservative ideas of what is proper, or appropriate for each gender. Embrace what works for you. My red lips stand out to some because it is not the norm these days, but it is my ‘red steel’ and works for me. Equally, I like women in short haircuts and jeans, or men in eyeliner and silks. I find all self-expression fascinating.

After being in the public sphere for over 20 years, what shifts have you seen towards a more equal society?

The move towards greater gender equality seems to come in ebbs and flows, with a push and then pushback. We are in a time of change again now, in my view. Women’s participation has risen enormously in many fields, though there is still a long way to go. Worldwide, fewer than 1 in 4 people we hear from or about in the media is female, but that was just 17% in 1995.

I wish it wasn’t just 24% now, instead of 50% but progress is there, and progress is still needed. The gender pay gap has stalled in recent years, however, and violence against women is still alarmingly high. There are many ways to mark progress, and many ways to measure what still needs improvement.

If there was one thing you could say to a woman right now, who has something on her mind that she would like to say or write or scream something but feels like she can’t, what would it be?

You have the right to speak and be heard. You have just as much right as the next man – not more and not less. Know it in your bones.

Tara Moss is appearing in the WORD Christchurch festival, click here for more information on the event