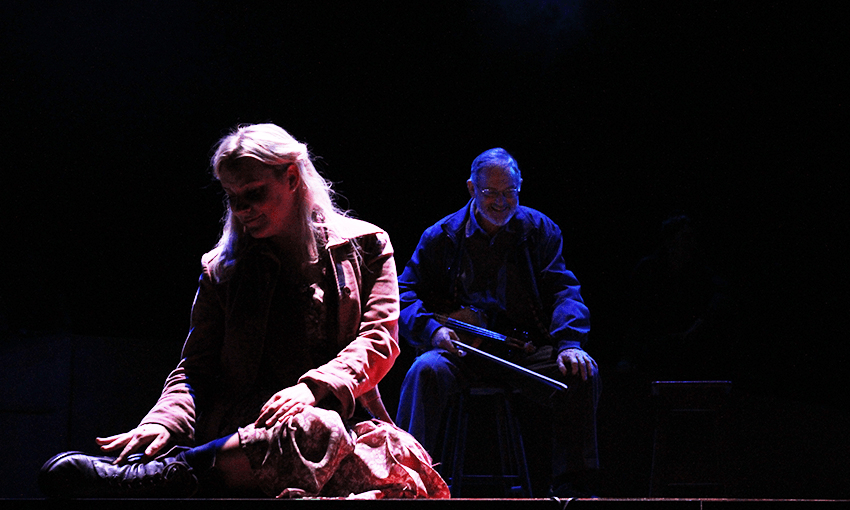 Once, based on the 2007 film, premieres in Auckland tonight. Photo: Jake Munford.

Once: A cult movie musical comes to the Auckland stage

Once, based on the 2007 film, premieres in Auckland tonight. Photo: Jake Munford.

A new production of Once, the musical based on the hit film, opens in Auckland tonight. Sam Brooks talks to the director Jesse Peach about putting the New Zealand premiere on its feet.

Being a musical theatre fan in New Zealand can be a testing experience. If you’re a die-hard fan, you’re likely to have already heard the soundtrack album a few hundred times front-to-back, back-to-front before you’re in a seat watching the real thing. More often than not, you need to pay an airfare and an exorbitant ticket price even to get there.

So when someone is putting on a professional production of a fairly new Broadway show (seven years is basically a few months in theatre time), it’s worth celebrating.

The musical, based on the 2007 film that made your coolest friends cry, follows a Dublin busker and a Czech woman who fall in and out of love. It is tragic, beautiful and full of folk music. The stage musical comes with the expected pedigree – eight Tonys, a Grammy – and (again, having only heard the cast album) translates the aching melancholy of the film to the stage without losing any of its intimacy.

Peach Theatre Company, a mainstay of Auckland theatre throughout the late aughts and early teens, brings Once to New Zealand, courtesy of director Jesse Peach. He’d been chasing the rights since the musical’s premiere seven years ago. “It’s the most beautiful show I’ve seen – and I’ve seen thousands,” he says. “It’s perfect: simple, profound, and stirring. The live music element with the actors playing adds a whole new dimension. It’s so touching.”

That’s one of the things that makes Once special. The cast also serves as the orchestra/band (depending on how fancy you are), and while that might be an inevitability for any musical on a smaller stage like say, The Basement, in a big venue like the ASB Waterfront Theatre, I can imagine it’ll give the show a greater intimacy.

Theatre rights are a difficult beast. Some shows allow a new team a lot of freedom, while others are frustratingly stringent, down to needing approval over casting and design before even giving the go ahead to put on the show. So how does a director balance his own creativity and vision with staying true to the original?

“It’s a combination of staying true to the script and the intention of the work,” Peach says, “and using your actors to best find that. They’re all different, so every show has a different heartbeat. I don’t really care about having my own stamp on it – it’s a collaboration.”

We’re lucky with the pro-am (professional-amateur) scene in our country. Despite its myriad issues and the blurred line between what is considered professional and amateur, their shows often represent the best opportunity to see your favourite musical in New Zealand, albeit with necessarily reduced production values. Still, some of the best triple-threats (singers/dancers/actors) in our country can be seen on these stages.

But Once doesn’t just require the cast to sing and dance, they need to be able to play a musical instrument too – and at a high level. “I didn’t anticipate how challenging it would be to cast,” says Peach. “It’s hard to find performers here who can act, sing and play an instrument to an exceptional level. That process took a whole year.”

Despite the difficulties, Peach ended up with a cast of ten professional musicians, headed up by acclaimed singer-songwriter Lisa Crawley (playing ‘Girl’) and Adam Ogle (playing ‘Guy’). Both are fairly fresh to New Zealand theatre; Once is neither performer’s stage debut, but definitely the biggest production they’ve acted in at this scale.

Freshness can be underrated in musical theatre. When you see those annual touring shows at big venues like The Civic or the St. James, it often feels like the casts are not so much acting and singing as putting words and movements the right order in time with the music. When I saw a touring production of Chicago (which premiered 22 years ago), the actress playing Velma had performed the role 2,700 times. That is entirely too much jazz!

That staidness isn’t just present in the casts of these touring shows. By the time they get here, the songs have been played on repeat by their superfans a hundred times, and the tricks that those Broadway shows pioneered (hello, The Lion King antelope scene) have become dusty and dated. Even worse, there’s the whole rigmarole around replicating the original production – the staging, the choreography, the design – that makes it like watching a talented artist trace over someone’s original work. Competent, often impressive, but also closer to literal re-creation than real artistry.

But when professional musical theatre in New Zealand gets it right, using our artists and their honest-to-Sondheim talents, it really gets it right. I think of an experience like Auckland Theatre Company’s reimagined, in-the-round, staging of Chicago back in 2013. Directed by Michael Hurst, it was an explosion of unsubtle, tawdry imagery that injected the musical with some much-needed electricity and life, and managed to displace the now-ingrained imagery of the 2002 film. It was gritty and grotty, giving weight to the musical’s prescient themes of fame, crime and media exploitation.

These are musicals that you can’t see on the pro-am circuit. They need to be professionally done, but it can be difficult for audiences to tell the difference. Even ticket prices can be pretty much the same, says Peach. “I’ll only produce professional theatre, which means everyone’s being paid fairly. No exceptions. However, that’s risky. I know this from experience but I fiercely believe in paying artists and generating industry, so I’m willing to take the risk. It’s worth it.”

If you’re a musical fan, the chance to see a professionally done musical, one that’s actually premiered in the last decade, is a chance that you rarely get. So pour a dram of whiskey, put The Corrs/The Cranberries/Damien Rice on your Spotify playlist, and get down to crying at Once.

Once runs at the ASB Waterfront Theatre from June 28 – July 14. You can buy tickets right here.</em