Sara Qasem, who lost her father Abdelfattah Qasem in the March 15 terror attacks, shares why she chose to speak up against hate in a TV documentary that screens tonight.


Losing someone is a rather hyperbolic experience. Losing someone in a terrorist attack at the age of 23, with that same person being your dad, your best friend, the noise-maker and life-bringer of the house, on a regular Friday, is a grief that goes beyond words.

On March 15, 2019, my dad, Abdelfattah Qasem, was one of the 51 martyrs who stepped foot inside the large, brown wooden doors of the Al-Noor mosque in Christchurch and never walked out. I remember odd details about that day. My mum calling a good friend of Dad’s amid the commotion. Traffic, police sirens and ambulances rocketing past. Mum’s comforting yet stern voice, “Where is Abdul? He never came home.”I t was odd. Surely she wasn’t talking about our Abdul? The noise was so deafening, yet all the same, the sinking silence within me was unnerving. Dad wasn’t coming home, but I wasn’t going to accept that, not until proved wrong.

My dad was a magnetic man. He was joyful, vibrant, intelligent, hardworking, and so very funny. He had dad jokes for days. He wasn’t only magnetic to people, but he cared deeply for animals too, a leader of the land and farmer of his very own lifestyle block. I like to link the analogy of living on the land, just like he did growing up amid the Palestinian olive groves, to us, his children. Alongside my mother, Siham, he raised us with hope. My two older sisters and myself were their seeds of love, my mama used to say, ploughed with careful intention and the hard work and sweat off my parents’ brows. 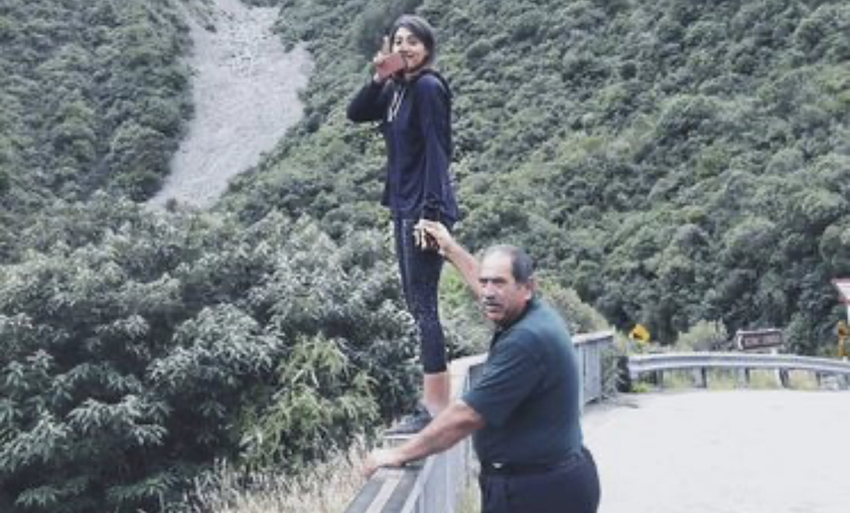 Sara and her dad. (Photo: Supplied)

The moment I realised my dad was one of the fallen, it felt as though hope was gone, like my lungs had been flattened into two large skipping stones. As I sat in silence, watching them fly across the river with the help of a wind I didn’t bargain for, I thought to myself: why? Palestinian? Middle Eastern? Brown? Muslim? In that moment, I promised myself I would never feel like an outsider again. We are not simply carbon and bad timing – we belong here, too. I heard it within me, and within the outpouring of aroha from the people of Aotearoa too: “This is your home, and you should have been safe here” (All Of This Is For You by Ruby Rose).

In the months following the attacks, the bravery of my community in extinguishing the flame of hate with peace was not a easy pill to swallow, not one glazed in sweet honey like baklava. It takes guts to tremble, and then to have the strength to soften. Poetry would say that “my people have given you earthquakes”. Just as earthquakes shake, after a period of time we slowly rebuild. I decided that I must take this life with all its love, loss and destruction, and speak without static – to rebuild. I knew there was work to be done in Aotearoa.

But it isn’t a simple thing to carry such a public grief. I’ve always been concerned about people’s ability to truly capture the essence of our lost loved ones, as well as the dangers of hate and division that still exist on this precious land. I understood very quickly that short clips, news articles and sporadic photographs could only ever amount to so much in painting a complete picture of both the good and the bad. We needed honesty and vulnerability, because change is not achievable if we don’t face our pre-existing biases. Although I have these worries, the sheer power of love continues to quell them with ease. Love is a mother tongue within this land. I carried a weight, but I saw your hands had blisters from sharing the load as we healed, educated and taught love together. I saw it in the flower wall, in the cards and touching gifts, in the phone calls and silent encounters where strangers would weep as they hugged us wherever we went. I saw it in the stranger who retouched my chalked message on the walls of the botanical gardens for over two years, still unnamed. Strangers indeed, but connected by our humanity.

It is one of the main reasons I decided to take part in Patrick Gower’s On Hate documentary, because I knew the people of Aotearoa would be willing to listen. Patrick has walked alongside many in the community from day one, and continues to do so. We need to look at what comes next, what we can learn from this, and what must be understood so that something like this never happens again.

In my short few years on this planet, I feel as though I have lived a few lifetimes. I rarely cry about anything else, because it all feels so small in comparison. I often have to remind myself that I am not alone in my struggle. Fear still sometimes sits in the corner: I still sometimes feel that if I am in a place of worship on the wrong day at the wrong time, I will come to hear the whistles of bullets in the house of God, and end up in the presence of God instead.

I’m still learning; I haven’t found the handbook on how to cope when you lose your dad and other beloved community members in your early 20s in a mosque terrorist attack in a country you originally moved to for safety. But poetry helps. It’s been my solace; the vacant space which sits between my heart and mind; a field of lavenders with each root grounded in bravery and vulnerability. Poetry helped me write this timeline as best I could:

3 months on, I was desperate to maintain the mana and identity of my father; he was not but a number. 6 months on, and I only had the nerve to tell the people the good parts, I was worried they’d leave. 1 year on, there was justice to be taken; nothing like this would ever occur again and judicial measures would have to be made. 1.5 years on, and I was confused. I watched the dust settle and always wondered who changed the world; I knew some folks do, but surely not in small towns on islands at the end of the world? 2 years on, it’s strange, because it’s 2 years on. I can tell you think I have it rough. I’m familiar with what it is like to keep a tally of all that is no longer here and all that is lost. I know what it feels like to be too tired to drive or lace my shoes, and sometimes, I still feel like a tourist trespassing on private grounds. But you, leaders of love, have opened the gates to the garden and walked with us amidst the lavender fields. I have finally forgotten the ‘i’ in terrorist; a coat so heavy in the scent of fraudery, it was never mine to wear. 2.5 years on, my mourning has melted my grief into anger, but my anger is in fact not anger, but passion, and my passion is softened with the scent of love; but forgiveness is not a tidy grave. I will leave this life so shattered that there will be a thousand slices of heaven for all of my fragments of vulnerability.

My fathers name is Abdelfattah Qasem; a husband, father, friend and hero, who left on an average Friday and didn’t come home. I don’t want to leave this life without having come home, I have a choice. So instead I will share my story and take this life with all of its love and loss, and speak without static. From that, together, we will sow seeds of hope within the land of Aotearoa, and raise a generation through bravery and love.