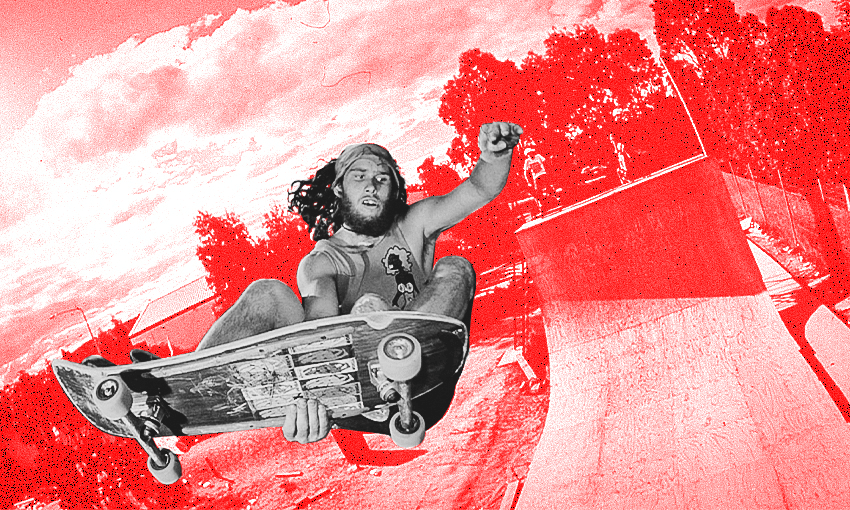 ‘Take me to the ramp’: The story of skateboarding legend Lee Ralph

More than 30 years after he tore through the global skating world, people still remember the barefoot New Zealander with the wild red beard. Where did he come from? Where did he go? Don Rowe finds out.

Lee Ralph was pissed off. Thousands of kilometres from home, the 17-year-old Māori boy from Wellington via West Auckland was sitting in a carpark waiting for skateboarding legend Mark Gonzales to stop hanging out with Prince.

The year was 1987. A decade after the longhaired, surf-crazy Dogtown Z-Boys brought skateboarding back into the mainstream, the sport had matured into a worldwide phenomenon – with the fame and cash prizes that came with it. Ralph, who only a few years earlier had been given his first skateboard from a cousin returning from Australia, knew it could all be his.

“I knew I was good. Some of my bros could take me on the field, could hit sixes and shit, but they couldn’t skateboard – and I could. I was like, ‘I’m only a few years away from being the best.’”

After moving with his mum to Lower Hutt, Ralph had fallen in with the Westie crew in Newlands, led by Gregor Rankine – an underground legend who was one of few locals to keep skating when the sport fell out of favour in the late 60s. It was an inconvenient place to learn the ropes. Constant rain and wind meant wet ramps and dangerous airs. Ralph was on the verge of giving up, had it not been for Rankine.

“Gregor, my mentor, was the hardest-core skateboarder on earth. And the best. He just totally ruled. I didn’t know how much until he went to America, kicked everyone’s asses over there, then came home and told me that he kicked everyone’s asses over there. And he said, ‘You’re going to as well, you’re on the right track.’ And I was like, ‘Far out. Cool.’”

With the sport still in its infancy – particularly on the steep vert ramps that figures like Tony Hawk and the X Games would go on to popularise – style was every bit as important as substance. Under Rankine’s guidance, Ralph developed a powerful style, alongside his own, almost contradictory, straight-edge aesthetic, totally forgoing the drugs and alcohol rife in the scene. “I only think about playing guitar, and skateboarding,” he once told a TV reporter. By 1983, when Ralph was 14, he was ready for America.

“Imagine a 14-year-old kid goes and plays the All Blacks,” Ralph says. “He’s going to be killed in the first scrum, but in skateboarding he wins. He beats all the adults. If his dad enters the comp, he beats him too. It’s just insane.”

But Ralph’s parents were unwilling to send their son so far abroad. Instead, in 1986, Ralph went to Australia, continuing his training with Rankine and, in his words, “slaying everybody to absolute death”.

One day, after sleeping out a rainstorm sheltered inside a car the pair had broken into, Rankine and Ralph entered a local competition. They agreed to split the prize money, regardless of who won, and figured they had a pretty good shot at taking it out.

“[The Australians] were inbreds back then. Total inbreds, so redneck you wouldn’t even believe it. The tricks they thought were cool were so stupid. That’s why they weren’t getting any better – their whole attitude towards skating was wrong.”

Ralph won the competition, and by ‘87 he had made the journey to the United States. After only a few competitions he signed a deal with skate brand Vision, producing his own board, and was a regular fixture in all the skate magazines. Tony Hawk, who would go on to make millions in clothing deals, skateboard sales and his own video games, rubbed shoulders frequently with Ralph, and would later describe him as “a barefoot caveman”.

It seemed to everyone paying attention that Ralph simply couldn’t lose. In the US especially, Ralph’s wild red beard and aggressive, powerful skating set him apart – and made him a legend overnight.

“Everything was so good. My whole life had been aiming at this moment, and it was on. Nothing could stop it, failing an injury, but I don’t get injured so that wasn’t going to happen either.”

And then he went to France. At the time, skateboarding was strictly an amateur sport. Professionals needed green cards, and Ralph didn’t have one. After returning from a photoshoot in Paris, Ralph was stopped at the airport, seized by the United States government and put on a plane. He went to Germany and wouldn’t return to the US for a full decade. Disillusioned, Ralph picked up the paintbrush – and the bottle.

“That’s all you can do. Deny the depression. You don’t have any other… I didn’t think I had other options. I was too stupid.”

In the words of skateboard distributor Radar, Ralph took to partying “like a bull to red”. Having reached the pinnacle of the sport only to have it all taken away inside of two years by a bureaucratic technicality, Ralph was drowning his sorrows. He returned to his whānau in New Zealand, and began a gradual drift away from the sport and out of the spotlight, remembered only by the hardcores as one of skateboarding’s great what-if stories.

But his love for boardriding endured, and, as street skating began to overtake vert skating in mainstream popularity, Ralph moved on to surfing. Unlike skating, he says, surfing has more of a spiritual component, and soon he had added carving to his repertoire of obsessions. That move, says Ralph, saved his life.

Now in his 50s, Ralph lives on a farm in Taranaki. When he’s not surfing or carving, he’s feeding calves, riding quad bikes and accidentally electrocuting himself on the property’s fences. He’s not a rich man, but in hardcore skateboarding circles, everyone knows the name Lee Ralph. And three decades later, that’s enough.