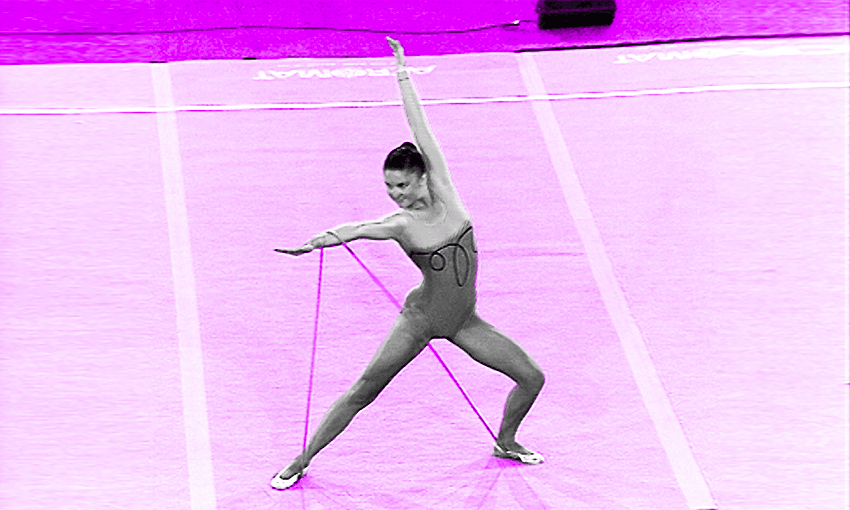 New Zealand rhythmic gymnast Angela Walker’s sporting career ended with her winning a gold medal at the 1990 Commonwealth Games. It was the culmination of a dream that started 14 years earlier.

I remember the day I set my heart on going to the Olympics. I was a little kid watching the 1976 Games on TV. I’d been out on the lawn turning flips, impersonating Nadia Comăneci. I wandered inside as the gun popped for the men’s 1500m final. A figure in black surged into the lead with strong, hungry strides. I marvelled as John Walker crossed the finish line in first place, his arms swinging up into a ‘V’.  That was the moment I decided I could do it too.

The road to the Olympics is always paved with hurdles. For the New Zealand athletes in 1980, it was the boycott of the games. Four years later, mine came in the form of the New Zealand Olympic selectors, who have a strict policy of only selecting athletes considered likely to be finalists. Even though I’d qualified to the international standard, I missed out on the team for the 1984  Olympic Games.

The year before the 1988 Olympics, I headed to Moscow to train in the world’s top gymnastics nation. That was an eye-opener. We trained harder than I’d ever thought possible. Every morning when I climbed out of bed, a different part of my body ached. Just walking into training was a challenge. I was surrounded by dozens of gymnasts who were as good as or better than me, yet most would never get to the Olympics, such was the depth of talent in the Soviet Union.

These gymnasts may have been among the world’s best, but they didn’t love training like I did. One day a gymnast came up to me and asked, “Why are you smiling?” She genuinely wanted to discover how she could find joy in a sport she’d been forced to do full-time for over a decade. That’s when I realised it didn’t matter if I never became an Olympic champion. Unlike my Eastern Bloc counterparts, I wasn’t a product of a system where Olympic glory was more important than having a childhood, or your health and wellbeing, or going to school. Seeing the misery of the Russian gymnasts training full time, I felt at peace with my lower world ranking. At least I was happy and healthy, and doing gymnastics was entirely my choice.

While training in Russia made me realise I probably wasn’t destined to win at the Olympics, I still desperately wanted to go. When the 1988 Olympic team was announced on the radio, I was on an Air New Zealand flight on my way to a gymnastics competition in Tokyo. It was excruciating being up in the air unable to hear the news. Unexpectedly, a flight attendant tapped me on the shoulder. “Would you like to follow me,” she said, motioning towards the front of the plane. “The pilot has a message for you.”

I stood up, my heart starting to race. I followed her down the narrow aisle, up the stairway and into the cockpit. She introduced me to the pilots. After a pause that felt like forever, they handed me a piece of paper that said: “Angela Walker is the only gymnast to be selected for the New Zealand Olympic team.” I wanted to jump and whoop, but I was in a 747 cockpit, high above the Pacific Ocean. After 12 years of dreaming about it, I was finally going to the Olympics.

It’s never been the done thing for a high-performance athlete to admit their goal was simply to go to the Olympics. But from a New Zealand context, competing on the gymnastics world stage remains a massive challenge – to the extent that no other Kiwi rhythmic gymnast has made it to an Olympics since I went in 1988. The experience in 1988 fulfilled my wildest dreams. I even met my original inspiration, Sir John Walker. Although unlike my hero, I didn’t win a gold medal, not even close.

My gymnastics career culminated at the 1990 Commonwealth Games in Auckland. Finally, this was an international competition I could excel in. There was more of a level playing field among competitors from countries like Canada and Australia, who like me had trained intensively alongside school and work commitments.

I knew I was absolutely capable of winning a bronze or silver medal at the Commonwealth Games. However, the top-ranked Canadian was in the world’s top ten. It would take something extraordinary to beat her, but that didn’t stop me daring to imagine myself standing atop the dais with a gold medal around my neck.

Incredibly, that’s what happened – not just a gold medal, but three bronzes too. Watching the New Zealand flag rise while the national anthem played was an overwhelming experience, especially at home with my friends and family sharing the moment in the stands nearby. What made it extra special was knowing I’d done it all on my terms, with neither my love of gymnastics nor my wellbeing having been compromised. That’s not something all gymnastics champions can say, sadly, and it makes me incredibly grateful for the enlightened approach of my coaches Emmy Bellwood and Marion Duncan.

I loved being an athlete, and I’ve loved life after sport just as much. Having spent my formative years in a gymnasium, the novelty of “normal life” compensated for any challenges of transitioning from elite sport. My gymnastics career left me with a sense of possibility, and it opened my eyes to the richness and diversity of our world.

My fingers are crossed that today’s aspiring Olympic athletes get to compete in Tokyo in 2021. In the Covid era, there may not be large crowds to cheer them on, but we’ll be cheering in front of our TVs. And some of the kids watching may set their hearts on going to the Olympics. I hope, like me, they’ll find that sport has much to offer them.