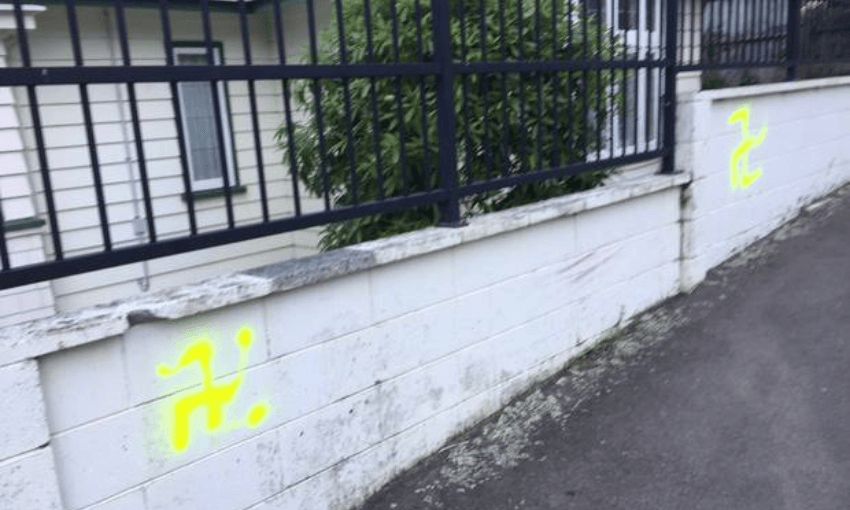 Swastikas painted on the fence outside the Wellington Jewish Progressive Congregation. (Photo / Supplied.)

Swastikas painted on the fence outside the Wellington Jewish Progressive Congregation. (Photo / Supplied.)

Good morning, and welcome to The Bulletin. In today’s edition: Two disturbing stories around extremism, a significant milestone reached at Ihumātao, and gang tensions flare in the Hawke’s Bay.

In the space of a day, two disturbing stories emerged about the presence of extremists within the community. The first was around charges against a soldier who holds extreme far-right political beliefs. Newsroom’s Marc Daalder reports he has been charged with “unauthorised disclosure of information” and “accessing a computer system for a dishonest purpose”. He remains under NZDF supervision. The Foundation Against Islamophobia and Racism has expressed a concern that someone with such views was in the military with ready access to guns, and speculated on whether others within the military held similar views.

Further information on the soldier’s political activities can be found in this report from Stuff. He was a self-described co-founder of the white nationalist group the ‘Dominion Movement’, which appears to have morphed into a new group called ‘Action Zealandia’. The latter was recently implicated in a vandalism attack on the National Party office used by MP Jian Yang.

The second disturbing story from yesterday is about anti-semitic grafitti being sprayed on the wall of a Jewish centre in Wellington, reported on by the NZ Herald. The vandalism has been widely condemned, and the local Jewish community is now on guard against further attacks. Temple Sinai chair Matthew Smith says community members have been targeted in the past by various groups, in particular by neo-Nazis and white supremacists.

A note of caution here – it’s definitely worth stressing that active white supremacism isn’t really the same thing as the more passive, ambient culture of white supremacism that forms an undercurrent of New Zealand society. The numbers of those who are active in these organisations are likely still small, and the groups are likely to remain highly marginal. But there’s still every reason to be aware of it, and vigilant against it. After all, even individual people with extreme and bigoted beliefs can be very dangerous.

A significant symbolic moment at Ihumātao, which indicates a resolution to the dispute is close. The Spinoff’s Leonie Hayden was there to witness the Kiingitanga flag be lowered, after being raised last year to mark the involvement of Kiingi Tuheitia in facilitating and mediating a resolution. The occupation has lasted more than three years, and SOUL say they’re relieved that a positive outcome might be achieved. An announcement on the resolution is expected to take place before Waitangi Day.

Gang tensions have flared in the Hawke’s Bay, and the police say handling them is beyond their capabilities alone, reports Stuff. The area has seen a large increase in gang numbers in the past several years, and there have been fights in recent days with shots fired. The particular piece I’ve linked to here is from local bureau chief Marty Sharpe, who has picked up the nuances of the situation being described by police – in particular the need for a connected approach involving families and social agencies.

Two stories on regional transport development to share: Newsroom’s Dileepa Fonseka reports on plans in the works to bring commuter rail to Hamilton and Tauranga, two fast-growing cities that are inevitably going to need better public transport options now and into the future. It would cost a lot, but would potentially unlock the wider Waikato and Bay of Plenty regions to boot. And the Nelson Weekly reports a decision could be made this year on whether to move State Highway 6 off the waterfront, which is a huge constraint on the wider transport network.

And two interesting stories on vaping: Newstalk ZB’s Aaron Dahmen reports advice was given by the Ministry of Health months ago to speed up the progression of vaping laws through parliament. That legislation is absolutely nowhere to be seen, with several indicated deadlines now missed. Meanwhile the NZ Herald’s Emma Russell reports on research that shows a quarter of teenagers who have tried vaping have never tried tobacco at all. That doesn’t disprove the idea that vaping can be a mechanism for people to quit more harmful tobacco smoking, but it is certainly in the interests of vaping companies to get young people hooked on their addictive product.

There are conflict of interest questions around a former Beehive staffer, reports Stuff. Barry Ebert, who spent two years as the senior ministerial advisor to Phil Twyford, remained the sole director and shareholder of a lobbying firm throughout that time. Over that time, Ebert was employed by both Ministerial Services and Parliamentary Services, and says “no government relations work was undertaken for anyone during the whole period.” He added that he would have informed both employers of conflicts of interest had they arisen. However, it’s troubling because of the history of this government having lobbyist GJ Thompson working as a temporary chief of staff for the PM, which involved Thompson having significant power over appointments and access to information.

This is a fascinating story about rural interests coming into direct competition with each other, from Radio NZ’s Tracy Neal. A dairy farmer in Marlborough is concerned that a logging operation will effectively destroy her business, through the use of a ‘paper road’ that runs through the farm. The logging company says they’re willing to spend money on dust suppression and impact mitigation, but in any case, getting trucks laden with wood in and out of difficult areas always has an impact.

Right now on The Spinoff: Kate Schuetze of Amnesty International elaborates on the Ioane Teitiota ruling could mean in the future. Will Steffen of the Australian National University calls on his country’s leaders to finally heed the science on climate change. Petra Molloy explains why she, a Palagi, chose to write a book mostly in the voice of a Samoan character. I write about the various considerations for Simon Bridges in deciding whether or not to rule out working with Winston Peters and NZ First. And David Brain writes about Davos, outlining the case for the meeting that everyone loves to hate, by someone who used to go.

For a feature today, a discussion of climate refugees and the Australian fires. Newstalk ZB host Andrew Dickens has been thinking about the topic after talking to an Australian based friend, who has an asthmathic son and so is bringing the family over from Sydney. To my mind, the piece nudges towards a disturbing idea about the concept of climate refugees that I hadn’t considered – those with means will be fine, but without the means to move could end up absolutely stranded. Here’s an excerpt:

In this week’s Listener the ANZ economist Sharon Zollner has been interviewed. She’s been thinking about how the fires will affect trade and migration between New Zealand and Australia over time. She believes the fires are good for our trade as the Australians will have to import more food as the droughts and fires continue.

As to migration, she points out the number of New Zealand passport holders in Australia is huge and under CER Australians have the right to move here.

We’re used to flow of New Zealanders westward to the former lucky country, but if it reverses then the impact on us will be huge. Good and bad. We’ll take their teachers and doctors gladly, we’ll take the growth that migration provides but in return we’ll have infrastructure and housing chaos. If Sydney and Melbourne stay smoky for the rest of the year then there could be a flood of migration.

The bloody rugby season is not all that far away from starting now. Yes, it’s January, but it’s the national game, so Super Rugby fixtures will have to be rolled out to almost entirely empty stadiums for several months. Even so, here’s an interesting comment on the upcoming season (and seasons ahead) from the NZ Herald’s (paywalled) Gregor Paul, who notes that pessimism around the future of the game over the past decade has pretty much always proven to be unfounded. “2020 is a year of hope and possibility”, he concludes. And I agree – I for one hope there’s a possibility of other sports really breaking through this year.