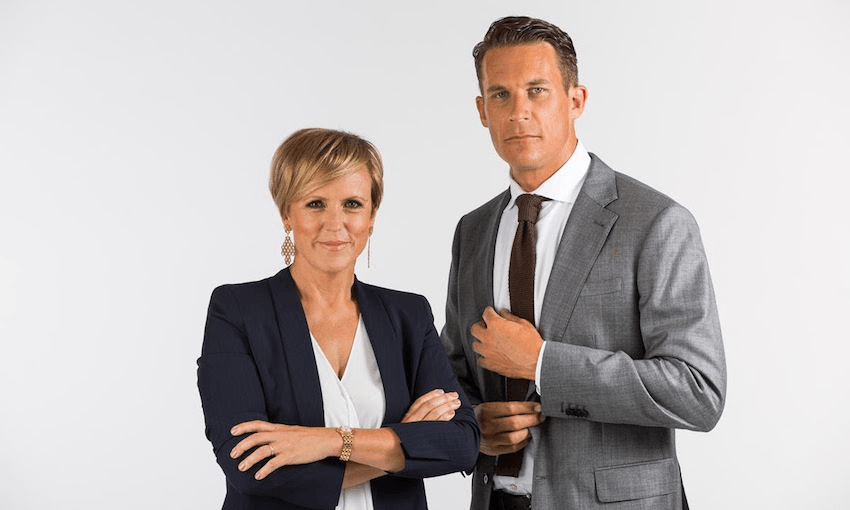 Who the hell is Jeremy Wells and what right has he to replace Mike Hosking?

The Spinoff introduces a rightly fearful nation to the Mike Hosking impersonator replacing Mike Hosking as the host of Seven Sharp.

Jeremy Wells was yesterday afternoon confirmed as co-host of the revamped Seven Sharp, as (incredibly humblebrag) first reported by The Spinoff last Friday. It’s an extremely bold hire, perhaps the boldest in TVNZ history. Largely because all evidence across his two decade-plus career suggests that Jeremy Wells’ chief ambition in broadcasting has been to break the medium across his strong tanned knee.

Emerging from the sewers of student radio, when they were the country’s best talent factory, his mainstream debut was on Havoc, playing the “inquisitive sidekick” to Mikey Havoc’s vaguely sophisticated bogan. The show messed in roughly equal measure with corny youth TV and New Zealand’s uptight self-image. Newsboy told Courtney Love that he was not a surfer but “Aquarius-Capricorn cusp”, and asked Nicky Hager what danger lefties and student radicals posed in an interview notable for each of the participants looking identical to the way they do today.

It was Eating Media Lunch which really showed his full strange range. The show took apart national institutions like Fair Go, Good Morning and Country Calendar, punctured celebrities, posited a hybrid NZ history-porno, told many outright lies, aired the word ‘felching’ on a state-owned broadcaster and generally felt like it was constantly about to burn to the ground in a monstrous scandal.

Later shows continued in that tonal tradition, without ever being quite so freaky, before he appeared to retreat into a kind of comfortable middle age as the face of a long-running Meridian Energy campaign, with little else visible to show for his working life aside from a deep tan.

For a minute it felt like that might have been the end of Wells as the most dangerous man in broadcasting, until he roared back on a then-moribund Hauraki, reviving it via as part of a dirty and scandalising breakfast show. It was notable for a sharp uptick in BSA complaints, culminating in a quite bad one involving cricketer Ben Stokes’ mum, who was not informed she was on air, and which was rightly upheld.

“I would like to apologize for consuming a cap of magic mushrooms during the opening overs of the broadcast,” he wrote. “A move which was visually rewarding for me personally but in retrospect irresponsible.”

It was only tangentially useful as cricket commentary, but became wildly popular, as did ‘Like Mike’ his savage satire of Mike Hosking, a series effective due to both the quality of the impression and the plausibility of the extremist views expressed.

Now, in what is, even by current and global media standards a deeply bizarre turn of events, he is replacing Hosking as co-host of Seven Sharp. Which is, it needs noting, is not some late night freak show, but the single most important show in TVNZ’s arsenal – the slot Paul Holmes made his own and the centrepiece of the most lucrative single media audience still standing in this country.

Jeremy Wells is now going to be live on television in front of the old, conservative, rich and huge TVNZ1 7pm crowd. And while I’ve recapped his backstory, it’s worth watching and listening to the kind of stuff he gets up to, in this handy compilation assembled by our ace broadcast intern Alice Webb-Liddall:

It’s… I mean it’s incredible. I am truly not sure that TVNZ CEO Kevin Kenrick knows what he’s signed up for. I’m equally sure that Jeremy Wells did not spend 20 years being his fucked up self just to become a smooth autocue reader. He has been hired to be Jeremy Wells, and has never once – apart from maybe the Meridian ads – been anyone else.

His new rivals at Three will be ecstatic. They have their own edgy youth show in opposition in The Project. Yet at its most troublesome it wouldn’t touch Wells at his most well-behaved on Hauraki or the ACC. So if there is a mass horrified exodus, they’re right there waiting, with an established product.

And yet TVNZ have shown extraordinary bravery, and may well be rewarded for it. There is a very genuine chance that this new Seven Sharp, combining Wells’ charismatic weirdness with the limitless relatability and charm of Hilary Barry, will be a show like we’ve never seen – one which spews out viral moments every evening, while also staying just the right side of the BSA line.

It’s perhaps the most daring experiment in our broadcasting history, containing the possibility of triumph with very real and present threat of disaster. It is not a generational shift as profound as the election of our first millennial prime minister, but it’s still pretty astounding. There is almost no outcome which would qualify as a surprise at this point, next to what has already happened.