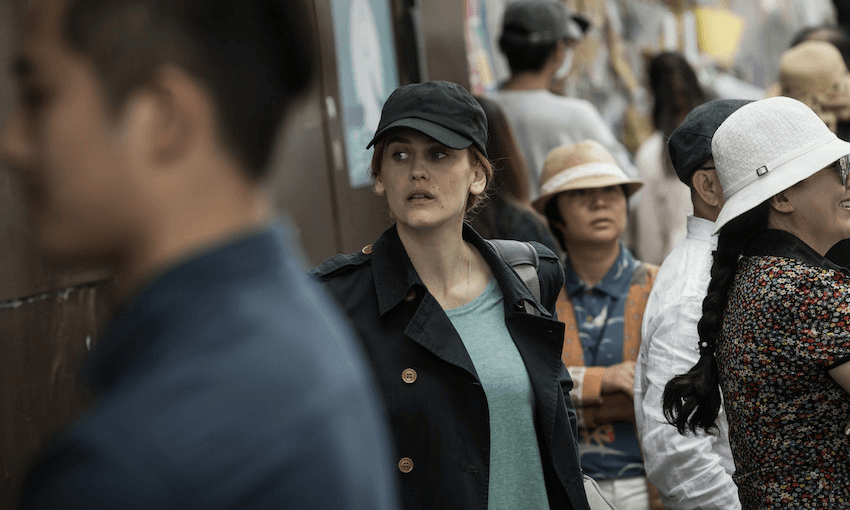 Runaway Millionaires is this week’s TVNZ1 Sunday Theatre film, focussing on the real-life story of a couple who had ten million deposited into their bank accounts.

Review: Runaway Millionaires reveals the story behind the crime that gripped a nation

Runaway Millionaires is this week’s TVNZ1 Sunday Theatre film, focussing on the real-life story of a couple who had ten million deposited into their bank accounts.

Sunday Theatre’s new drama Runaway Millionaires tells the story of Kara Hurring, the Rotorua woman who in 2009 fled the country with $10 million which simply landed in her lap. Tara Ward reviews.

What would you do if one day you discovered ten million bucks randomly sitting in your bank account? Would you come clean, or take the money and run?

That’s the dilemma faced by New Zealand couple Kara Hurring and Leo Gao, who in 2009 discovered Westpac had mistakenly put a cool $10 million into their bank account, instead of an agreed $100,000 overdraft. Hurring and Geo took the money and ran all the way to China, and their disappearance captivated the nation. We were in the midst of a recession, and when had a bank ever done us a favour? It’s in their account, so it’s their money, right?

Kara dreams of a bigger, brighter future in New Zealand, but Leo has grander plans, and unbeknownst to Kara, siphons the money to a series of offshore bank accounts. When Kara unexpectedly arrives home one day to find Leo’s bags packed and a taxi waiting, she’s thrown into a world of uncertainty and chaos.

It’s a fascinating story, and Runaway Millionaires is another solid New Zealand drama from the Sunday Theatre bag of tricks. Its strength lies in the fact we’re not completely familiar with all the details of the story, and discovering it from Kara’s perspective works well. She takes us on the run with her, and we experience every bewildering twist and turn as she does. While the use of Kara’s voiceover to explain the story sometimes feels unnecessary, it’s a well-paced, intriguing journey.

One minute Kara’s filling up the petrol station pie warmer, the next she’s living a life of luxury in a Macau five star hotel.  Kara adores her new opulent lifestyle (“I was rich, untouchable,” she says) but it’s not long before she realises Leo’s up to his neck in dodgy deals. The money disappears, and Kara discovers Leo has implicated her in his financial paper trail and that she’s wanted by the New Zealand police. The hotel penthouse is replaced by grotty studios in mainland China, as Kara, Leo and Lina go on the run to avoid being caught.

Back in New Zealand, Kara’s disappearance starts to affect her whānau, including mother Sue (Roz Turnbull) and sister Aroha (an underused Bree Peters). There’s also an insight into the police efforts to find and bring Kara home, and an unlikely friendship with Detective Inspector Mark Loper (played with calm precision by Joel Tobeck). Loper waits patiently as Kara’s world unravels, until she’s forced to make a final choice. Should she continue to live on the run, or return home to face the music?

Becoming an instant millionaire sounds like a dream come true, but Runaway Millionaires shows what a nightmare it was for Kara. It doesn’t shy away from Kara being complicit in the crimes, with Kara admitting she knew she was doing the wrong thing. But what the show does well is make us feel empathy towards Kara, without asking us to feel sorry for her. She’s often shown as being backed into a corner for reasons beyond her control, and it’s hard not to admire her resourcefulness when the money-laundered chips are down.

We’re also never in doubt why Kara stole the money and fled the country. “This money will change everything,” Kara says, who at the heart of it all, just wanted a better life for herself and her daughter. It’s a motivation every viewer will understand, no matter how strong their morals, and it’s what separates Runaway Millionaires from other recent ‘real story’ dramas. Kara isn’t a sports hero or a famous public figure, just an ordinary New Zealander who took a risk on the millions of bucks that “plonked” into her lap.  She could be any of us, and that’s what makes Runaway Millionaires worth the time.

Runaway Millionaires is the second of four tele-features in this year’s Sunday Theatre showcase, and feels a richer offering than last week’s A War Story. There’s been a decent amount of  ‘true local story’ TV lately, so it’s refreshing to watch a Kiwi story unfold that isn’t as well known as Jonah or the upcoming Rugby World Cup feature By the Balls. Runaway Millionaires is a strong drama that brings fresh truth to a legendary tale, and leaves the viewer feeling more certain about how to answer an age old imponderable: what would you do?