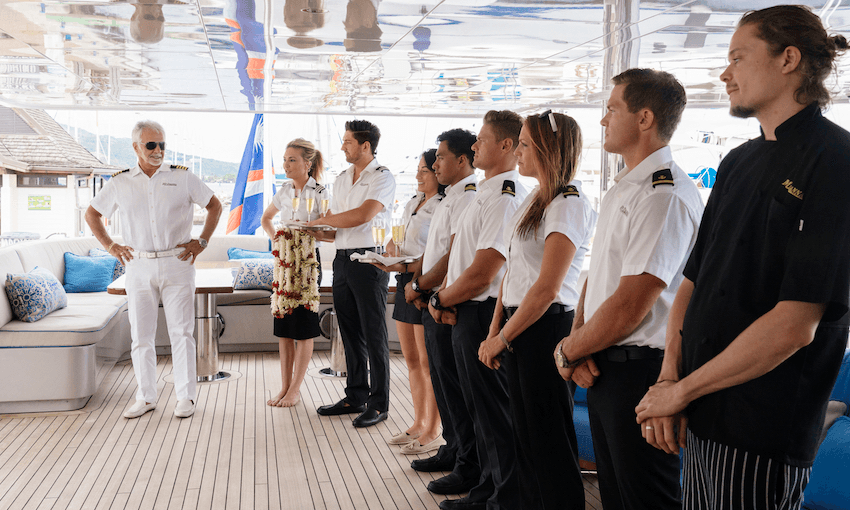 Five reasons you should be watching Below Deck right now

Six seasons in, Below Deck remains the wildest drama on the high seas. Now’s the perfect time to catch up on this hugely entertaining boat-based reality series, argues Dominic Corry.

Vanderpump Rules and the various Real Housewives shows may dominate the Bravo brand, but a world away from those land-based shenanigans, there’s another Bravo reality franchise making waves. Literally. Sorry.

Below Deck, and its spin-off sister show, Below Deck Mediterranean, centre around the day-to-day lives of the people who work on luxury super yachts catering to the super rich. These well-to-do (but often poorly behaved) clients charter the super yacht for three days, during which time their every desire is fulfilled by the four-person deck crew, the three-person stew staff and the chef.

The show chronicles the stresses upon the crew during charter, and also emphasises how much they like to cut loose when each charter finishes. Personal lives inevitably became messily intertangled.

Aside from Captain Lee Rosbach, the so-called Stud of the Sea, and Chief Stewardess Kate Chastain, a master of deathly silent passive aggression, the cast mostly revolves year-to-year, with some crew members sticking around for a couple of seasons, especially the chef. There’s almost always at least one useless deckhand or stew who gets fired in the reality TV equivalent of receiving a dishonourable discharge from the Navy.

While the previous five seasons were Caribbean-set, the latest season of Below Deck, currently screening on Bravo New Zealand, takes place in Tahiti. It’s absolutely the best season of the show yet and its superlative entertainment value is such that I am compelled to sing its praises in an effort to get you, readers, to watch it. So, here are five reasons you should be watching Below Deck right now.

They’re on a boat!

It’s delightful. No massaging of drama is required. It all flows naturally. A big part of the stewards’ lives is doing laundry. Somehow, Below Deck turns people doing laundry on a boat into captivating television. I’m serious.

Going to work on the super yachts is a rite of passage for many young New Zealanders. Most of us know at least one person who’s done it. Even if we don’t, as a boat-heavy nation, pretty much every New Zealander has set foot on a boat and been told to take their shoes off at least once. And probably been yelled at by the captain.

So Kiwis generally have a degree of familiarity with the world of Below Deck that goes slightly beyond, say, the West Hollywood nightlife scene portrayed in Vanderpump Rules. Barely half the cast is American, with the deck and stew crews always including a healthy mix of young Aussies (Hannah Ferrier, the Chief Stew on all three seasons of Below Deck Med, is one), Brits and South Africans. It’s always felt like an environment in which a New Zealander could naturally appear at any moment, an eventuality I waited five long years for…

My favourite thing about this season of Below Deck is that the show finally has a Kiwi in the cast: deckhand Ross Inia. And he’s awesome. He may well be the most authentically Kiwi presence to ever appear on an American reality TV show. Where most reality TV show cast members only ever throw fuel on drama fires, Ross does his best to de-escalate any flare-ups.

His level-headed Kiwi-ness shines through in ways that are highly entertaining, and stand in marked contrast to reality show norms. Like most New Zealanders who show up on American television, poor Ross suffered the indignity of being sub-titled in his first few episodes while viewers got used to his accent.

Yes, Inia ran into a spot of bother after this season finished filming, but please don’t let that detract from the pleasure of seeing his otherwise laid-back Kiwi competence conflict with the hysterical theatrics of his castmates. As his boss, bosun/lead deckhand/insane douchebag Chandler, flails about wildly making a absolute hash of his job, Ross quietly gets things done in a classically humble Kiwi fashion. It’s true: this season of Below Deck has both a Ross and a Chandler, and no one told them life was gonna be this way.

My favourite Ross incident might be most Kiwi moment ever captured in a reality TV show: when the whole crew are in a van heading back to the boat after a big night out celebrating the end of a charter, it is Ross who asks: “Can we go to McDonalds?”

The charter guests are hilariously awful

Below Deck used to afford the charter guests some degree of dignity in the edit, but no more – these entitled bourgeois swines rarely come off well. And these days there seems to be a lot more footage of the staff complaining about the guests, who then usually pipe up on social media once their episode goes to air, adding a metatextual layer to the drama.

Living in the States, I have seen all of the current season, and there are some real doozies coming up. The Primary Charter Guest (i.e. the one who’s paying) on the final charter of the season is possibly the most poorly-behaved guest in the show’s history. Look forward to that, it’s great television.

You might not think it going in, but food plays a notably prominent role in making Below Deck as entertaining as it is. Planning what will comprise the meals and when they happen are a constant source of conflict between the chef and the stews, and much weight is placed on whether or not the guests are happy with what they’ve been served, as the food is supposed to represent the height of luxury.

They had the same chef for the first four seasons, British cad Ben, who was replaced by the incredibly mediocre Matt in season five. The current chef, the youthful and pseudo spiritual Adrian, is something of a dick, but he’s by far the most talented chef who’s ever been on the show, and his food is shot beautifully. It’s almost like there’s a little mini episode of Top Chef inside each Below Deck.

It is for these reasons, and many more (you won’t believe how invested you get in the deckhands’ struggles with setting up an inflatable slide), that Below Deck is the best reality show on television. You should be watching it. Right now.