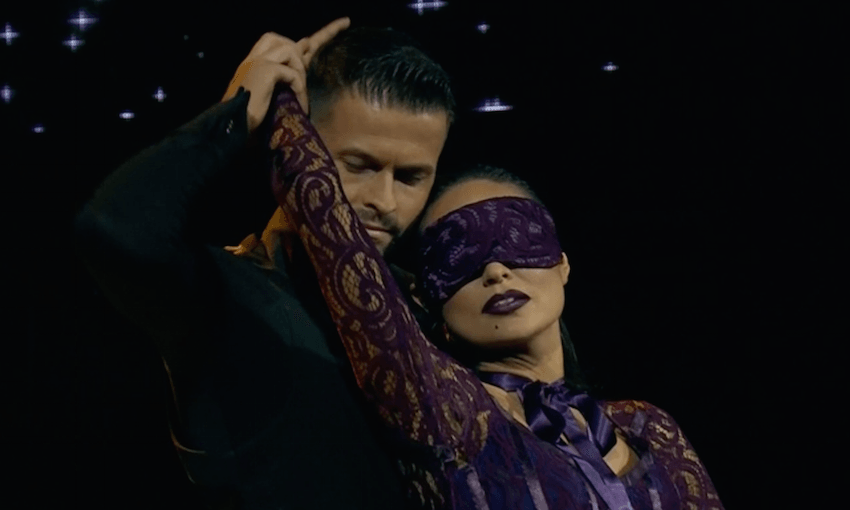 Dancing with the Stars, semi-final: Farewell, my lovely (food bag)

Everybody danced twice tonight! The theme for the first dance was ‘a tribute to a musical icon’ and with the 2019 definition of ‘iconic’ that could be extended to include the rap track my best friend recorded with his drummer friend that he sent to me, high as hell, at midnight on my birthday. Unfortunately, none of the dancers performed to that track this week. More’s the pity.

Let’s get into the rankings:

The first dance: Firstly, kudos on Nadia for incorporating a mainstay of every madcap Kiwi kitchen into her choreography – the treasured tea towel whip.

Secondly, look, even though Nadia’s partner had an exasperated blow-up at the judges for their (fairly legit) criticism, she’s just… not as good at this as the other contestants are. No amount of effort or hard work can overcome that, and that’s fine.

We all hit a ceiling with something eventually. It might not be nice, but this is a dancing competition, not an effort competition. When the judges are telling you what you can work on during the semi-final, you maybe don’t deserve to be in the final. Not everybody can win, this isn’t Drag Race All-Stars 4.

Thirdly, Blondie’s ‘Call Me’ is a banger.

The second dance: This was better, despite big Valentina Face Mask energy. It was lovely, and would’ve been a fitting mid-competition performance.

The first dance: Ah, just what Kurt Cobain’s dying wish was; to have his seminal, unintelligible rocker   ‘Smells Like Teen Spirit’ paso-doble’d on a televised celebrity dancing competition in a country on the other side of the world from where he was born.

Anyway: It happened, you guys. A lady fell over.

We’ve been sweeping and flipping and pulling ladies around on this show for eight weeks all willy-nilly, but one of those ladies eventually did fall over. And Manu still got a ten for it! So who knows what’s happening anymore. For me, someone who is not a dance judge, a ten is a perfect score, and if you push your partner hard enough (maybe what happened, nobody is paying me to go back and look at the tapes) that she falls over, then maybe you should dock a point or two.

But what do I, an unenthused amateur, know.

The second dance: Sure! Why not? Let’s do a rumba to Taylor Swift’s ‘Love Story’, because words don’t mean much any more. I worry briefly that making these people dance twice a night is unfair, and then I remember that the Tony Awards are happening like, right now, and people regularly dance for two or more hours on Broadway all the time. So I stop worrying!

The first dance: Let me, as a theatre artist, let you in on a trick: Haze makes everything look better.

That includes this dance, a very minimal argentine tango to Drake’s very minimal ‘God’s Plan’. Although it was one of the best looking of the night – and I’d argue the season – I will bet you one million nothings that it looked a lot better on camera than it did in that room. The cinematography was on point, and it accentuated a neat lighting design while also hiding the fact that William was… not doing a whole lot of dancing.

It’s what I would’ve done, honestly. And if you’re doing what I, the guy currently sitting underneath two blankets and writing about television, would’ve done in a dancing competition, you might not be doing the right thing.

The second dance: I say this, with all the sincerity and gravity I can muster, that nobody needs to hear fucking ‘Wagon Wheel’ ever again.

The first dance: Let me speak two truths to you, neither of which is about this dance that everybody went nuts over but I didn’t quite because I don’t respect physical grace or precision apparently.

Truth the first: ‘Skyfall’ as a song makes no sense outside of the film. We like it because Adele sings the hell out of it. Outside the context of the 2012 film that made Javier Bardem play a problematically coded villain, where the hell is ‘Skyfall’ meant to be? What importance would that have to any relationship I might have? Why do I want to meet someone there? Why, Adele?

Truth the second: If there’s one song that does not need slowing down so that it can accommodate the elegance required by the waltz, it’s ‘Skyfall’, a song that sounds like a snail leisurely sliming down a piano.

The second dance: I have nothing to say about ‘Timber’, by the artist Pitbull featuring pre-S Ke$ha, but this dance is every stereotype people have about country music and people who listen to it! It’s good! Clinton remains an incredibly, unnervingly charismatic human being.

The first dance: Instead of me trying to explain why this was so great, let’s instead link to a tweet!

Am I maybe frustrated that this is the first time I’ve done this in the entire competition and could’ve saved myself a lot of words? Who can say, reader. I do so love writing these power-rankings.

Anyway, this is the best dance of the season so far. Passionate, emotional, stirring, and to a bloody great banger, ‘Judas’. Can’t fault it.

The second dance: A dance where someone throws a drink in someone else’s face is an automatic 30 from me. I’m easy! See you next Sunday for the final!