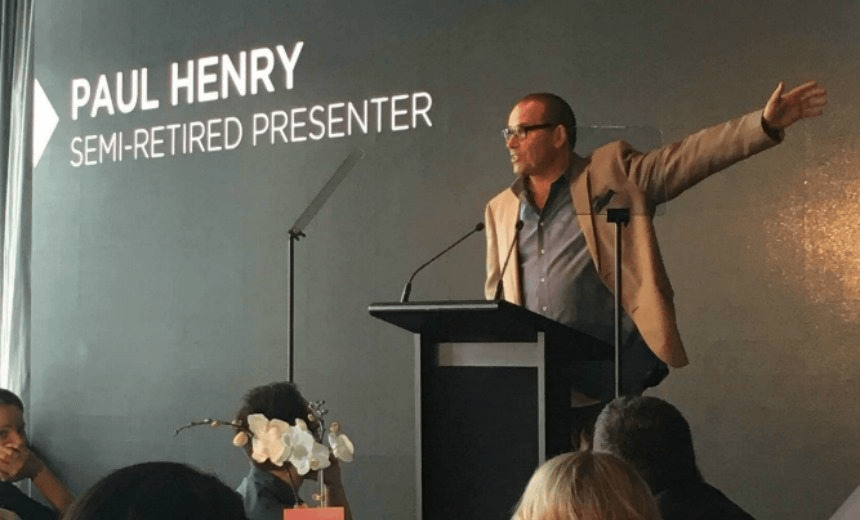 The Spinoff was in the room for the MediaWorks 2017 launch today, and was treated to a speech from the “semi-retired” Paul Henry. Despite the recent interview re-exposing his atrocious attitude to women, Henry absolutely tore the swanky Northern Club apart – if only for using the word “squits” about 400 times. Here is his speech, read on if you dare.

I’ve been given an announcement to make. This is the first time I’ll be doing one of these and there’ll be no fucking photos of me. You may notice I’m sitting next to my executive producer, rather than the head of news. Duncan Garner is sitting next to the head of news, which is good, because I’m as good as out the fucking back door.

I just want to say a few things about Paul Henry and the morning show. You know, what we did was truly bloody unbelievably brilliant. And you’ll never read about this because we don’t own any newspapers. I’ve talked to media who are saying how great Breakfast is on the other channel. But what you could do is you could actually look at the figures. And, you know, I’m so enormously, bloody impressed with what we’ve achieved in such a short time.

You might know what the landscape was like between 6-9am on TV3, before my show started. And it was a struggle. We had some good stuff on, but it was a struggle because there’s no default. We weren’t the default channel, we weren’t the channel that people were brought up with. So it was always a bloody struggle – and even when they did good stuff, no one saw it, you know? Now we are winning in that time slot. That is extraordinary.

We are doing so well that the state broadcasters got the squits so badly that they rushed to air with a shite programme that wasn’t ready for broadcast.

I may have gone slightly off track. Leon [Wratt, head of radio at MediaWorks], for some extraordinary reason, when he was talking about how brilliantly MediaWorks radio stations are doing, he didn’t mention RadioLIVE. Many of you people here in the room were privy to the results. Just have a look at the fucking results. It is incredible, Hosking must have the squits.

I’ve decided that the time is right just to go. But I love MediaWorks, and I’ve been involved in broadcasting for many many many years. What I love most about MediaWorks – and unlike some people in this room my contract is not up for renegotiation, thank Christ – what I love about MediaWorks is that it’s nuggety.

You think of all the great risks have been taken. You think of a family of broadcasters who take risks – and some of the risks haven’t worked, some of them have turned out to be shit. But you know they’ve taken risks and they’ve seen the need to change and they’ve changed. I’m just so madly impressed with the way MediaWorks runs. Not only with programmes, with management as well. My god. It’s been a fucking mixed bag, eh?

But you know what? We haven’t had one manager who hasn’t been absolutely committed to doing the right thing. That doesn’t mean they’ve always done the right thing, but they’ve been absolutely committed to doing it, you know? So I’ve loved being a part of that. Going forward, I’m very much committed to MediaWorks and I very much want to be thought of as a member of the MediaWorks family. I hope that Hal [Crawford, head of news] – if he can ever pry himself away from Duncan [Garner] – and offer me some great opportunities that will take me very little time to burn.

But I just want to thank you guys as well. I know there are people in this room who, quite frankly, fund MediaWorks. As one of the people who gets the benefit from that, I thank you very much for putting your advertisers our way and for supporting what is a very bloody nuggety media company.

To my great team who’ve put this programme together, I say thank you. Sarah’s done the most amazing job all the way from Australia, where together we put together a shit programme. And it’s got much better with the rest of the team. I know with Duncan it’s just going to be brilliant.