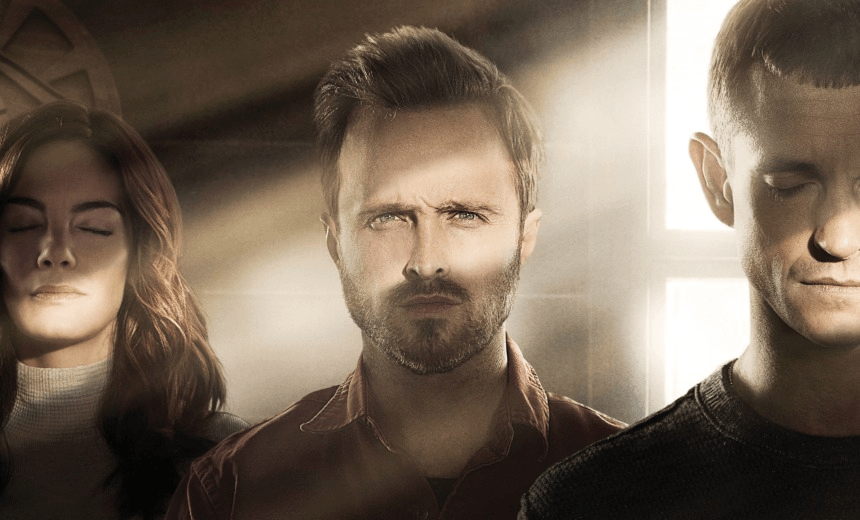 From meth to Meyerism: Aaron Paul talks Scientology and The Path

Dominic Corry sat down with Aaron Paul to discuss Scientology, Breaking Bad, and leaving his character at work on Lightbox’s new cult drama The Path.

Recently I was especially thrilled to spend some time in a Los Angeles hotel suite with Aaron Paul, an actor whose place in television history is already assured thanks to his iconic performance as the tormented meth-cook Jesse Pinkman in Breaking Bad.

Despite a flourishing movie career – you can next see him on the big screen in the Helen Mirren drone thriller Eye In The Sky – Paul has been lured back to television by the new Lightbox drama The Path, which is about the followers of a small religious movement known as Meyerism.

Disarmingly relaxed and collegial, the qualities that endeared Pinkman to the world are not hard to discern in Paul. That said, the temptation to view him as a real-life version of Jesse is ultimately curbed by the actor’s clear thoughtfulness and intelligence. And a lack of any utterances of the ‘B’ word.

Similarly, at first glance, it’s not all that difficult to see Eddie, Paul’s character on The Path, as an alternative evolution of Jesse Pinkman. Eddie is a loving husband and father who left his troubled past behind by embracing Meyerism, where he met his wife Sarah, played by Michelle Monaghan.

After returning from a religious retreat in Peru, Eddie is now beginning to have serious doubts about his faith.

Your character here is carrying a lot of weight on his shoulders, which seems to be a theme with you.

I think that’s the one similarity between Eddie and the character I played on Breaking Bad. They are both just going through quite a bit. I just like playing gritty characters. There’s nothing really black and white, there’s just so many different layers there. Through the series, more and more layers are revealed.

Are you able to leave your character’s heaviness on set or does it go home with you?

You gotta leave it on set for sure. I used to take it home with me, but I feel like I have a very happy beautiful life. I’m madly in love with my wife, I have a great family, so maybe that’s why I like playing these characters because they’re such polar opposites of who I really am.

Have you ever met anyone in a cult?

I think at the birth of all religions people looked at them with a judgmental eye and then they turned into certain big religions. If you read the bible, there are seven-headed dragons. It’s crazy, but there’s only specific things that people decide they want to talk about – they don’t talk about the seven-headed dragons. They don’t talk about killing someone because they drink alcohol. So yeah, I think we all know people in cults.

In researching this role, did you watch the Scientology documentary Going Clear?

Do you watch Better Call Saul?

What about Breaking Bad? Do you ever check that out these days?

To be honest, not really. When I’m flipping through channels and they’re doing a marathon or something, I might sit and watch an episode. I’m very fond of that show for many reasons. My wife and I keep talking about how we should re-watch the show, because I haven’t seen it since it aired. I actually watched the pilot a few months back but I think I’m gonna re-watch the whole thing. Eventually.

Head along to the chapel and click below to watch The Path, with weekly episodes arriving express from the US