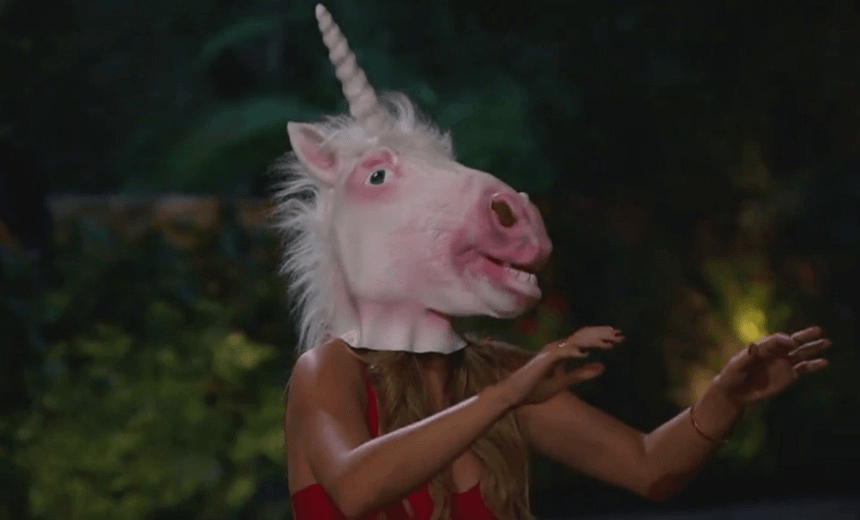 Seeking Mrs Higgins – Which Bachelor US Contestant Could Take the Biscuit?

Alex Casey watches the premiere of The Bachelor US, and notes down some powerful first impression techniques that could be used effectively in this year’s season of The Bachelor NZ.

If there are two things that I like in this world, it’s The Bachelor franchise and delicious home-style cookies just like Grandma used to make. Which is why I am overjoyed to announce that our man toting the red rose this year on The Bachelor US is Ben Higgins, sifting through the mixed chocolate chips of romance to find his very own Mrs Higgins.

The season began on TVNZ Ondemand last week, featuring not one, not two, but 28 potential partners for our shy Indiana software developer. He famously revealed in his first appearance on The Bachelorette that he has a chronic fear of being unlovable, which has all of middle America weak at the knees. Talking of knees, I’d be more concerned about where your legs are at this stage, mate.

So yeah Ben is very handsome, very unlovable and very lonely. What I’m saying is, the Akon doesn’t fall far from the tree.

Higgins is so odious, so repulsive, that only a few people come out to wave when he does a small local parade on the back of a yellow car.

Never fear Ben, there’s literally a CLASSROOM-sized gaggle of women waiting to woo your poor, tortured, gooey Higgins heart. But how to capture his white chocolate and macadamia eyes? How to secure a sticky date (with caramel)? Here are some of the boldest entries to the Bachelor mansion by the contestants this season.

Some of these efforts paid off and secured them a rose, and some definitely didn’t. I guess you could say… that’s just how the cookie crumbles.

“FOR FUCKS SAKE” I bellowed, the swear words bouncing from the rafters and scaring my cats as these two Taylor Swift doppelgängers tottered out of the limo. Bachelor franchise, listen up. I bust my ass trying to defend and commend you, but this is pushing me to the absolute limit. I’ve had it up to here with your nonsense. This is not the outstanding comedy film Austin Powers in Goldmember! You are not allowed to just throw in the reality equivalent of Fook-Yu and Fook-Mi in there like it ain’t no big deal. At least Austin Powers had Beyoncé! This is nothing!

Emily and Hayley, the 22 year-old identical twins from Las Vegas, are yet to appear in a separate shot or even in separate sentence clauses. If it was me I would have brought them out separately and timed how long it took Ben to notice (seven episodes). They are two different people, give them each their own frame and just let them live, for Pete’s sake.

Result: They both got roses, because Austin Powers is apparently a documentary.

Result: She got a rose despite giving Ben a full dental exam on a nearby Bachelor chaise-lounge. I don’t know anything about dating anymore.

Meeting someone for the first time can be hard. Is it a handshake? A hug? A kiss on the cheek? A gentle punch in the stomach and a peck on the earlobe because you decided to do all options at once? Cut out the awkwardness by taking charge, and jumping right into your suitor’s arms like Caila. It’s worth mentioning that Caila broke up with her boyfriend IMMEDIATELY AFTER watching Ben on The Bachelorette last year, which is totally fine and sensible and fair.

I would avoid being like Lace, who stormed in, demanded Ben close his eyes, and then aggressively kissed him. That doesn’t look cool, or consensual, and led me to yell out another thing that rattled both the cats and the neighbourhood.

Result: They both went home with roses. I predict Caila will be in it for the long haul and Lace will have a meltdown in the next episode and try to suffocate Mandi in her sleep with the giant rose hat.

NICE DAY FOR, OUR WEDDING

Make like Jackie and get crafting. There’s nothing intense about fabricating a fake ‘save the date’ for a wedding between two people who have never met, right? It’s fine to make your own joint hashtag, right?

I would have one-upped it and invited him to my funeral. Now that is long game.

Result: Jackie got a big old rose for her strange, strange efforts.

Breanne, possibly the worst, brought with her a hamper of baguettes in the limo. Upon arrival, she invited Ben to help her smash the baguettes on the mansion bricks – because “gluten is Satan.”

Result: Eliminated. This is Higgins you are talking to mate, gluten is everything.

This is just the most 2016 thing I have ever seen.

Tiara, her real name, introduced herself in her background video as a “chicken enthusiast”. She has framed photographs of all of her chickens, cuddles them and brings them to the bathroom with her to brush her teeth. Fowl.

Result: Looks like Higgins is going into business with the Colonel, because chicken-woman got a rose.

Result: That’s a rose for you too, possible Jigsaw killer.

With Normcore Nick breaking the mold for ex-contestants in the last season of The Bachelorette, the producers clearly got it into their heads that second-hand talent has got that vintage charm that can drive their value through the roof. Just like Adele using a flip phone, they have brought back relics from seasons past in Becca and Amber, who last appeared in Bachelor in Paradise, and before that The Bachelor. The only meta move left is to put Chris Harrison front and centre. I know it’s coming.

Who doesn’t love a very small horse in a house? Megan decided to bring along Huey, the single equine looking for love. What he found? A lot of interesting long evening dresses to stomp mud all over and piss off all the women. A hilarious edition, particularly when he shared a moving heart to heart with Chris Harrison about the perils of modern love.

Result: Megan got sent packing, I assume Huey and Chris are off sharing a brew together somewhere wonderful.

The Bachelor is delivered express from the US to TVNZ Ondemand, or click below to watch UnREAL on Lightbox, a dark behind-the-scenes drama lifted straight from the world of romantic reality shows.