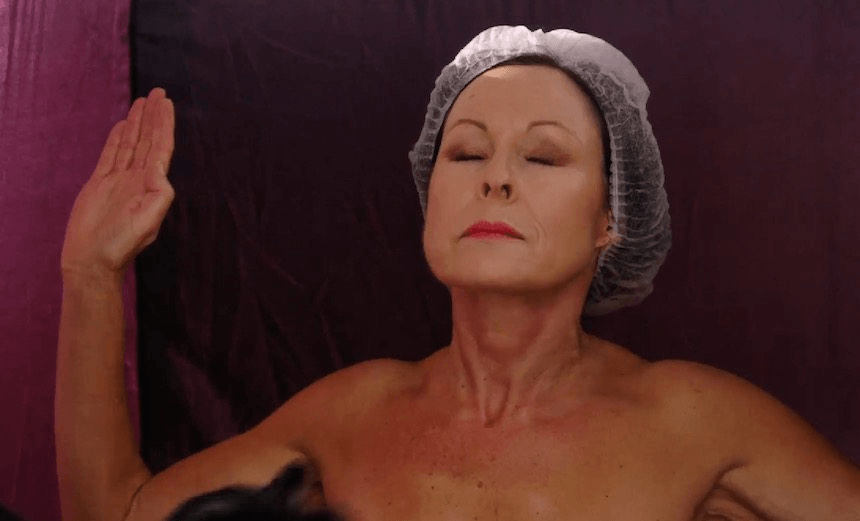 Just when you thought The Real Housewives couldn’t get any classier, enter this precocious little Benjamin Button figure. At the age of 12, young Rohan knows how to hold a champagne flute, talk at length about serviettes, and eat a bloody macaron without turning into a dust cloud. Also eff off, I didn’t have my first macaron until 23 and even that felt like cheating.

At his high tea with Aunty Anne, Rohan revealed that he was recently gifted a box of Chinese White tea worth $500 a box. When I was 12, I ate a family sized bag of salt and vinegar chips after school, washed it down with 4 milos and vomited up and down the hall of my family home.

He was also responsible for getting Anne to say the tensest thing that anyone has ever said.

Honestly, Anne getting a spray tan was an incredible sight to behold, but it couldn’t be done before a harrowing tale that ended with a racially-nightmarish sledgehammer. Turns out Anne was deathly afraid of the spray tan chemicals, after her head swelled up during a particularly nasty hair dye session.

Fine. Point made. You definitely don’t need to make a racial comparison here…

After that truly gobsmacking moment of old school, 18th century ethnologist-level racism, it was time for Anne to [deep inhale of breath] darken her skin tone. Louise dragged Anne into another room where she was presented with a spray tan tent and a paper g-string, and made a face akin to mine when I heard her talk about Mongolians just before.

Refusing to wear the G, [“as if I’ll wear a G-string in someone’s kitchen”] Anne took to the tent looking like Mrs Mop. As she was instructed to push her bum out and move her legs like a cat on a hot Paritai Drive roof, Anne dropped another truth bomb:

Can someone please ring the morgue and ask if they have any vacancies available for my own rapidly cooling corpse?

On top of her Port Douglas party-planning game this week, Louise was just absolutely bloody feeling herself. Be it her tan…

First: Enjoy this all-time great Gilda reaction face when regaled with the tale of Julia’s Santa sack of sex toys:

As per, Gilda took the high road after she shotgunned the good room in the Port Douglas villa, and Julia threw her sex toys out of the cot that she didn’t even have yet. With Julia turning full vampire neck, Gilda simply stood up, threw some garlic at her and took the bad bedroom downstairs (read: incredible luxe resort bedroom).

The greatest Gilda moment came this week when she played ‘Never Have I Ever’ with the women, and got wildly confused by the inverse nature of the game. Seemingly nobody had played it, which makes me think that drinking games could well be a product of the lower class sucking back Park Lanes to forget that they will never own Louis Vuitton dog leashes. Gilda didn’t understand the rules, and honestly looked like someone had asked her to crack the Enigma code.

Michelle didn’t know what to pack for her holiday this week, asking Gilda “did you pack a lot of kaftans” without even a tiny snort of laughter. This seemed like quite a relatable lady problem, until I remembered that she has a closet bursting with Gucci, and I have to choose between the singlet with the giant makeup stain or the jumper with the hole on the nipple every day.

She also passed on this sage piece of advice, for both people and footwear alike:

And DEFINITELY not a sparkly one, eh Angela?

Question: Will my skin ever stop crawling off my body and boarding the next flight to Port Douglas every time Julia and her husband have an interaction?

Answer: Never have I ever felt like the answer could be yes [drinks bottle of disco juice].

After packing nigh on 400 bikinis to take to Port Douglas, Julia was called a “halfprice deal” when she was forced to bunk with Gilda and Julia. As unrelenting in her pursuit of the good room as she is in achieving the neck of a newborn stingray, Julia gave a strong argument as to why she deserved it.

As if the Mongolian effort wasn’t racially problematic enough, Angela dragged poor Léa into WHITE spa this week, to soak their feet and have this truly horrific nail-scraping treatment done that sent my chakras right up the wazoo.

If you thought last week was bad for Léa, this week she was promoted to the super cool task of answering Angela’s PHONE for her. Does Angela do anything about from make scary cheshire cat and/or snake faces? A pending Spinoff investigation.

At least we can sleep easy in the knowledge that, while Angela may not yet be the biggest talk show host on the planet, she definitely owns the hugest hat in the Milky Way.

On this night of nights, pour one out for the poor bastard who dropped a plate full of cocktails in front of Gilda Kirkpatrick. May he one day recover and return to society from the woods where he fled shortly after this absolute disaster.