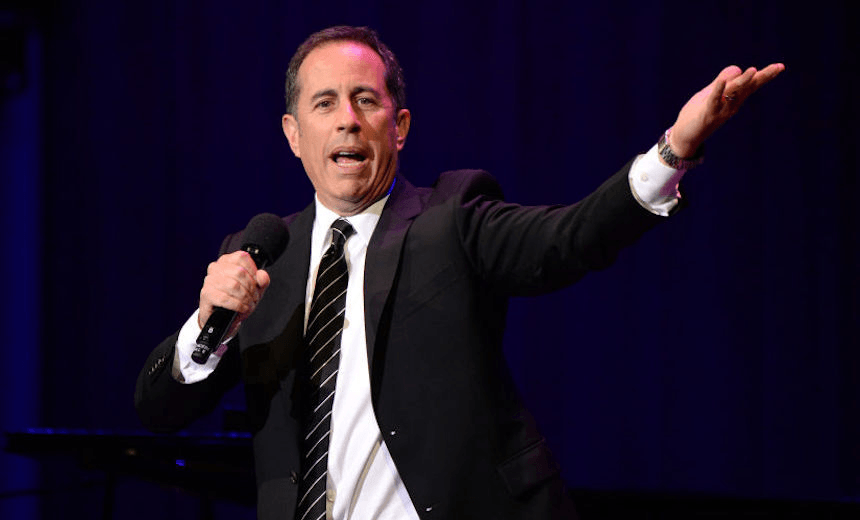 The master of his domain: Jerry Seinfeld live in Auckland

Henry Oliver went to see Jerry Seinfeld at Spark Arena on Saturday. This is what he thought of it.

There’s that cliche: never meet your heroes. I often feel like it should be updated: Never go see your heroes perform long after their peak.

I saw the band Television once and was bored. And when I heard that Chris Rock, when he performed in Auckland recently, was a yelling misogynist, it wasn’t exactly surprising.

So, when out of the kindness of an old friend’s heart, I was offered a ticket to go see Jerry Seinfeld perform at Spark Arena this weekend, my ‘yes’ was at once automatic and sceptical. I immediately considered the enormity of the risk at hand.

If it was good, I’d get 90 minutes of laughter and have one of those there-they-are-right-there-in-the-same-room-as-me moments you get the first time you see someone you know intimately through a remote medium. But if it was bad, the consequences could be dire. Nine seasons of one of my favourite TV shows ever, all wiped out by a whoa-you-can’t-say-that-anymore joke that would have tinged every episode of a series that, when it was originally on, I would dissect with my friends for the entirety of the following day’s school interval.

Thankfully, nearly 20 years after his show ended, Seinfeld is still Seinfeld. For an hour-and-a-half, he ran through a tight set filled with a slightly updated version of the comedy about nothing he helped popularise. Every joke could have started with “Have you ever thought about…” or “what’s the deal with…”, except while in the ‘80s/‘90s these were about being single and social in a big city, now they’re about being married, having kids and how hard it is to go anywhere. And that’s why Seinfeld still works in 2017.

There’s a part of comedy that is about pushing boundaries (“if it bends it’s funny…” etc.) and this often leads older, successful comics (who, perhaps aren’t as connected to the culture as they once were) to lose a feel for the bend. They end up breaking shit like a baby boomer in a china shop. But with Jerry Seinfeld, his comedic world is both so small (“isn’t X annoying?”) and so universal (“everything sucks, amirite?”) that it’s almost impossible for his misanthropy-lite to go off the rails.

Other than variations on the theme of “isn’t life annoying and bad?”, there’s no grand theory here that is specific or developed enough to age badly. Everything is always going to suck in an amusing way if you describe it in the right way. Sure, he was sharper in 1987, but in 2017, you know you’re watching a master when you’re still giggling like a stoned teenager. Jerry Seinfeld in 2017 is funnier than @Seinfeld2000 and way funnier than @SeinfeldToday.

And yes, Jerry, it is hard to get out of the house. Especially when you have kids.