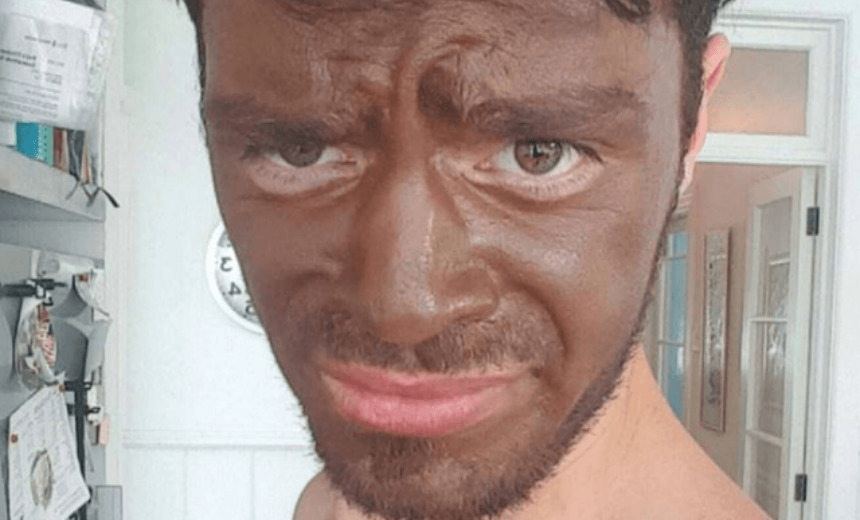 Shocker: Turns out Jimi Jackson’s a misogynist bully too

New Zealand woke up to the presence of a huge new internet celebrity this week thanks to the controversy around Jimi Jackson’s ‘blackface’ imagery. But a gross reply to a woman who commented on the image suggests his attitude to women is disastrous too, says Alex Casey.

Who would have thought it would only be a matter of time until a self-described “social media mad cunt” found themselves in a spot of bother. The MC in question is the hugely popular online comedian Jimi Jackson, who posted a Snapchat of himself with a darkened face, accompanied with the caption ‘Jimi Blackson’ to his 814,000 Facebook fans this week.

Māori Television are currently in production for Jimi’s own local show entitled Jimi’s World – and according to the “people’s comedian”, the photo was taken whilst filming for a forthcoming television series. As a Pākehā woman, I don’t feel it is my place to comment on the complexities of the Jimi Blackson controversy, so I’m going to grapevine away from that faster than you can say “Art Green at a birthday party”.

But I’m not totally done. There’s something beneath the photo that suggests another layer of controversy, like a delicious tiramisu revealed to be made entirely of cat craps.

Poor woman! Despite being burdened by these haunted, horned-up fingers – “made” for her by what I can only assume is some perverted Dr. Frankenstein – she’s STILL called a “slut” who has to “shut the fuck up”. We should all know by now that women who give handjobs are sluts, and sluts, much like oysters, must not have sentient thoughts. If they have sentient thoughts they stop being objects and when women who have sex start being treated like equal humans well… PC goes ballistic, the terrorists win and everyone marries their dog in a touching seaside service surrounded by close family and friends.

“He is a shocking role model for young people,” Nadezna Walsh told me later on Facebook chat, presumably typing with her elbows due to her gruelling prescribed handjob regimen, “I wasn’t even offended [by the image]. I just thought it was stupid, so I said so.” As for Jimi’s response, Walsh was shocked at the level of aggression, “I know his crass humour, but was disappointed that he felt that was an appropriate response.” Luckily for her, like so many other women familiar with so much as doing a gentle cough online, she’s learned to not let it get to her. “I’m thick-skinned so not too fazed. It’s more the people jumping on the bandwagon and being rude too.”

It’s this bandwagon that has got Jackson to where he is today, for better or worse. Up until this point, he’s been able to exist in an online bubble where like-minded mad cunts have opted in to access his content. There are no checks and balances, no critics, no bosses. But these are all realities of what’s going to happen to this new breed of social media star, especially one on track to be among the breakout TV talents of this year. If Hosking spewed defensive sexist or homophobic replies at every piece of criticism he got, not only would he have no time to vacuum his Ferrari – he wouldn’t have a job.

It also begs the question: is someone who talks to women like this the kind of person we want to support on our television screens? Had this been any other prominent New Zealand figure with even a scraping of a mouse’s fingernail of Jimi’s social reach, this sort of outburst would be admonished, and any upcoming projects sent to whichever special farm Heather Du Plessis Allan got sent to. And if you think that his influence is less significant because he isn’t on mainstream television or radio yet…

Why isn’t he being held accountable for using abusive and sexist language in the same way they would be?

Like several others I’ve tried to report his page for abuse, I’ve tried to have the comment taken down, I’ve inquired about it with Māori TV and I’ve even printed out the status, burned it and buried the ashes with a garlic necklace. But it remains there, gaining likes and support by the hour. What kind of message does this send to his 814,000 followers, and the hundreds of supportive ‘likers’ who think it’s totally fine to call a woman a slut and tell her to shut the fuck up merely for disagreeing with a powerful social media presence on a notoriously controversial topic?

The real kicker is that this wasn’t even conducted outside a vineyard, or inside a fictitious locker room where there might have been a vague thought that only a handful of people would ever see or hear it, as with more recent celebrity doozies. Jackson said this in an incredibly public forum, the power of which he must be intimately familiar with: it’s the same one that made him a star. He knew exactly how this would be received by his legions of fans, and exactly how they would mobilise in relation to the woman in question.

The comment remains hanging plainly in the ether for all to see. When asked for comment, a representative from Māori Television said the following:

“Jimi Jackson will be appearing in a new series entitled Jimi’s World that is due to be screened on MTS later this year. The series will be assessed by our censor before airing and will be expected to meet all requirements of the free to air code. We don’t condone the use of abusive language towards anyone and Mr. Jackson will be asked to tone down his language.”

I’m sorry Mr. Jackson (oooh) but misogyny is for real. You might need to do a little more than tone down the language to become a TV-ready role model in New Zealand. Might I suggest you begin by apologising a trillion times.