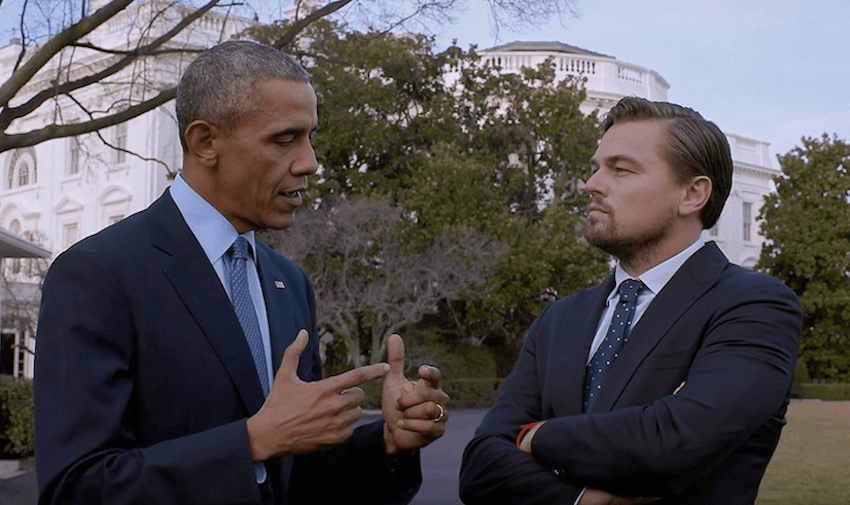 The bleakest climate change documentaries you can watch right now

Covering Climate Now: As the temperature of the planet increases, so to does the number of documentaries about climate change. Jean Sergent watched all of them to bring you this harrowing listicle.

Do you want to know which climate change documentaries will make you depressed and which will make you hopeful? Do you want to be shouted at for your choices, or would you like to be bored into submission? I’m here to help, because I, your hero, have watched six climate change documentaries so you don’t have to, and will now tell you which one is the bleakest, and everything else you need to know.

Watch it because: It’s an incredibly detailed overview of all the facets of climate change, and how we’re causing it. The host, Professor Stephen Emmott, is a full-on scientist and has a gratifyingly creepy posh accent which makes the information not only more compelling but also more alarming. It’s a bit like watching a very slow and boring Vincent Price horror film. It has incredibly high production values, even though it’s essentially a very long TED talk.

Avoid it because: It’s properly frightening, plus the intense detail makes it a bit of an overload. It’s a punishing 80 minutes so strap in. There’s no hope.

Bleakness rating: 10 out of 10 methane fields – we’re all fucked

Biggest takeaway: Don’t have any children.

Watch it because: It has a vibe that is more like a YouTube conspiracy theory doc, so that’s fun. Climate change isn’t a conspiracy theory, though (I just want to make that very clear). But the vibe of this doco is much more tinfoil hat than the others. It’s got an excellent breakdown of what changes will happen to the planet as it warms degree-by-degree. Species die. Glaciers melt. This gives it a building sense of dread, which is narratively satisfying.

Avoid it because: The narrator is possibly a Baldwin (I’m gonna guess Billy doing an Alec impression). It’s a bit long for how low the production values are.

Bleakness rating: 8 out of 10 dead rainforests.

Biggest takeaway: Things that seem conceptually small – like a one-degree change, or a melting glacier – are actually catastrophic.

3) Before the Flood (Netflix)

Watch it because: Leonardo DiCaprio is in it? I dunno, I’m still a bit suss about him and his girlfriends. It’s a good documentary though – slick, depressing, everything you want from a talented actor who wants to save the world. There’s a lot of exposure to the reality of climate change – oil fields, ice caps, a helicopter flying very close to a polar bear. There’s a truly fantastic segment where he’s in India and a woman yells at him about poverty and energy and how US citizens are the most selfish consumers in the galaxy.

Avoid it because: It’s incredibly US-centric. Which is fine because, on the one hand, the global north is responsible for climate change. But on the other hand, the US can get wrecked.

Biggest takeaway: Wind and solar are the only sustainable energy sources, which you already knew. But my god they really are going to save us all from our own choices.

Watch it because: Cows are ruining the universe! Cowspiracy gives a pretty well-rounded and detailed overview of the knock-on effects of animal agriculture on the environment. It’s produced by climate hero Leonardo DiCaprio – that guy again – but it’s Kip Anderson and Keegan Kuhn’s film and frames climate action as a personal journey way more than any of the others. How does diet contribute to climate change? Deforestation, water overuse, and methane emissions are all catastrophes caused by eating beef.

Avoid it because: It’s a bit dated and quite condescending. The dude presenting it is a bit like ‘woah, I’ve invented vegetarianism you guys!’ which is paternalistic, to say the least. That said, some incredibly scientific polls I conducted on social media show that People Sure Do Still Eat Meat Huh? So this documentary is still enormously relevant.

Watch it because: the OG TED talker talks again. Al Gore is a great communicator, and it’s really fascinating seeing someone who’s spent 30 years trying to get the message across, still fighting the good fight. There’s a nice amount of background on the history of climate change research and the lobby efforts against climate science. It’s very US-centric, as one can imagine, but it puts US politics into a world perspective. Everything economically that the US does has knock-on effects for the rest of the world, so I guess we can blame them for climate change? I’m happy to, if no one else does.

Avoid it because: There’s better information elsewhere. This doco is more about Al Gore than it is about climate change. That’s not necessarily a bad thing, it just is what it is.

Bleakness rating: 5 out of 10 photos of planet earth from space.

Biggest takeaway: Keep talking about climate change, no matter what your platform is.

Watch it because: it’s only 40 minutes long. It’s got some pretty good info about what scientists are doing about fuel and energy, so if speculative science is your thing, that’ll be fun for you. I’d tell you more but see my next point:

Avoid it because: It’s boring.

Bleakness rating: 1 out of 10 heavy-duty vehicles

Biggest takeaway: We’re addicted to transportation systems which are fucking our planet. I say “our”, but we don’t really deserve it.

Click here to read a review of 2040, a climate change documentary that isn’t even bleak at all