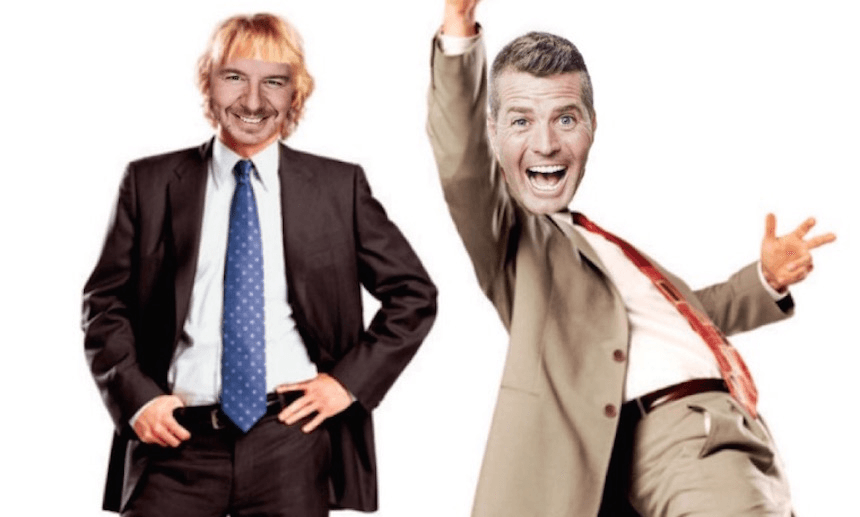 In an unexpected twist, the penultimate episode of My Kitchen Rules NZ pays homage to a classic Vince Vaughn and Owen Wilson comedy vehicle.

For the first two sudden death cook-offs, MKRNZ production booked out what seemed like popular and high-end wedding venues and invited a pick’n’mix of Kiwi celebrities to help eat and judge the food. For the final cook-off, a change of plans: this time they’ve double-booked with an actual wedding.

Pete and Manu, dressed up to the nines as per, have successfully infiltrated the Orakei Bay facility in Remuera, where the three remaining teams are cooking for the guests of an anonymous groom and bride. They’re like Vince Vaughn and Owen Wilson in the 2005 film Wedding Crashers, but instead of a romantic fling they’re on the hunt for a well-seasoned, perfectly-cooked bit of protein in a rich, tasty sauce.

There has never been more at stake for Teal and Sophie, Heather and Mitch, Chris and Bex. Suffer a kitchen nightmare here and it won’t just be Heather and Mitch harping and moaning, they’ll have a whole wedding party on their case. Not to mention the $100,000 carrot dangling tantalisingly at the end of next week’s episode.

Bex gives Chris a kiss as they head into battle. “Love you,” she tells him. Heather looks Mitch in the eye. “We’ve got to be at pace tonight OK? No fucking about.”

If the previous eight weeks have shown anything it’s that none of these teams can be trusted to make a non-disastrous dessert, certainly not for 80 people, so that part of the menu has been scrapped in favour of a canapé.

Chris and Bex make Chorizo and manchego croquettes, which Pete and Manu deftly intercept before any of the guests can get their hands on them. They seem to approve: “Nice and creamy inside,” Manu drools as he pulls his one in half.

Teal and Sophie’s Lychee with pickled cucumber and Chinese pork sausage canapé gets a raised eyebrow from Pete. “I think it could appeal to quite a few of the guests here,” he comments judgmentally. “Lychee as a main ingredient is a little scary,” whimpers Manu.

Heather and Mitch make Prosciutto and porcini arancini. “Very Italian,” says Pete. “Indeed,” Manu agrees. They love the texture and flavour, but it lacks a flavour hit. “Dare I say a bit boring for Heather and Mitch?” Pete dares to say.

Chris and Bex are up to their usual tricks (using 100 ingredients and doing fancy techniques) with their entrée, Sous-vide salmon salad with fennel, apple, beetroot and a hazelnut and sweet bourbon sauce. ‘Sous-vide’ seems to be French for ‘boil in a bag’ – “Now that’s technique,” nods an approving Manu. They have produced a salmon that Pete describes as “summery, fresh,” “well-cured” and “sensational,” though the sauce (750ml bourbon to 500g sugar) is “too sweet”.

Teal and Sophie are unlikely contenders for a Ramsay style kitchen meltdown, but their Pan fried scallops, spring onion oil, capers and apple Asian slaw drives Sophie close. Her spiraliser is giving her all sorts of grief trying to make the apple look like noodles, and the end result is sub-optimal to say the least. ”Shredded apple, no dressing, it’s not complete,” complains Manu. “No,” agrees Pete, who looks like he’s going to be sick.

Heather and Mitch, meanwhile, make Hapuka on caprese salad for their entrée. While behind the scenes Heather frets that “it looks like a dog’s breakfast,” Pete seems not to mind. “A great little wedding dish,” he calls it.

To the mains, and the final dish for one unlucky MKR duo. Chris and Bex have had their Confit pork belly with asian slaw and red cabbage puree on the go in the background all day. Pete scoffs his bit of pork in two mouthfuls, and has nothing but praise for the slightly spicy slaw. “It’s a bit left of centre,” he says, “but it works.”

Teal and Sophie make Lemongrass beef salad with Chinese sausage, fried onions, peanuts and liquid gold dressing. The beef is Pete’s “hero of the dish” – lovely and tender, with a beautiful flavour, but sauce addict Manu is left underwhelmed, wanting more of the liquid gold dressing.

Mitch has pulled out all the stops for his and Heather’s final dish, Lamb rack on sumac ricotta with broad beans and peas, working hard to create the perfect jus for Manu’s tastebuds. He produces a rich, dark sauce – “I think it’s the best one you’ve ever done,” says Heather. Her genuinely quite heartwarming praise continues when he cuts into a perfectly-cooked bit of lamb: “Bloody well done Mitchell!” Pete and Manu agree, with Pete calling the dish “quite modern, quite funky.”

It’s all down to the judges now, with each team getting an overall score out of 10 from each. Chris and Bex radiate light as Pete pours praise on their three courses, singling out their salmon as being “perfect, absolutely perfect.” They receive a 9 from him and a 9 from Manu, for 18 out of 20. They are through to the final.

Teal and Sophie, who avoided the previous cook-offs on the back of the highest Instant Restaurant score, looked a half-step behind the other teams all day. Pete “didn’t understand” the cream cheese inside the lychee, and while their scallops were perfect he says their slaw “lacked oomph.” They get a 7 from each judge, for 14 out of 20.

After a scrappy, sub-par kitchen performance in their cook-off last week, Heather and Mitch bounced back with a dominant performance when it counted. Their canapé lacked a bit of flavour and the hapuka was a little under-seasoned, but the lamb was sensational and complimented by what Manu called “one of the best jus I’ve ever had [on MKR]”. That was good enough for a 9, echoed by Pete, for 18 out of 20 and a spot in the grand final.

In hindsight, a Heather and Mitch vs Chris and Bex grand final has been on the cards from the very first Wanaka joke. Good vs evil, darkness vs light, lovely vs nasty etc. “Bloody Wanaka is Chatty Cathy,” Heather ranted just loud enough for them to hear in the shared kitchen, “can they shut up? All I can hear is them yabbering on some BS about god knows what.”

The script says the goodness of Chris and Bex will prevail over the bitterness of Heather and Mitch, who genuinely seem to hate their cheerful, chirpy Wanaka-dwelling opponents’ guts. Chris and Bex have been the best cooks all series, and the grand final judging panel of expert chefs should play right into their technical hands. But there is still a nagging sense that they could be big-time chokers.

Heather and Mitch, on the other hand, showed this week they are big game players. “I’d love to beat them, I’d love to just nail them,” Mitch fantasised at one point. That’s a grand final mentality if ever there was one. Don’t count out Heather and Mitch tearing up Chris and Bex’s fairytale script.

Next week: Things get so serious the teams have to wear full chef’s whites.