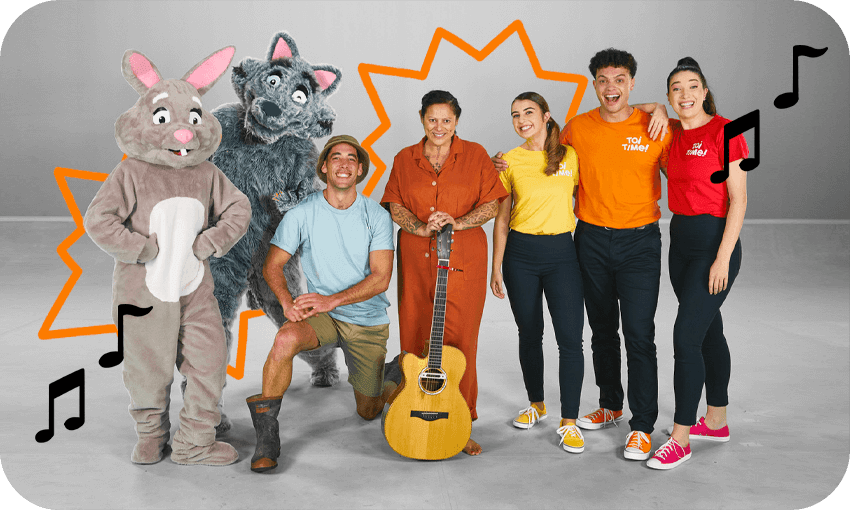 The multi-talented māmā speaks to Tara Ward about her new TV show and the joy of performing for tamariki.

Anika Moa has packed a lot of things into one lifetime. The award-winning musician has released seven albums, hosted two successful talk shows and made hosting a primetime news show look easy. She even reunited True Bliss, for crying out loud. Now, she’s taking on the world of children’s television with Toi Time, an energetic new show that debuted on New Zealand screens earlier this month.

A mum of four, Moa was inspired to create a New Zealand version of The Wiggles after the birth of daughter Marigold. “I used to hate The Wiggles, but when I had my fourth child, she watched The Wiggles and was obsessed with it and then I got obsessed with it,” Moa tells me over the phone. “I was like, I want to write better songs than them, or you know, have healthy competition with them.” En garde, Captain Feathersword.

At a time when youth television is dominated by overseas programming, Moa knew it was crucial that Toi Time championed te reo Māori and local content. “The most important thing is to have to Māori spoken so people understand it and kids grow up feeling proud of their heritage,” she says. “The second most important thing is singing and dancing. You can learn a lot through waiata, and it gets kids moving, moving off their devices and thinking.”

Moa pops up in every episode as Aunty Anika, a stern but kind figure who teaches kids important skills like teeth brushing or healthy eating through the magic of song. “Aunty Anika was me going ‘OK, how can I do this with my busy schedule and still be in the programme and not be the lead so I don’t have to film for four months?’” Moa jokes, but we could all do with a bit more Aunty Anika in our lives.

While the main Toi Time presenters are relentlessly upbeat, Aunty Anika joyfully subverts their wholesome efforts by singing about smelling poo and stinky underarms, all while wearing a unique brown jumpsuit (“It looks like I escaped from prison,” Moa reckons). After years of performing her multi-award winning Songs for Bubbas Volumes 1-3 albums to whānau around the country, Moa knows the best way to engage with younger audiences is to embrace your mischievous side. Songs about poo help, too.

“If it’s anything to do with poos or wees, you’ve won already,” she says. “If you meet a kid and just go ‘hi Poos,’ they will love you forever. They will just love you because kids only think in poo emojis and wee wees and Minecraft.”

Don’t panic, Toi Time keeps the poo content to a minimum – each half hour episode is filled with song, rhyme and motion, and Moa performs a mix of Song for Bubbas classics and new material. This is a show tamariki will want to watch on repeat, but it won’t drive parents wild to hear it over and over again. “I get a lot of parents sliding into my DMs, going ‘thanks for making music that doesn’t make me want to smack my head against the wall’,” Moa says, adding that this cross-generational appeal wasn’t intentional.

Toi Time will take Moa’s music to a new audience of tiny people, and having performed to both adults and children, Moa knows which audience she prefers. “Kids are way more fun because kids are like drunk adults,” she says. “They actually have no inhibitions, so they just sing, dance and have a good time, which is what I do. When you do an adult gig, everyone folds their arms or talks or ignores you or is too cool.”

Our newest baby whisperer is using her powers for good. Moa loves the way her music encourages tamariki to be positive and happy, and Toi Time is a show full of energy and joy. Moa and Toi Time might well be a match made in kids’ TV heaven.