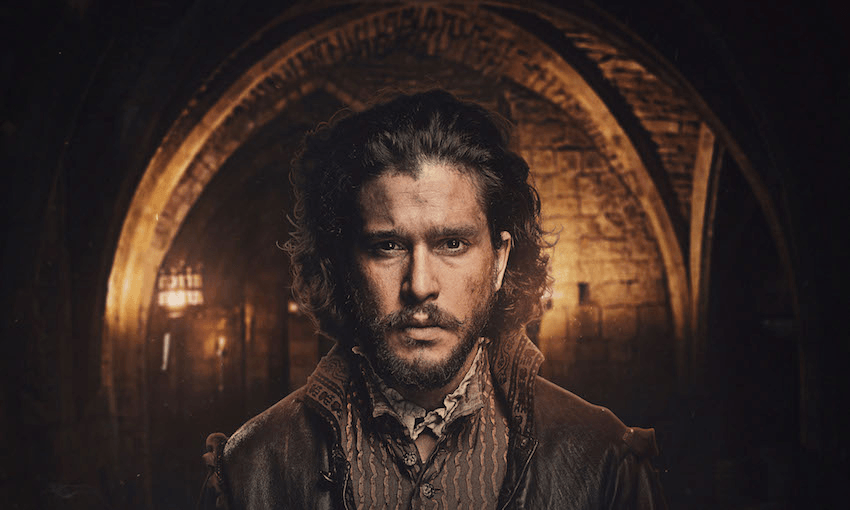 Sam Brooks argues why Catholic Rebellion thriller Gunpowder is far more interesting than other dour dramas from the same period.

I love a good political thriller. Stressed out people waiting for printers to print valuable documents, or wandering around with briefcases that cost more than your rent for the month – they’re my catnip. But it’s not often you get a political thriller set in the 17th century. Most fiction set in this period is about women in dresses made of curtains and men with pants higher than your nipples.

Gunpowder focuses on the Gunpowder Plot – you know, the failed terrorist plot that we commemorate by lighting fireworks –but rather than focusing on Guy Fawkes, it hones in on Robert Catesby (played by Kit Harington), who was the perpetrator behind the plot. As with most shows of this ilk, the plot is really just the framework to discuss complicated characters, complex motivations and to watch some actors dig into some meaty, broody material.

The other itch that Gunpowder scratches – potentially the more obvious and immediate itch – is the Game of Thrones one. I don’t partake in Game of Thrones anymore because I prefer to watch TV that makes me smile, but Gunpowder has a lot of that show’s visceral and drawn out brutality. It can sometimes get a little bit much, but the considerable upside to the brutality is that it gives the drama the high stakes. When you see someone being crushed to death with stones and refusing to repent their faith, you realise exactly how dire life was for the dour Catholics in the 1600s.

That brutality isn’t just limited to physical brutality, but the brutality of people in power who are desperate to stay there. One of the most interesting and compelling things that Gunpowder does is showing us the ways in which faith and religion can be twisted – to be used as both sword and shield, a path to uprising or downfall. It’s a dark and prescient reminder that everything is political – especially the things that those of hold most personal, like our faith.

Also, Kit Harington is in it. His performance is a flipside to Jon Snow, or at least the Jon Snow I remember when I stopped watching Game of Thrones. Catesby is a more committed, stalwart and stubborn kind of a hero than the meek, dishwatery Jon Snow. Catesby has been persecuted and he’s out for vengeance, which is fair enough given how many Catholics are killed in the first episode of this show. He’s an entertaining and compelling enough lead for the show to revolve around, but the more compelling performances come from smaller characters, like Tom Cullen as the iconic-but-unknowable Guy Fawkes and Peter Mullan as the morally dubious priest Henry Garnet.

Liv Tyler is the show’s sole female lead, and seeing her in this reminds me of how immediately charismatic she is. There’s one moment in the first episode where she says a line that is almost verbatim from The Fellowship of the Ring and it transported me back to being 11 years old and being confusedly in love with her. She brings a gravitas to the potentially stereotypical role of the aggrieved love interest with a real sense of loss of life, loss of faith and loss of hope.

If you’re looking for a 17th-century political thriller revolving around a famous terrorist plot I don’t know where else you’d look, so Gunpowder is your best and only bet. But as these kinds of shows go, it’s one of the more compelling, and compellingly visceral takes on what could be a really emotionally remote event. Plus – Jon Snow.

Click below to watch 3 part miniseries Gunpowder, exclusively on Lightbox: