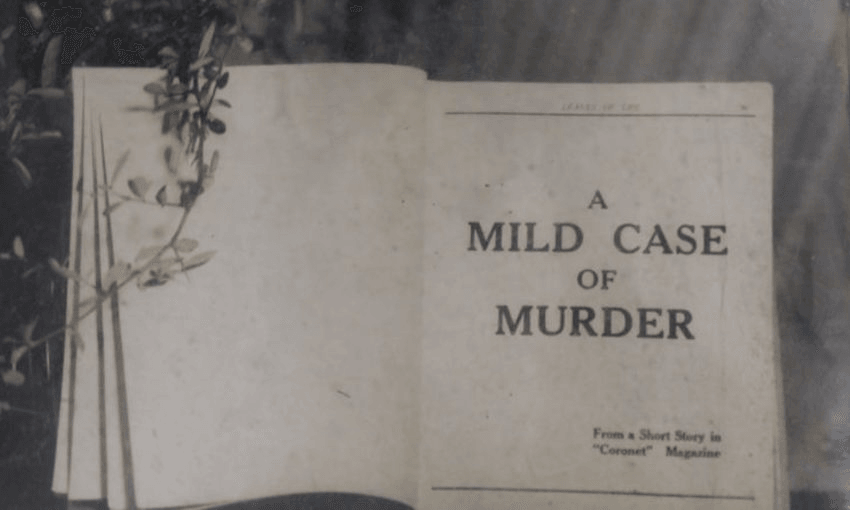 The case of the missing movies

By Ngā Taonga Sound & Vision
Guest writer
Made possible by

“A Mild Case of Murder”, one title shouts. “The Wife Who Knew”, insinuates another. “Happy Honeymoon – A Near Tragedy”, warns a third. Film-making is serious business and involves many people – can a film really leave no trace?

In February 2020, Ngā Taonga received a trove of photos from a depositor that intrigued our documentation and artefacts team. They seemed to be promotional and behind-the-scenes shots of several film productions, but none of our staff had ever heard of them. The titles had us hooked, but it wasn’t until Shane Farrow, our depositor experience manager, spotted the logo of Neuline Films on one of the albums that suggested these might be lost Robert Steele movies.

The person of interest

At various points in his life, Robert Steele ran a photography studio, was involved in window displays, set dressings and repertory theatre. He later became a significant film-maker. As Neuline Films or Robert Steele Productions, he created many industrial films from the 1950s to the 1970s – think factory behind-the-scenes, tourism promotion and short features about forestry or dairy.

His early work would, then, be fascinating to view, but seems to have vanished. Steele’s 1931 film Shattered, about the effects of war, has left no trace – nor have most of the films he made in Australia. Steele spent parts of 1934 and 1935 in Queensland where he produced four films (including Corroboree and Rodeo). If anyone knows about these films – or has a copy – please get in touch as we would love to know more.

Adding to the intrigue around Steele’s work are the production photos recently deposited by Geoff Bertram. He had inherited them from his mother, Antoinette Bertram, who was the art director and oversaw continuity for some or all of these productions. Sets seem to have been built in studios and are professionally lit. For filming, a measuring tape for correct focus and exposure is used, in addition to a dolly. These features and the number of people shown on set suggest they were films of reasonable scale – all the more surprising that we have no record of them.

As a student, Antoinette was involved with both the Auckland and Catholic Repertory Theatres and we believe that others from this group may have been involved in the move to film-making. Unfortunately, that’s all Geoff knows about the films, as Antoinette only talked about her former career in passing.

We are, however, able to put together clues from Antoinette’s life that help pin down the dates of these films. Happy Honeymoon was made late 1939 or early 1940 based on a handwritten note identifying Bertram as “Antoinette Dunlop” – her maiden name. Geoff Bertram also figured that Mild Case and Wife Who Knew were made after 1940 but before the mid-1940s – after Antoinette was married but before she had children. The family moved to Wellington in 1947, leaving Auckland film-making behind.

Missing films and an air of mystery – here’s what we think we know so far. Notes on some of the Happy Honeymoon – A Near Tragedy photos identify it as an E. LeRoy presentation, and a search of Digital NZ showed that E. LeRoy Ltd was a tent, camping and outdoor supplies store on Queen Street in Auckland, just down the street from Neuline. This suggests that Happy Honeymoon may be either an advertising film or series of photographs for the store, designed to look like a movie. This collection of photographs was loose (not bound in an album like Mild Case and Wife Who Knew) and most feature tents and marquees. If it was an advert film reel, it would be unlikely to have been kept or archived. Alternatively, Steele’s photography studio may have captured these scenes for magazine or ephemera advertising such as postcards.

Establishing a narrative is a challenge, but we can see a double wedding taking place with a reception in the backyard of a house. One of the couples visit a travel agency and are also pictured looking soaked, with their tent in ruins. A cautionary tale to only use the finest outdoor equipment, purchased of course from E. LeRoy?

Stills and set photos from both other films come in spiral-bound photo albums but are otherwise a research cold case. Papers Past searches for the titles and their stars have turned up little, so we turn to close inspection of the photos and conjecture. A Mild Case of Murder was adapted from a short story in Coronet magazine, though no record of the story or copies of the magazine from the 1930s have been found yet. It seems to be filled with pulp and noir tropes – photos show a gun being pulled on someone in bed, a police officer pointing accusingly at a man, and the gunman in a prison cell.

There’s also a young priest surrounded by a gaggle of proper-looking church ladies, who later reappear in choir robes. Is that a devilish gleam in his eye? Who was murdered and whodunnit? We remain in the dark but are hankering to find out.

Meanwhile, in The Wife Who Knew, we see a surgeon and younger nurse at work. Are they colleagues, or something more? Later on in the suburbs, the doctor arrives home while his wife looks nervous. Over a meal, we also see the couple reading about a horrible murder in their respective newspapers. Is it the nurse’s murder? Or may it be related to A Mild Case?

A number of photos show Antoinette Bertram at work. Robert Steele also shows his versatility, as both the director and appearing onscreen as a tough type called Byron Shoup. Actors May and James (Jim) Lovatt appear in both films. Guy Nixon was also involved in all three productions and it’s reasonable to believe other uncredited talent worked with Steele on more than one of his productions. One strikingly glamorous photo of a young woman stands out from the rest of the book: could she be Hazel Holiday, who is credited as playing the nurse?

The strong shadows and pulp tropes that these photos suggest were later on display in Curves and Contrasts, starring the notable Auckland dancer Freda Stark. Robert Steele described how “these studies are taken as experiments in lighting, all of them being in my favourite style of low key”.

The trail goes cold… for now

Where have these early films gone? Perhaps the simplicity of photos meant they alone were kept. An album of photos can be flicked through by anyone – a film would require a projector and specialist equipment to enjoy at home. For now, this collection will be cleaned and rehoused. Each photo is stored in an acid-free envelope and kept in an acid-free box. They’re then deposited in cold, dark storage at our vault in Motutawa Avalon.

Surely this can’t be the last we’ll see of these early Steele films? Do you recognise any of the people in the photographs or cast lists? Do you have a copy of any of the films mentioned? Please get in touch. We are determined to crack the case.

This article was first published on Ngā Taonga Sound & Vision