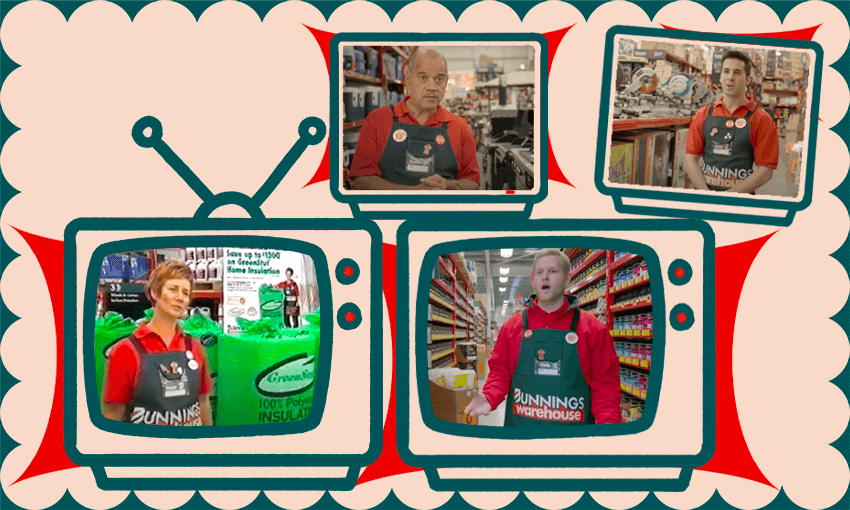 The truth about the Bunnings ads

The distinctive, no-nonsense Bunnings Warehouse ads have been on our screens for over a decade. But have you ever stopped to think about what goes into making them?

Whether it’s a young unruly tourist flipping the bird from under a branded straw hat, a questionable timber load in Takanini or the heated debate about whether the onions should go atop or below the sausage, Bunnings Warehouse is never far from the headlines. Set foot in any Bunnings and you might encounter a humorous viral sign about weed, or a furious anti-masker “Karen”, or even local celebrity Jesse Mulligan buying four lightbulbs, two lamps, some colour swatches, a multiboard, a tin of varnish, two drillbits, and a paintbrush.

But there’s a more understated pop culture offering from Bunnings that often flies under the radar: the extremely chilled out ads. Where some ads featuring “real people” give the impression that the talent is eyeballing a loaded gun, the cheery soundbites from Bunnings staffers are such a TV mainstay that they’ve become a source of parody and even occasional outrage. But what goes on behind the scenes to make the ads look so effortless? Are they too good to be true? I rang Big Bunnings to find out.

Perhaps the most burning question from at least two people on Twitter and somebody on a dusty old Aussie Reddit is this: are the people in the Bunnings ads real, or are they highly skilled actors? “They are 100% real,” laughs Delina Shields, head of marketing for Bunnings New Zealand. “I don’t think they could be any more real.” The ads all feature genuine Bunnings “team members”, she tells me, and are filmed at the very same stores in which they usually work.

Cordoning off an area of the open store for the small crew, the customers you see bustling around in the aisles are mostly real too. “From time to time there might be a cameo from a family member or a crew member filling in,” Shields admits, “but that’s only if we don’t have enough customers at that moment in time.” Thankfully, they’ve never had to ward off any photobombers or fame-hungry DIY enthusiasts trying to get their big break in the background.

This particular genre of Bunnings ad has been on New Zealand screens since January 2008, when the brand updated from their previous campaign that largely featured line drawings on building paper. “It just seemed like a genuine and authentic way to bring our brand to life on TV,” Shields explains. “Nothing you see is scripted – it’s just team members answering a question like ‘when you think about a wonderful living space, what does it mean to you?’ And that’s what you see.”

There isn’t any shoulder-tapping happening either. When a new campaign is coming up, Bunnings staff receive internal comms about the theme of the ad – plants, Easter, decorating – with an invitation to put themselves forward. “Those team members who want to be on TV and feel passionate or excited about the area we’re going to talk about will put their hand up,” Shields says. “Then our agency will meet with them and just have a bit of a chat.”

Shoot days happen on location and can often go from the time the store opens to when it closes. Staff don’t get a monetary bonus for appearing in the ads, but they do get a commemorative badge to add to their apron. “If you’ve been in a Bunnings store you’ll have seen our team members proudly display badges based on their training and expertise,” explains Shields. Basically, if you want to go star-spotting the next time you hit your local Bunnings, keep an eye out for a pin that says “As Seen on TV” and ask for an autographed piece of MDF.

Advertising is hardly renowned for representing a wide range of regular folk, and Bunnings ads can sometimes swim against the tide of flawless ad women and chiselled ad men. Shields says the diversity in Bunnings ads is simply reflective of their wider workforce. “We don’t go around saying ‘we want that kind of person’ [for the ads]” she says. “We’re very proud of the diversity of our team and them bringing their true selves to work.”

Although she can’t put a number on how many Bunnings staff have appeared in ads over the years – “suffice to say it’s a lot” – Shield says there is one ad from 2020 that sticks out in her memory. Starring Jah Snow-Pere, a Bunnings garden centre expert, the ad was filmed entirely in te reo Māori for Te Wiki o Te Reo Māori. “She was very, very passionate about te reo and she spoke fluently and beautifully,” says Shields. “That one has a very special place in my heart.”

At the end of every Bunnings ad, the camera zooms out dramatically to reveal hundreds, maybe even thousands, maybe even millions, of Bunnings ad stars nestled within the Bunnings logo. Over the years, they’ve offered their expertise on everything from how to keep your weeds under control (Round-Up), to what to get Mum for Mother’s Day (fan heater, $15.99). “People come up to them and say ‘hey, you’re from the Bunnings ad’, which is really fun,” says Shields.

“Everyone who’s been involved says it’s a real highlight of their Bunnings career.”