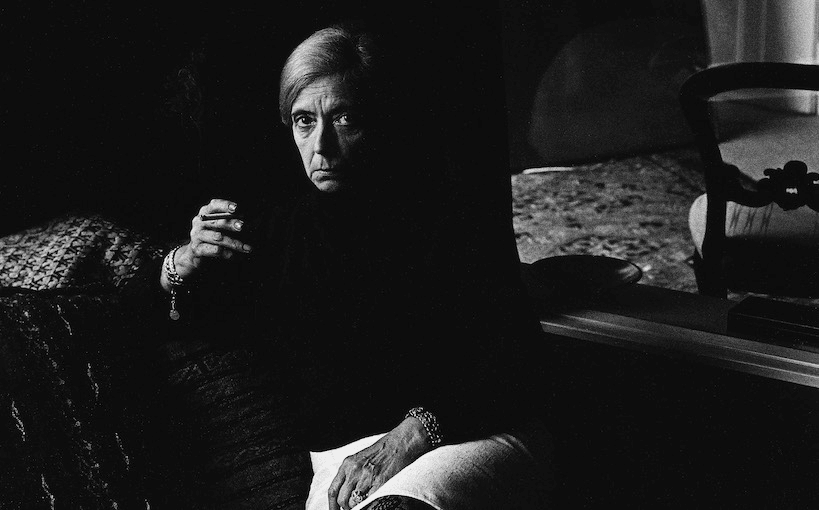 Serena Bentley writes on an illuminating survey in Auckland and Christchurch of the work of a daring modernist artist deserving of wider attention.

Cigarette in hand, Dame Louise Henderson stares straight down the barrel of the camera. Her gaze is magnetic. So begins this exhibition, a partnership between Christchurch and Auckland art galleries, with the artist positioned front and centre.

The photograph was taken in 1972 by fellow artist and friend Marti Friedlander, revealing Henderson, aged 70, at the height of her powers.  Henderson was a Parisian who in 1925 moved halfway around the world to Aotearoa for love, championed modernism in an antipodean context and brought radical new cultural perspectives to her chosen home. Henderson occupies a unique position in our country’s art history. Despite and perhaps because of this, she is not a household name.

Louise Henderson: From Life is revelatory. The rich breadth and depth of the artist’s seven-decade-long practice unfolds chronologically, charting the artist’s stylistic progression from modest landscapes to cubism-influenced abstraction and on to more intuitive and lyrical scenes.  Perhaps, like me, there will be paintings in the show that re-emerge from the edge of your psyche – Portrait of Betty Curnow, 1954, and The Lakes (Triptych), 1965 – works that occasionally crop up in anthologies of New Zealand art (though much less frequently than they should). If you’re not intimately familiar with her practice, Henderson’s dramatic changes in style can make it easy to think that such works were not painted by the same artist.  Perhaps this is why Henderson is not as well known as some of her contemporaries like Colin McCahon, Gordon Walters and Rita Angus, who had more immediately distinctive styles.

Curators Felicity Milburn, Lara Strongman and Julia Waite argue that despite these seemingly abrupt stylistic changes, Henderson’s work can be identified by “a complex language of layered and interlocking shapes” encapsulated in their delightful observation in the catalogue that “the paintings have no full stops”. Facade in Florence 1959 is a handsome example. An architectural form is broken down into flat planes of powder blue, brought into relief by carefully calculated corresponding areas of cream and brown. Even early works like the sculptural On My Verandah, c1930 – in which stocky pot plants radiate against undulating hills – have a pleasing hum. There is a rhythmic quality to Henderson’s paintings that makes for most satisfying viewing.

Henderson’s work shows an unwavering confidence in her vision and craft. It is reflected in the gaze she exchanges with Friedlander, in the tightness of her compositions and in the female figures that pepper her oeuvre – Portrait of Betty Curnow a case in point. Arguably a response to Rita Angus’s iconic portrait of the same sitter, painted 12 years earlier, Henderson’s version shuns the popular regionalist style of the time in favour of a more “international” approach, with the influence of cubism evident in the subject’s faceted form. While Angus provided a detailed domestic context, Henderson’s portrait is stripped back, presenting an exotic and confident cosmopolitan woman with minimal attributes of flower, cigarette and shawl. She is strong, independent, and seductive. One could argue this is as much a portrait of Henderson as it is of Curnow.

The biggest revelation is Henderson’s Bush Series 1970-72, painted on the artist’s return from a period of extensive travelling in Europe. The fresh green and blue palette and rich compositions of these large-scale paintings of the bush in Aotearoa radiate. Here is an artist immediately inspired by the vitality of her surroundings. Despite being created over 50 years ago, the series has a distinctly contemporary feel – Henderson applies her “all over” compositional approach  to the ephemeral effects of light and shade. There is a palpable immediacy in their execution.

Printed wallpaper in exhibitions is often gimmicky, but the reproduction of the artist’s Auckland studio (still standing but now in disrepair) in the final gallery reveals the context in which these works were created, eloquently personalising the exhibition.

Louise Henderson: From Life redresses a gap in Aotearoa’s art history by presenting the first major retrospective of Henderson’s work. It is a tightly curated and compelling journey through a diverse oeuvre by an artist whose contribution and legacy to the cultural life of Aotearoa is abiding and unique.