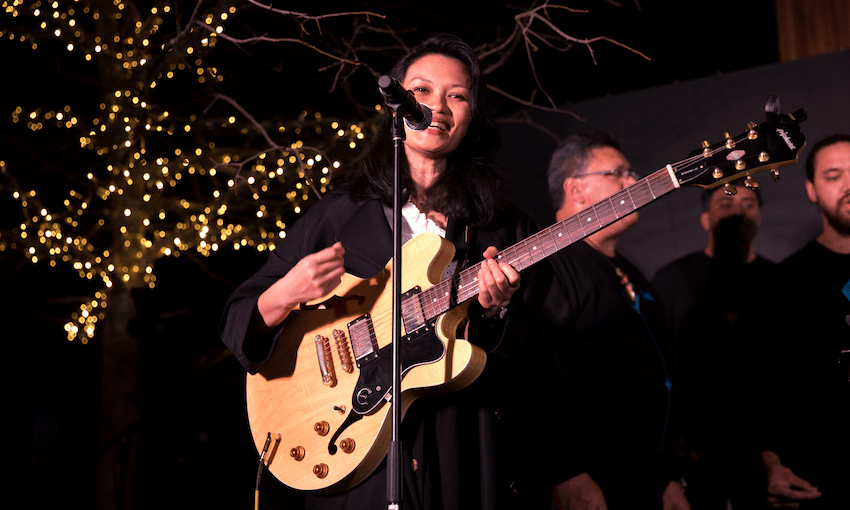 A new version of Bic Runga’s classic single ‘Sway’ is among the tracks on Waiata/Anthems, a compilation of te reo Māori versions of hit New Zealand songs. Runga spoke to Alice Webb-Liddall about how recording ‘Haere Mai Rā/Sway’ helped her reconnect with her whakapapa.

Bic Runga’s father Joseph was a Māori ex-serviceman whom Runga and her sisters would watch as he worked through land claims for their iwi, Ngāti Kahungunu. They never spoke te reo Māori; the cultural divide between their Chinese Malaysian mum and Māori dad meant it was English at home and, growing up in Christchurch in the 80s, learning a second language seemed unnecessary.

Instead, their parents raised Pearl, Boh and Bic with an identity in music.

At 20, with her first single, ‘Drive’, Runga won the coveted APRA Silver Scroll, a prize awarded annually to one New Zealand song on the basis of songwriting. Her second single ‘Sway’ went international, charting in Australia and the UK as well as at home; her first three studio albums debuted at number 1 on the New Zealand charts. Now, 22 years after her first album was released, Runga has begun a journey to know her Māori whakapapa, inspired by her work with singer Hinewehi Mohi on Māori language album Waiata/Anthems.

“I got this email from Hinewehi. The Merata Mita documentary had just come out and I received an advanced copy and I was sitting in the artist’s residence trying to take stock and figure things out and these two things just landed in my lap. I’m not really one for signs but they were pretty significant moments for me,” Runga explains.

Twenty years since Mohi sang the national anthem in te reo Māori at the 1999 Rugby World Cup, causing immediate backlash, some of New Zealand’s best-known artists are performing their hit songs on an album curated by her and translated to Māori with help from Sir Tīmoti Kāretu (Ngāi Tūhoe, Ngāti Kahungunu).

Waiata/Anthems was the first time Runga had performed in Māori. Given her disconnection from her Māori whakapapa, the offer to appear on the album was intimidating, she says, but came at a profound time.

“I was at the Christchurch Arts Centre just after the massacre and feeling quite confused about everything, actually. There’s a real process of taking stock in the shadow of that massacre… That was the feeling I had sitting there when I got this email from Hinewehi.”

Through all the trauma and upheaval of that time in Runga’s hometown, working on the album and finding her voice in te reo Māori was therapeutic, she says.

“Everyone has to just check themselves. In a way, this album was a driver for me to go into te ao Māori, to find some shelter from all of this, and that’s what’s driven this for me, being a part of this record – finding somewhere to get away from the noise.”

Once ‘Haere Mai Rā/Sway’ had been translated into te reo Māori, the recording process was far from easy. Runga estimates about 60 versions were recorded before she and Mohi were happy with it, both of them determined to get all the pronunciation correct.

“I was reasonably culturally disenfranchised growing up, so to be given the opportunity to have my song translated by Sir Tīmoti Kāretu and then be schooled by Hinewehi, that is some inner-circle stuff. It felt so right, really comforting. It really did feel like a shelter.”

Now, after its release on the anniversary of Hinewehi Mohi’s anthem protest, Runga is inspired to keep digging into the history she felt disconnected from her whole life.

“I think isolation is the word I would use to describe our family. I always had a pride in being Māori and it came from watching my father being quite involved in [land rights] stuff. There was always a feeling of having to fit in to my environment in a way that I thought was right. In hindsight it was kind of uncomfortable, but it’s taken me this long to realise that.”

Her friendship with Mohi has been a catalyst to embarking on the journey, sharing knowledge from their shared iwi, Ngāti Kahungunu.

“It’s kind of cool being my age and then being able to uncover as an adult all these threads. It’s something I could spend the rest of my life doing. It’s okay to do it backwards, it’s actually invigorated my whole life. There I was having all sorts of midlife head scratching moments and it’s all there for you.”

While Joseph Runga has passed away, Bic says she thinks her exploration of te ao Māori would make her father proud.

“I had never been to a tangi until I went to my father’s one. I had the opportunity to go and visit his tūrangawaewae a few years before he died. It was a way of him quickly connecting us and he always described it as grounding.”

Runga hopes this knowledge will inspire her to create more music in te reo Māori. “Hinewehi and I talked about it a lot. [The album] left me a bit confused as to what I do next because I want to do this more. It was hard to beat the real meaning behind everything in Māori. Everything else seems a little bit light in comparison now.”

Her thanks, she says, goes to the patience, kindness and immeasurable tutorship of Mohi, for giving her the platform from which to begin her te ao Māori journey.

“I feel like I’ve been given this great opportunity. Before Hinewehi came into my world, I don’t really know that I knew where to go.”