Photographs of tūpuna Māori are fetching top prices at auction houses, with their descendants often forking out to ‘bring them home’.

Māori political activist Ken Mair, along with a group of Whanganui Māori, interrupted the auction at Webb’s Auction House in Auckland. They argued the photos were a Māori taonga and called for them to be returned to the Whanganui River iwi. It was the first recorded protest in New Zealand for the return of photographs. Neither the estate – the descendants of Partington who were selling them – nor Webb’s had consulted Whanganui River iwi about photographs of their ancestors going under the hammer.

Nineteen years later, almost to the day, in September this year, Webb’s held an online auction named Whakaahua Māori: Images of tangata whenua 1860-1910. For sale were 106 historic photographic prints of Māori at the turn of the century from a single, private collection. The collection included notable photographers such as Burton Brothers, Josiah Martin, Pullman Studios, George Valentine, Stephen Thompson and James Partington. This time around there were no protests, the auction went ahead as planned, with 100 individual bidders, and each and every photograph was sold.

A photograph of a painting of Tāmati Wāka Nene painted by Sam Stuart sold for the highest price in the auction. The subject was a Māori rangatira of Ngāpuhi, who notably (and controversially) fought as an ally of the British in the 1845-1846 Flagstaff War. The “rare and striking portrait” that had a pre-sale estimate of $500-$1,400, went for an eye watering $23,500. 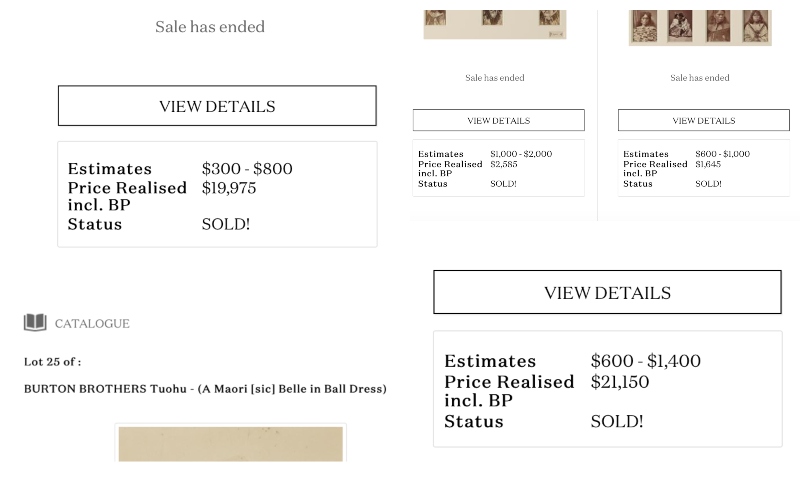 A selection of auction sales of photographs of Māori.

“That’s not a pretty picture on a wall for us, it’s our blood descendants that we come from, so I just find it very hard that we’re put on auction to be sold off,” says Amber Craig (Ngāti Kahungunu ki Wairarapa, Rangitāne Wairarapa, Muaūpoko).

Following a link to the Webb’s auction page a friend had sent her, Craig found seemingly endless photos of tūpuna for sale.

“When I first looked at it, I felt such mamae, because I know, having come back home, there’s a lot of my tūpuna I’ve never seen photos of, so my automatic thought was to their descendants who may have never seen these photos.”

While scrolling through the auction page she recognised a photo of Te Ore Ore marae in the Wairarapa.

Craig wanted to bring the photograph home, but was astonished by the sky-high prices being bid on many of the photographs – some of which had already reached the thousands.

“I think there was a bit of an issue for me; do I play into this concept and buy back a taonga that we shouldn’t ever have to buy back, or is it worth just bidding on it and getting it back?”

In the end, Craig decided to bid on the auction. She won; paying $750 for the photograph with the help of various Twitter users who made contributions. Craig has since gifted the photograph back to the whānau. Many had never seen the image before.

“It was only because people – out of the kindness of their hearts – donated money, that we were able to buy back our marae photo.”

Craig wants to see auction houses like Webb’s taking responsibility by identifying the subjects in photos and where they’re from, then offering them back to hapū and marae before putting them on sale to the public.

“These snippets and snapshots of our ancestors are so vital for our identity, for who we are.”

“I was sitting on Webb’s auction website, just looking at cool stuff like art and jewellery and watches; but then I spotted a whole bunch of photos.” says Potaua Biasiny-Tule (Ngāti Whakaue).

“And among the collection there was one photo of our Nanny Rakitu, so I chucked a bid on – and blow me down, I won!”

The photograph, taken just after the 1886 eruption of Mount Tarawera, is of Rakitu, a Ngāti Whakaue matriarch and ancestor of Biasiny-Tule.

“I’ve got the photo, so I feel relieved, but other whānau don’t have thousands of dollars.

“Sometimes those are our last connections.” 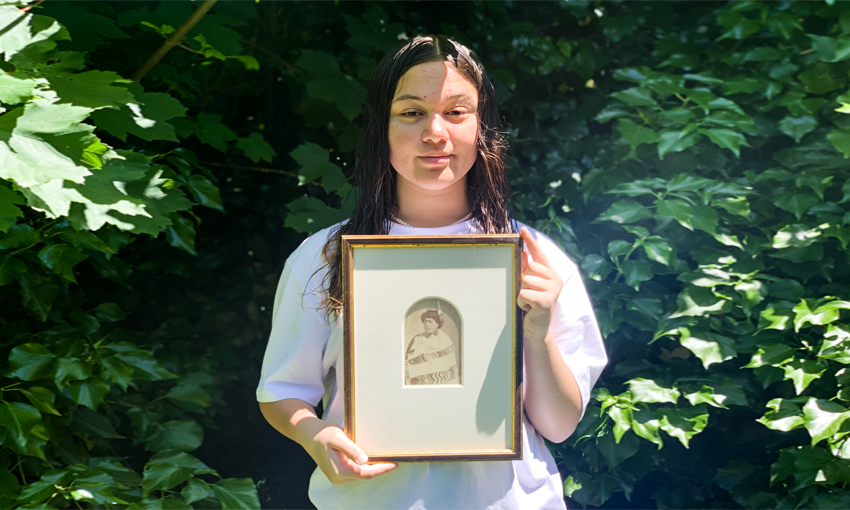 It’s far from just Webb’s selling these photographs. A quick search on your preferred search engine will lead you to multiple other auction houses in New Zealand. Almost every estate sale at Cordy’s includes a couple of historic pictures of Māori. In December last year, a collection of 50 Māori photographs were up for sale at Art+Object (note: the accompanying auction brochure didn’t even bother to use macrons on the word Māori). The International Art Centre in Parnell will often have a few photographs of tūpuna scattered among a collection of contemporary paintings on auction. Even on Trade Me you’ll find multiple copies of photographs, at bargain prices, to bid on if you’re in the market but not keen on parting with tens of thousands of dollars.

Perhaps even more concerning are the photographs that show up on the international market. In 2016, a collection of 19th century photographs of Māori were sold at an auction house in Whitchurch in the UK. Of the 12 photographs, four were bought and returned to New Zealand while the rest remain overseas and far from home.

The Protected Objects Act (POA) 1975 governs the sale of these historic photographs of tangata whenua and other objects by aiming to prevent people importing, exporting and transferring things considered cultural property.

Under the POA, different items fall under different categories and therefore sellers and buyers have different responsibilities depending on which category an item falls under. One of these classifications is taonga tūturu, which provides a more streamlined process for establishing the ownership and gives higher protection than other classifications in the act.

Taonga tūturu is defined in the POA as an object that:

Before selling taonga tūturu, it must be registered with the Ministry of Culture and Heritage. They can only be purchased by licensed dealers, authorised museums or registered collectors within New Zealand.

Unfortunately, says deputy chief executive at the Ministry of Culture and Heritage Tamsin Evans, “in the case of these specific portraits, all the photographers appear to have been Pākehā – so these photos, although depicting Māori subjects and clearly of significance to Māori – aren’t classed as taonga tūturu under the Protected Objects Act 1975″.

Instead, because these photographs are not “made, modified, or used” by Māori they’re deemed “documentary heritage objects”. And because of this categorisation, these kinds of photographs do not need to be registered.

“If they had one of my ancestors there I’d be very unhappy,” says Dr Ngarino Ellis (Ngāpuhi, Ngāti Porou), associate professor of art history at the University of Auckland.

Ellis believes that photographs of Māori need more protection and the current legislation needs to be expanded to align with Māori beliefs around photographs, “especially when you’ve got prices like this and it’s someone’s grandmother or grandfather”.

The prices that many of these photographs sold for are a shock to Ellis and she worries about how inaccessible the photos are to Māori as a result. 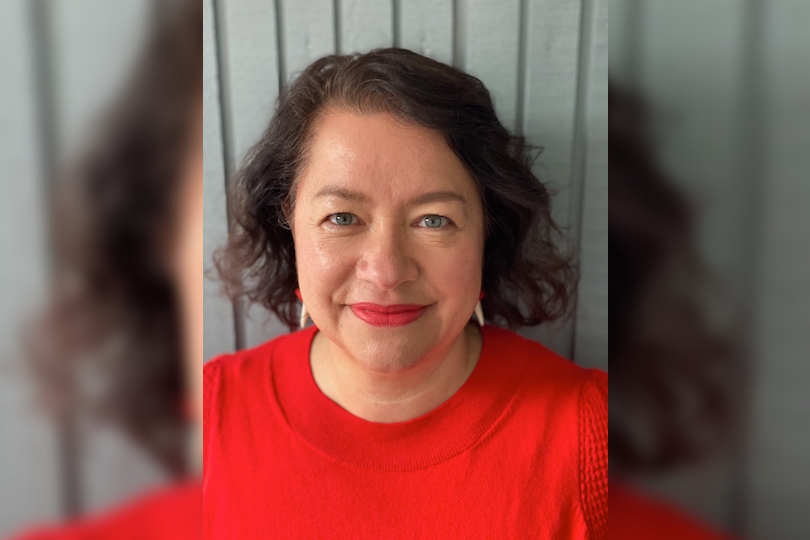 Ellis is hopeful that the Wai 262 inquiry, which will see legislation across the board reviewed to ensure that it’s in line with the Treaty/Te Tiriti, may lead to shifts within the Protected Objects Act to align with Māori perspectives of photography.

At its advent, there was some distrust in photography from Māori due to fears that a person’s spirit could be damaged by the process. However, by the 1890s many Māori had warmed to the idea and began commissioning their own photographs, which became imbued with important spiritual meaning and treasured – especially after the subject’s death.

As a result, customs developed across the country where portraits became part of tangi practices. Photographs of the deceased, and of other relatives who have died, are displayed around the coffin and are addressed as if they are the person. They also play a vital role in kawe mate practices. A custom also evolved where portraits of people who are deceased are placed on the walls of the meeting house – becoming a vital link to whakapapa.

“So it’s a really different way of thinking about photographs,” says Ellis.

“These images here, they might have been taken 100 years ago, but to our people they’re still living.”

Photographer Ngahuia Harrison (Ngātiwai, Ngāpuhi) questions “why you would want these photos if they’re not your tūpuna”. Harrison’s ancestor was a whāngai of Waka Nene, whose photograph sold for the highest price in the Webb’s auction. She believes that photographs taken by Pākehā of Māori should still be considered taonga.

The Pākehā approach is often that the artist is more important than the subject and that a photograph is merely a representation of a person, but Harrison says, “that’s a very western art world approach to art making, which even today could be largely discredited”. She says Pākehā buy these photographs as exotic items. To Māori, images of a person are the person. It’s as simple as that.

As part of the online advertising of the auction by Webb’s, collector and historian John Perry described the collection as “a window on a world that is long gone but there is still evidence of it here today”. This framing of the auction is concerning to Harrison.

“It’s still perpetuating those myths of the dying race, and yet we’re still here.” Before photography, Māori used other kinds of symbols for ancestors. Objects like hei tiki would be buried with tūpāpaku, retrieved and then later mourned as if they were the person.

“I think in many cases the photograph became what the carving always stood for – it was the ancestor. Not a representation, it is the ancestor.”

Harrison believes the rules that allow these photos to be freely on the market use “outdated ideas in order to legitimise bad behaviour” while ignoring the traditions and beliefs that Māori have around photographs.

“These ideas and behaviours are symptomatic of colonial ways of doing things; the impulse to control and the practice of individualism.”

To the people who benefit from these auctions – vendors, the auction houses themselves, wealthy collectors – the prices fetched for these kinds of photographs are no doubt seen as a cause for celebration. As Potaua Biasiny-Tule says, “for them it’s just a few thousand dollars worth of income, but for us it’s another 200 years of connection.”