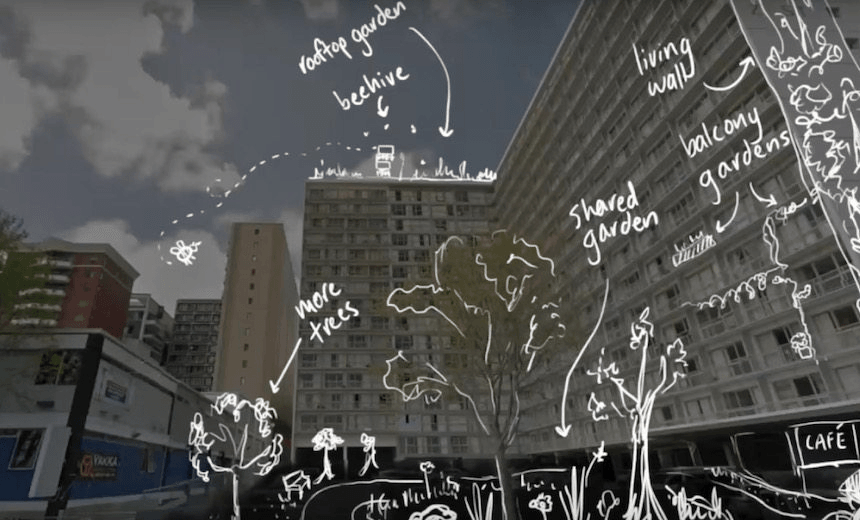 Green MP and planning geek Julie Anne Genter reacts to the Unitary Plan – and announces a four-step programme to radically evolve our urban environment into the future.

I love city planning – I’m a planning geek. So it’s pretty cool seeing people get excited about the Auckland Unitary Plan. The actual document might be unbelievably boring, but the opportunity it presents for Auckland to become a much more affordable, fun, and green place to live is very exciting.

The future of Auckland can be people living in warm, dry, quiet homes. Electrified public transport that takes you where you want to be, on time. Green spaces, both private and public. Bustling neighbourhood shops and schools. And after paying your rent or mortgage, there’s enough left over to go out and enjoy what your city has to offer.

The Spinoff’s War for Auckland just shows how much people want a change in Auckland, it shows that we don’t need to be scared of new developments. We can do them well and they aren’t going to make Auckland the new slum centre of the Pacific.

But the Unitary Plan can’t do everything. Central government policy needs to come in behind the planning rules to create a city that Aucklanders love living, working and playing in.

What are we talking about?

Firstly, we will make sure all new homes are warm, safe, quiet and dry by overhauling New Zealand’s Building Code so that it actually reflects the new type of homes that New Zealanders want to live in. Improving the standards for homes and other buildings, including energy efficiency, warmth and ventilation, quiet environments, water efficiency, and accessibility will ensure that new developments in Auckland are high quality homes that people love living in. Any homeowner or council staff member who has had to deal with the aftermath of leaky buildings knows that a loose Building Code doesn’t save us money in the long run. In fact in that case it had huge costs and left mouldy and damp homes in its wake.

Secondly, we will make sure that new developments look good and work well at the street level by putting in place a National Policy Statement on Urban Design. It will address street design, storm water management, access to buildings and how they interact with the street.

The Green Party is ambitious for great homes and neighbourhoods for all New Zealanders. We have a vision to move us towards the sorts of towns and cities that people are excited to live in. Importantly, we also have a plan. We know that with the right rules in place our towns and cities can be amazing.

You don’t have to take my word for it. With the magic of the internet you can have an explore yourself. Here’s Brisbane for example …

We just can’t wait for the old National government

Nick Smith is currently working on updating the Building Code, but what he is proposing is cold and visionless. Not only will it not give New Zealanders warm, safe, dry and quiet homes, it won’t help to create great cities that New Zealanders love living in.

On top of that, urban design – or how we could create great cities – is something that this National government doesn’t even think about. The previous Labour government already started work on a National Policy Statement on Urban Design, but National shelved it quickly when they got into power. It was pretty well supported when Labour put the idea forward and it’s time to get it back up and running.

Hearings Panel not having it

The Independent Hearings Panel said pretty clearly, when they rejected using tools like the Greenstar or Homestar rating, that they don’t think the Unitary Plan is the place to deal with sustainability or quality standards. They argue that it is central government’s job to set standards when it comes to things that will make homes warm, dry, quiet and safe.

That’s fine with us. That’s where central government needs to step in. We need to put in place the nationwide tools that will make sure that new developments in Auckland, and around the country, work both inside and outside. We’ll make sure they provide warm, quiet, dry, safe and enjoyable homes that fit happily into bustling, pleasant neighbourhoods. The combination of these tools with the Unitary Plan will make local neighbourhoods work better for everyone.

Coming out as a planning geek

The reason I’m a planning geek is because I’m passionate about the opportunities for healthier, happier cities to reduce climate, water and air pollution, inequality and the cost of living.

The whole reason Auckland has been so car dependent and low rise is that we imported harmful planning rules and traffic engineering from the United States in the ’50s and ’60s. But the result is actually far costlier than designing our cities around people, and it’s worse for the environment.

The myth has been that Kiwis are wedded to their cars and quarter acre sections. The truth is that they haven’t had any other option for half a century.

It’s not too late to change things!

Just changing a few rules can turn neighbourhoods from tarmac deserts into thriving communities. It will free up valuable urban land for mixed-use development, reduce the cost of getting around, and make for a happier, healthier city. Like this:

Step one: spend more than 1% of the budget on walking and cycling. People-oriented street design isn’t expensive at all compared to the infrastructure we need to move everyone around in their own cars.
Step two: more permissive, mixed-use zoning that doesn’t require an oversupply of off-street car parks.
Step three: Public-lead redevelopment that includes energy efficient buildings and affordable housing.
Step four: invest in high quality public transport as new development comes in.

Transformations of neighbourhoods. That’s what we’re on about.

More and more New Zealanders want to live in smaller houses and apartments, especially in the younger and older age groups. People want to live within walking or cycling distance of the places that they travel to most often. Most people are happy with mixed-use development, putting homes close to offices, shops, parks, schools and public transport routes.

When people are nervous about medium density developments it is often because they haven’t seen it done well before. The challenge for Auckland is to show how it can be done well. We want to help Auckland rise to that challenge. Of course, lots of people still want to live in large homes, further away from the big city. The great news is that we can provide a variety of different homes that will suit the whole range of people in our communities, and we can do it well. Better cities and higher quality homes will suit all New Zealanders and make sure that no one misses out.