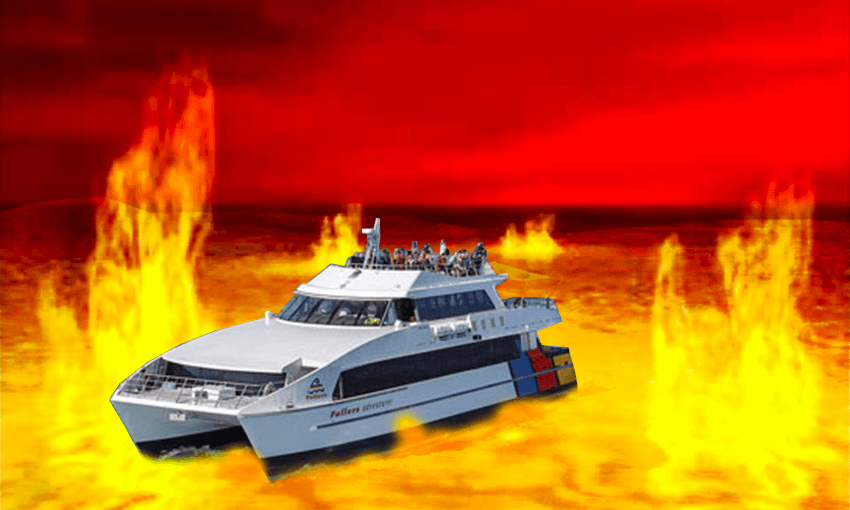 I survived the Waiheke ferry

The mood was set early on by cement walls and wire caging. Blocky orange fencing like industrial Duplo joined the demoralising walk to Auckland’s downtown wharf. I was on my way to Pier 2, the most dreaded port in the country. I would be experiencing what’s being called Auckland’s most hostile ferry environment in recent history: the rush hour Auckland-Waiheke ferry.

Boiling tensions over the Waiheke ferry route reached a head this week when MP Nikki Kaye took the fight to big business, guaranteeing a short-term improvement in staff resources. We can only assume the stated resources are riot shields. “We can no longer afford to have a relaxed approach,” said Kaye. On Monday night, frenzied passengers, desperate not to be left on the dock by the boat’s 6.15pm skeleton crew, also did not have a relaxed approach.

They were packed like sardines along the pier, a 15-person line of quivering distress in a space that could only hold four times that many. Fullers360, the only company operating the route, currently has a special “exempt” status from Auckland Transport. This means that while it accepts AT HOP cards, the council has no jurisdiction over its actions. It can be as crowded and as late as it likes.

Fullers has gone too far, playing God with the fates of nearly 0.5% of Auckland’s population, who run the risk of being late to protest busses. The company has become a raging capitalistic beast, too much for even the most guillotinable winemaker.

Minister of Transport Phil Twyford apparently has the ability to reverse Fullers’ exempt status with the stroke of a pen; with a snap of his sacred fingers. He has not done so. I question his loyalty to the people of Waiheke.

Boarding began and the crowd, beat into submission by a violent rain, crept into the transport. I joined them, ending up pressed between a small girl and an empty seat. Across the boat, a mother and her flock of four huddled in goosedown around a thermos of Greenleaf chai.

A grizzled man, his chest in camo and his arm in plaster, was slumped against the wall. He was a survivor of the dock riots from this week’s papers, and remembered raising his voice to a staff member vividly. He was on the phone to someone called “Babe”. The line crackled in and out over the wind. “It cut out,” he said to no one in particular. We hadn’t even left the port and he was giving up on love.

The clock ticked on, and a bevy of conspirators leapt up to start a mutiny. Their noble leader headed toward the onboard cafe, beginning a warcry as she marched. “Explain this delay,” she called. “Explain it!” The barista, who was not responsible for departure times, could not explain the delay. The uprising ended.

A man behind me was distressed by the delays sometimes because people “had to get to hospital”. I didn’t doubt it. I could see at least three people on the verge of aneurysms.

The staff I spoke to were reluctant to give their names, as part of the harassment they’d experienced that night included having photos taken of them. Fullers CEO Mike Horne has admitted, “there’s certainly a level of angst that’s building with our staff.”

Even if the onboard staff had the power to change Fullers’ services, they wouldn’t know where to begin. Half the passengers want them to wait longer, and the other half is pissed there’s a delay.

I shook my fist at the black sky. “Twyford, undo this!”

The sun sets by 5.30 these days, so when you’re trapped in the middle of the ocean with riotous baby boomers you can’t see a way out: for kilometres, all that’s visible is a rippling black and the shining lights of the civilisation you left behind. I was beginning to worry. Would there be a return journey? Would I have to become a vintner and live out my days with a DIY sewage system?

Half an hour in, I swear I heard a sheep. On closer inspection, it was a four-year-old human. I was sea-addled. My Ban 1080 chat wasn’t going over as well as I thought it would. I put sugar in my coffee, like a child. I understood the fury of the dock rioters; they’re stuck in the twilight zone for 80 minutes every day.

A wave suddenly dipped down, and the lights of the Waiheke ferry terminal cut through the dark. The boat came alive with hope. Old men dangling kombucha bottles from their hands woke up, students grabbed laptops, and yoga teachers rolled up their mats. Everyone was single-file again, desperate to get home and crack open a new aromatherapy candle.

Disembarked, I waited alone in the dark for my ride home. The spirits of ferries past whispered dark secrets into my ears: we can live again, they said. Phil Twyford can bring us back.

I was accompanied by only three other passengers on the way back to the mainland, all of whom I suspect were ghosts. The staff said this was pretty standard. “It’s bad on weekends, not during the week,” they said. They put down the bout of photographic harassment they’d had earlier to news hype.

The bright lights of the big city shone tall over the waves. At night, when approached by sea, The Cloud looks like the back end of a cockroach.