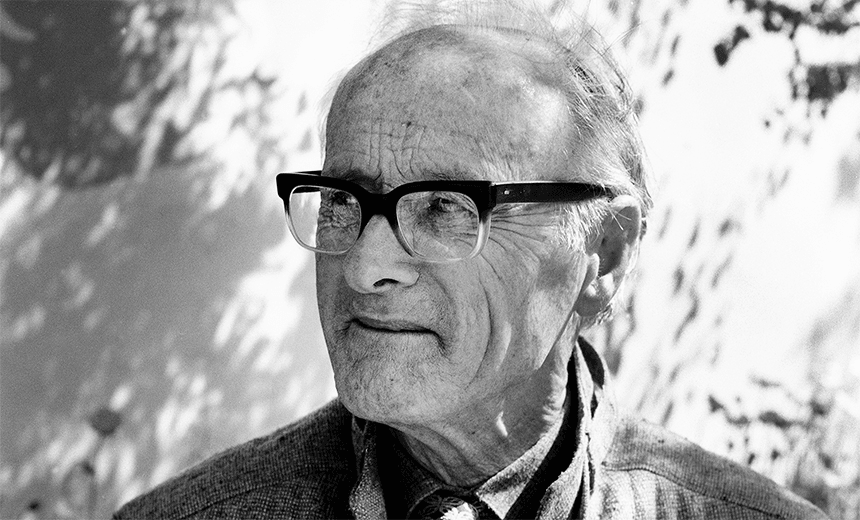 A stranger in a strange land: Part 1 in our week-long series on Greymouth writer Peter Hooper

All week this week we look at the life and writing of Peter Hooper (1919-91), a Greymouth author who won the national book award in 1986 for a profound, exciting novel set on the West Coast after an apocalypse. He’s now a largely forgotten name in New Zealand letters, but a new biography provides a vivid reminder of Hooper’s talents and achievement.

Today we feature an excerpt from Pat White’s biography. Hooper taught him in the third form; the two became friends, and provided each other with rare literary company on the remote Coast. What was it like to live there, alone, a bachelor till the end, away from the wine and cheese and chit-chat of literary life in the cities, stuck out in the sticks?

A theme in Peter’s interviews and private papers is feeling an outsider among West Coasters. But many on the Coast took him to their hearts, and not just his students. I think the aloneness was more a case of Peter isolating himself by being what he was, a natural outsider; it really had little to do with the character or aesthetic sensibilities of the West Coasters as he perceived them. He felt apart from all of us, and even perhaps a little superior in some ways, but his actions showed him sociably taking part in our lives and often enough enjoying that participation wholeheartedly.

When Jane Westaway interviewed him when he’d become a successful novelist, his feelings of a self apart were still there: “I don’t feel like a native Coaster. There are people who liked me as a teacher, then suddenly I was criticising them for cutting trees down. I’ve been on protest marches in Greymouth: 1960 – No Maoris, no tour; the Vietnam War – I was totally opposed to that. And the ’81 tour…Yes I do feel like an outsider. I feel like I’ve never found my own people.”

And, later, in the same interview: “There is no one here I can go to with my work.”

Yet he often showed his work to other people throughout his writing life, even though writers seldom have more than a very few with whom they trust partially formed ideas or manuscripts. Peter also shared his poetry with a number of West Coasters including, at one stage in the 1960s, Toss Woollaston.  These examples are not isolated ones, and they do not indicate the extent to which Brian Turner read Peter’s work outside his editorial role at John McIndoe Publishers in Dunedin. Nor do they provide full evidence of the relationships Peter formed with members of the national writing community.

During his tenure at Wellington Teachers’ Training College in the mid-1960s, Barry Mitcalfe began a cheaply printed quarterly titled simply Poetry, which he envisaged as a means of bringing the work of children and teachers to a wider audience in the school system. His second issue introduced Peter Hooper, “widely known as a teacher and a writer [who] introduces poetry from thirty-eight students, ranging in age from twelve to seventeen … Mr Hooper’s introductory essay, ‘Poetry in the Classroom’, should be read by all teachers interested in children’s writing. The poetry he presents fully vindicates the methods he expounds.”

Mitcalfe’s use of the words “widely known” is significant because in other contexts Peter continued to record regret for his isolation and his perceived lack of recognition of his work. The romance of isolation was an obvious preoccupation for Peter from time to time. Writing is indeed a solitary craft, and a writer can feel just as much an outsider in a city as anywhere in ‘the sticks’ or isolated rural areas. But Peter had obviously made significant contact with Barry Mitcalfe and, by association, other Wellington writers. Even if we allow for hyperbole in Mitcalfe’s introduction to Poetry issue Number 2, we can see that Peter was securing a foothold, becoming a known voice in poetry circles as far away as Wellington, as well as on the West Coast.

Many ex-students could offer memory of similar experiences of encouragement and support. An introduction to Thoreau’s Walden is a recurring theme that spanned the decades of Peter’s teaching career. He willingly shared his enthusiasm for literature and the natural world. Ron Pankhurst is just one such former student who has acknowledged his debt to that influential time: “It was Peter who first inspired me to read ‘Walden & Civil Disobedience’. We later talked in detail about the book & its meaning to us in the new world. I still have my autobiography which we had to write in the 6th form along with Peter’s very sincere comments. I also blame my obsession with books to Peter – I now have fairly near 8000 in total.”

Peter committed himself fully to those activities he saw as important, developing a way of life that tended to be separated from mainstream social intercourse in New Zealand. If one did not go to the pub, watch rugby matches or use the TAB, but instead enjoyed evenings where people read their poetry to one another or held discussions probing the merits of native over immigrant flora or explored the philosophy of transcendentalists, then social interactions might be limited. Of course, what time-wasting consists of happens to be a matter of personal opinion, and Peter made his choices. Naturally enough they tended to set him outside the mainstream, but not alone.

When schoolboys sought Peter out because they were at a loose end, he welcomed them in all their gauche naivety and lack of worldliness. Because he lived alone and enjoyed their company, it appeared easy for him to share time with them – exploring the goldmine tailings and shafts, looking for coloured bottles, dragging native seedlings back to plant on his property. And of course he could listen while they talked among themselves because – regardless of all else their company gave him – the material they offered for his fiction was invaluable.

His jottings at times contained details that Peter could not write about publicly. Weekend visits from boys, such as my brothers, meant he found out more than most in the vicinity knew about the family lives of these young men. Among his papers are drafts of many writing ideas that express his struggle in coming to terms with living where he did and the people he encountered there.

In his short story “Boys and Girls Come out to Play”, he used his knowledge of student gossip to fictionalise the story of an end of year party, set within the complex world of teenage “growing pains”. In a 1985 Greymouth Evening Star interview with Steve Braunias, Peter, commenting on characters in his writing, and in this instance probably those in “Boys and Girls”, said, “I can pinpoint those characters now; they were from Grey High.”

Notes From the Margins: The West Coast’s Peter Hooper by Pat White (Frontiers Press, $40) is available at Unity Books.