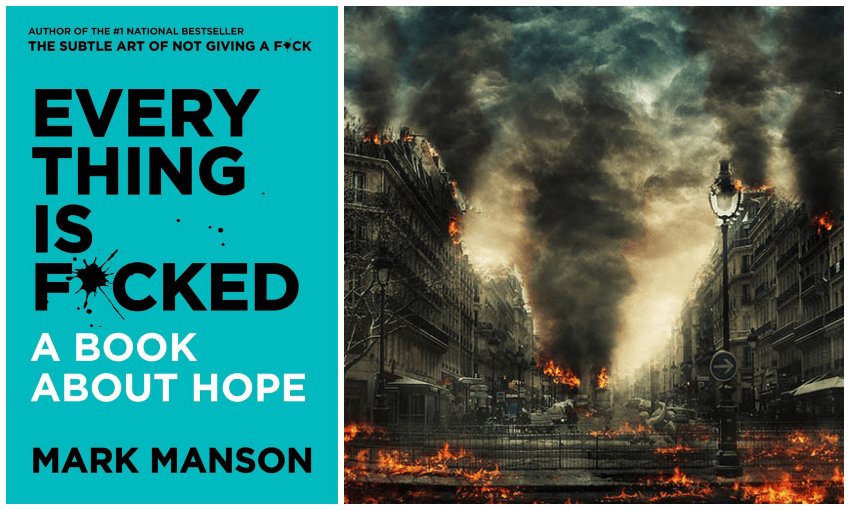 Mark Manson’s Everything is F*cked: a first-person review

Mark Manson has followed up his mega-selling The Subtle Art of Not Giving a F*ck with another sweary self-helper. Mark Broatch tries to get into his head.

Hi there. You might remember me from my previous book, The Subtle Art of Not Giving a F*ck. In that book, which I wrote when I was 32, I told you that everything you knew about self-improvement was wrong. You know, all that be healthier, be happier, be the best stuff. All wrong.

Don’t try, that was the answer, as the epitaph on Charles Bukowski’s tombstone said.

Don’t try didn’t mean don’t try, of course. Bukowski tried like hell for decades to be a writer, and jumped like a shickered sheep when he got the chance. It’s more that Bukowski knew he was a loser, accepted it, and then wrote honestly about it. Even after he got famous, he still showed up to poetry readings pissed, exposed himself and hit on every woman in sight. He eventually sold about two million copies. As I say, self-improvement and success often occur together, but that doesn’t necessarily mean they’re the same thing.

All that conventional life advice is actually fixating on what you lack. We are constantly bombarded with messages to give a fuck about everything, all the time – buy more, own more, make more, fuck more, be more. Buying more stuff may be good for business, but it’s bad for your mental health. We all have flat-screen TVs and our groceries delivered, but we are more depressed, more anxious and unhealthier than ever. The key to a good life is actually giving a fuck about less. Learning how to focus and prioritise what’s important and what’s not is perhaps the most worthy struggle one can undertake in one’s life. That’s the subtle bit.

That book sold six million copies, by the way.

Anyway, I’m baaaack! I’m now 35, and boy, I mean fuck, have I got some news for you. Everything is F*cked has the same artfully told tales about genuine heroes, repeat-for-emphasis arguments, fewer personal anecdotes (though, yes, before I got married I was popular with the ladies), a slightly more serious tone. Like The Subtle Art, there are deftly placed swears every few pages. And now with numbered endnotes, for those of you who wondered if I was just pulling those perfect philosophical epigrams out of my ass.

The subtitle of this book is “A Book About Hope”. By hope, as I write in a longer endnote, I don’t mean optimism or belief in the possibility of positive results like most academics, but purpose or meaning, drawing as I do on motivation and value theory research.

First, though, we have to figure out life’s purpose. To do that, we have to sort out what our Thinking Brain and our Feeling Brain are up to. See that self-control is an illusion. Get to grips with The Uncomfortable Truth and the Classic Assumption. Etc.

We’re the safest and most prosperous humans in the history of the world. Yet we suffer the paradox of progress: you remember, the better things get, the more we seem to despair. The wealthier and safer the place we live, the more likely we are to commit suicide. True.

If there are similarities with Jordan Peterson from time to time, I can’t help that. When you tell people that much of life is pain and striving, to stand up for your own principles and that Nietzsche was a pretty smart cat, perhaps that comparison is bound to be made. But look over here, I also have Kant, Schopenhauer and Plato. And Tom Waits.

The middle section of the book is about how to start your own religion. You know, belief systems, followers, rituals, scapegoats. Don’t worry, it all makes sense at the end. Though the actual end does take a bit of a turn you probably didn’t see coming. Though if you were reading carefully, you might have twigged that it’s all part of a larger argument, about algorithms and stuff.

Even though my books are shot through with interesting ideas about the wrongs in society, and genuine synthesised insights from my having read screeds of psychological research, I don’t offer any political or policy solutions. Politics is a transactional and selfish game, as I say, and democracy is the best system of government thus far for the sole reason that it’s the only one that openly admits it. It acknowledges that power attracts corrupt and childish people, and forces leaders to be transactional. The only way to manage this reality is to enshrine grown-up virtues into the design of the system. Things like freedom of speech, freedom of the press, guarantees of privacy and the right to a fair trial have to be baked into our social institutions. How do we do that?

Let me talk about political extremists. They are intractable and impossible to bargain with, and so, by definition, childish. A right-wing extremist will claim she desires “freedom” above all else, but really means that she wants freedom from having to deal with any values that do not map on to her own. Freedom from having to deal with change or the marginalisation of other people. A left-wing extremist will say he wants “equality” for all, but what he really means is he never wants anyone to feel pain, or harmed, or inferior. And he’s willing to cause pain and adversity to others to achieve that. Equality requires that everybody feel the same pain; freedom demands each person be forced to reckon with lifestyles and ideas that conflict with their own.

In the developed world, we’re not suffering a crisis of wealth or material, but a crisis of character, of virtue, of means and ends. We’re childish and impulsive, or sometimes compromising adolescents, with too few real adults who do the right thing because it’s right; the maturity of our culture is deteriorating. Social media has made it so much worse.

So. Don’t pursue happiness. Living well doesn’t mean avoiding suffering: it means suffering for the right reasons. Get better at feeling bad. Don’t hope. Don’t despair either. Just be better. Be more compassionate, more resilient, more humble, more disciplined. Maybe meditate. Though actual Buddhist meditation is hard. You’re supposed to suck at it. Embrace the suckage. Have faith in something. Be an adult. Read the endnotes.

Everything is F*cked: A book about hope, by Mark Manson (Harper, $35) is available at Unity Books.

Book of the Week: The subtle and tremendously self-serving art of not giving a fuck