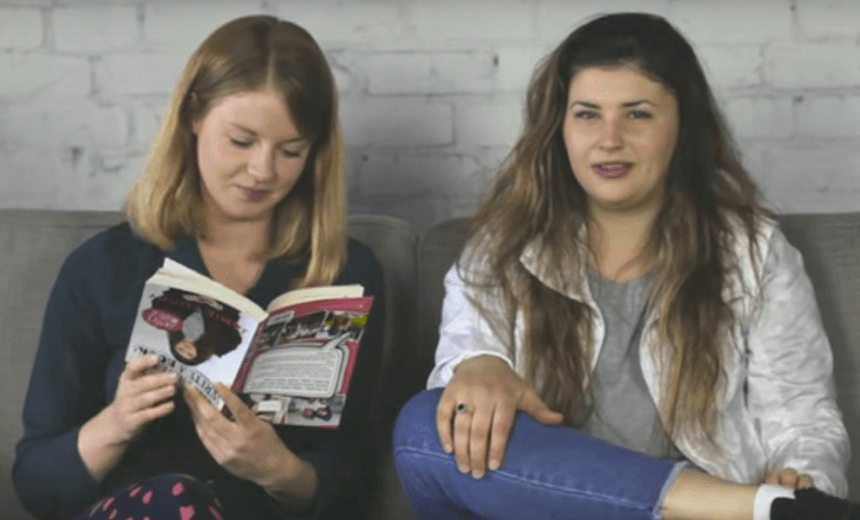 The first time I encountered Jamie Curry she was in a short Facebook clip, you know the kind that start out kind of normal and then you suddenly see a dog walking past in the background on its hind legs while smoking a pipe? Jamie was that pipe-smoking dog that day, beginning by innocently cleaning her bathroom to ‘Talk Dirty To Me’ and eventually spiralling into a wacky inflatable arm-flailing tube man covered in shaving cream. It was absurd, completely fearless and a million miles from the Jessica Simpson-style foamy young woman of yonder year.

I’m 24 years old, which is just old enough to have missed the boom of the YouTube personality. When I was at high school and university, I would gladly take a militant rooster or an inspirational sloth over someone blabbing to a camera any day of the week. When I was first asked to get onboard to help out with Jamie’s book, I had to come to the realisation that there was a whole YOUNG PERSON world happening that I had absolutely no grasp on.

Juggling the crushing realisation of my own mortality, and the fact that I’m definitely not a teenager anymore, I shakily flicked through a bunch of Dolly and Girlfriend magazines. Every single poster in each magazine was of a YouTuber – or ‘social influencer’ as their agents like to call them. No Chad Michael Murray, no Gwen Stefani, no Ricky Martin. All just posters of people who started out talking to their camera alone in their bedroom. It was daunting and confusing, which is why I still think a lot of people who aren’t approximately 15-years-old struggle with and berate the power of the YouTube community.

To dive into the titular Jamie’s World, I did what anyone would do and binge-watched her entire YouTube channel until her voice, wig-wearing characters and erratic dance moves were lodged deep in my every thought. Everything from Justin Bieber parodies to impersonations of her Mum to more traditional ‘tag challenge’ fare. Her videos were often rough as guts, unhinged and full of stupid faces and alarming noises I didn’t know humans were capable making. Over time, I started to see why she was so successful, and why she had such a huge following of avid fans (1,387,625 on YouTube and a whopping 10,102,788 on Facebook – more than Lorde).

I thought back to when I was a teenager, and who my own idols were. For someone who often felt awkward and out of place, I gravitated towards the goateed boss David Brent of The Office, and Pete Wentz from Fall Out Boy as the only people who understood me (naturally). I didn’t have any female role models in popular culture that were free to be exactly as freaky as they wanted to be. It’s only looking back that I realised what a breath of fresh air Jamie must be to teenage girls, or anyone who feels out of place. Jamie goes above and beyond to make sure she is the weirdest person alive at any given time, which would surely take some of the stress off.

We did a lot of Skyping back and forth in the beginning, because Jamie was travelling around Australia on the Amplify YouTube tour. Thousands and thousands would turn out for meet and greets, selfies and autographs. A lot of people cried when they met her, this 19-year-old girl from Napier. I thought this was odd too, until I remembered how I cried at Fall Out Boy and then threw up on my own shoes. Her direct, authentic one-on-one relationship with her subscribers is by far more intimate than anything From Under the Cork Tree could have ever provided me.

She had one two-hour slot free in Sydney one day when I happened to be there, but we missed each other. Jamie’s schedule is unlike anyone I’ve ever known, she seems to work in one hour blocks, about four weeks in advance. It can make collaboration tricky, if it wasn’t for the information superhighway. She once Skyped me from her parked car after a shoot in Wellington. It seemed apt that we would spend so much time communicating through the medium that she was most known for.

Finally, we were able to tee up a day that I could fly down to Napier and spend time with her in her hometown. She picked me up from the airport in her incredibly flash car that she had bought for herself. That’s the other baller thing about Jamie, she has amassed an enormous empire around her just based upon her being exactly who she is. If that’s not the ultimate end goal in life, I honestly don’t know what is.

We sat in her lounge and talked for hours and hours about her upbringing, her family, her school life and her favourite things. Still living in her family home at the time, we perched in the fancy lounge – all untouched giant candles and silver photo frames. She told me about growing up as an outsider, digging herself a giant pit in the backyard to sit in (she took me out to see it) and how she was a sporty tomboy who got teased at school. A couple of hours later we would drive past her old school, and she dramatically gave the fingers to the ghosts of bullies past. It’s definitely a cool look when you’re driving past in your brand new Audi that you bought for yourself at the age of 19.

After talking for hours, wringing out every little corner of her journey to YouTube success, we went out to get lunch. Which is where I encountered Jamie’s infamous fussy eating habits for the very first time. I had always thought she was joking when she talked about only liking a very small number of breakfast foods, but I always thought it was like how when I was younger and pretended to not like tomato to seem interesting. She ordered a plate of bacon and eggs, which she would proceed to do every single other time we caught up. She’s pretty much Ron Swanson. I think I remember her saying she didn’t even really like eating rice.

With a few more hours to spare before my flight home, we delved into her life in the warm YouTube glow. She was uncomfortable talking about ‘fame’, and corrected me every time I used the word ‘fans’. But there’s no denying that Jamie is proper famous. She can’t go to the mall, the movies or outside any school grounds around 3pm. Pop concerts? Forget it. After her move to Auckland I bumped into her at the supermarket. She was buying crumpets and white bread for her gentle palate, and someone took a photo of us in the aisle. I felt like Blanket Jackson.

Discussing her YouTube success, Jamie opened up about having anxiety in large crowds, panic attacks, and nearly fainting on stage at YouTube events. She maintained that she’s always been much more comfortable talking to a camera than a group of people, a trait that I suspect isn’t unique in the breed of YouTube personality. I began to see how YouTube became an outlet for an awkward teenager, but ironically catapulted her further into the belly of the beast than she was ever prepared.

I flew back to Auckland and we continued Skyping, texting and ringing back and forth about the book as Jamie flew to Australia, southeast Asia, Los Angeles and Fiji. All the while, I was sat in the same place in Auckland. She would email through changes in the middle of the night, and chase up with random txts about one specific line, particularly worried chapters mentioning the people who bullied her at school. She didn’t need to call them out individually, and I told her that the fact that Jamie’s World exists is revenge enough in itself.

Months later, and They Let Me Write a Book now sits in bookstores next to Tina Fey’s Bossypants, Lena Dunham’s Not That Kind of Girl and Amy Poehler’s Yes Please – all books that I drank like a fish, parched for so long from a lack of snackable, relatable female realness. Helping to write something for young women that won’t make them hate their body, be depressed that they are single and that might even make them laugh, is one of my proudest achievements yet. I am glad they let us write a book.

They Let Me Write a Book is available to purchase for $24.99 from Unity Books