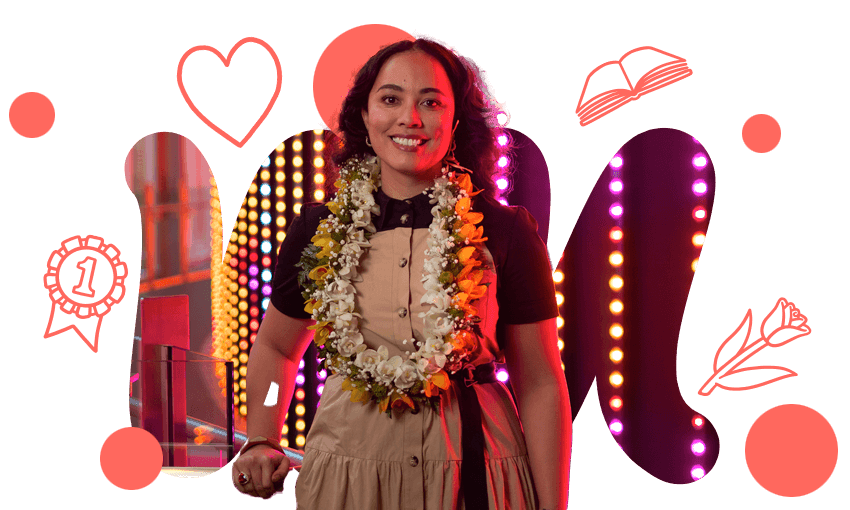 Courtney Sina Meredith on pain, fearlessness and taking up space

The Auckland writer tells Gabi Lardies how a painful condition has pushed her beyond fear – and why she’ll keep fighting for queer women of colour.

When she was asked to be the honoured writer at the Samesame but Different literary festival this year, Courtney Sina Meredith was shocked. Why? Because “I’m not very old”, she says.

I was surprised at her surprise. Sitting on the other end of the phone, her latest book, Burst Kisses on the Actual Wind, placed carefully next to me and another, Tail of the Taniwha, gently thumbed and dogeared on my shelf, I thought, “But you’re iconic!” Having read her bio in nervous preparation to chat, I knew she had published four books, been selected for prestigious residencies in the US and Germany, and was the University of Auckland’s 2021 Young Alumna of the Year.

She came around to the idea, however, when she realised her youngest daughter considers her “older than how tall a giraffe is”. That and, of course, that she has been “fighting for a very long time for queer women of colour so to be able to occupy spaces we often are not welcomed into or are not seen to be part of”. This was an opportunity to take that space, to walk that talk, to actualise this vision. Through a belief that queer representation is still lacking in the literary world, Samesame but Different, a part of the Auckland Pride Festival, celebrates LGBTQI+ writers. Each year an honoured writer is selected, usually someone with more years under their belt: the likes of Renée Taylor (88), Peter Wells (69), Victor Rodger (50) and Ngaio Marsh, who was honoured posthumously. Meredith is only 36.

Of Sāmoan, Mangaian and Irish descent, Meredith is deeply involved in Pacific arts communities. For her, it’s about a bigger picture rather than personal success. “Being the honoured writer means something to me but it’s more about the communities that I’m passionate about and that are visible through my work – that’s what I’m really excited about.”

Meredith speaks with warmth and confidence. In the first few minutes of our call it feels like we’re friends rather than famous poet and fan girl. She talks about the difficulties she continues to experience in the spaces she takes up, namely “racism literally every week”. Afterwards I can’t help but blurt out: “You’re so charismatic and natural in the way you confidently put your work out… you have made this space you take up and you bring others along with you. How have you learned to take, or make, that space?”

“First of all that’s like, very fucking sweet of you to say.”

Taking up space is one of the core points she will be discussing with Jeremy Hansen this afternoon (3.30pm Saturday, February 19), a headlining event in this year’s programme that was forced online due to recent Covid restrictions. For people who had experienced marginalisation, by virtue of not being straight, cis, white etc, taking up space can be uncomfortable. It can be dangerous, anxiety inducing, and feel unnatural. Some people, based on markers of their identity, are pressured to make themselves small and hide in order to navigate the world.

In her literary career, Meredith has felt these pressures, she has “filtered, funnelled and had to put [her voice] through hoops of fire for people to take it seriously”. She “didn’t know how to challenge the status quo or what to do when being told ‘no’ by very powerful people”. I didn’t expect to hear this from someone who wanted her debut poetry collection, Brown Girls in Bright Red Lipstick, to be “very sexy”, someone who is the director of Tautai Pacific Arts Trust and a leader in her communities.

She tells me two things that have helped her have the resilience to fight for and occupy challenging spaces: community and pain.

Meredith has suffered from endometriosis – a painful disorder affecting one in 10 New Zealand women, where tissue that normally lines the uterus grows outside the uterus – since she was nine years old. But this hereditary pain, carried also by her mother, grandmother, aunties and cousins, has pushed her beyond fear of other pain. It is so severe, she tells me, “there is nothing that anyone could say about my work or my practice or who I am as a person that could be bigger than that”. This pain has fostered resilience and fearlessness.

Above pain, Meredith attributes her strength to her community. In the beginning when she “was still in the dirt… a little seed that hadn’t pushed through yet”, before she had published a single thing, she decided on a small group of people whose opinions mattered to her. It was a tiny little network – her mum, aunties, people who loved her and understood her work. These were the people she reported to and updated about her practice. They fortified her spirit in the face of bad reviews, rejections and the difficulties of being “other”. Later, when a project was turned down by an institution because “they didn’t think that I was successful enough, that my writing was good enough”, it was the students she was teaching who told her “Go back! Don’t let that stand. You know that that’s not true.” They said “Why? If you have this degree, if you already have had this huge €50,000 residency, and a book, and you’re still not good enough, then who can be?”

A core value Meredith operates by is that “a true artist creates artistic opportunities for others”. She occupies difficult spaces so the sharp corners of the routes to get there can be softened by her path. But Meredith is dubious of some of these spaces. Reminding me of Audrey Lorde’s famous maxim, she tells me that holding doors open to flawed buildings would fall short of her longer-term vision. She hopes the voices that follow her won’t have to demonstrate service to the power dynamics of an alien and sharp world. Instead, “I’d love to see not just doors held open but entire systems reimagined.”

During our conversation, Meredith continually returns to the importance of her communities. She doesn’t “ever want to get so confused with where I’m trying to position myself or my voice that I forget about the importance of being woven within all of the voices that contribute, and that mine bounce off”. Asking her mother to edit and write the foreword of her latest book was an empowering moment – instead of asking permission or legitimacy from outside, she turned to her direct community. “I don’t know of any other books like that… you can get to this place of such love and confidence.” The external filters, funnels and hoops of fire were deemed irrelevant.