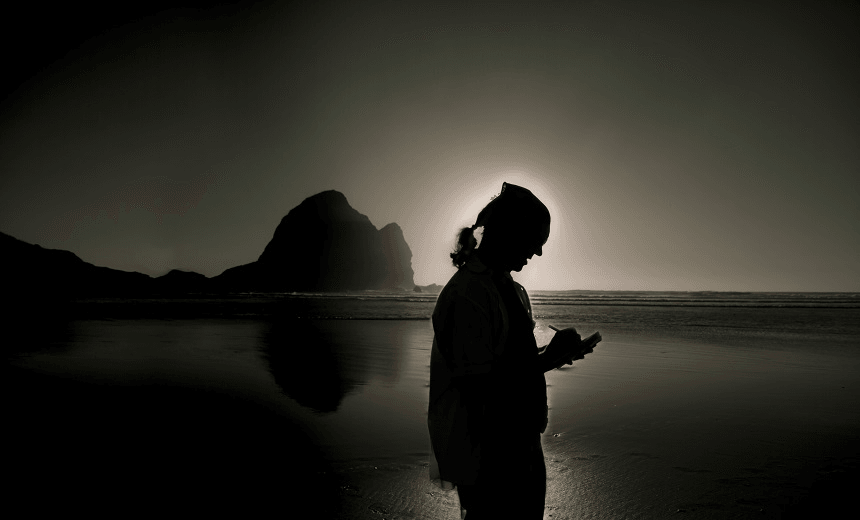 By Ruby Porter
Guest writer
Made possible by

Strait Men and Other Tales is Murray Edmond’s first book of prose – four linked short stories, dark and funny, artificial and all too real at the same time. It’s set in the recent past in which New Zealand is a ‘land of milk and gambling’, where everyone stops work for lunch when a whistle sounds at noon, and a river runs right past your backyard, until it’s diverted. Yet all these stories in some way re-imagine history, reconstruct that past. There are farmers, beekeepers, and hippies – but the farmers farm mink, the beekeeper is also a geneticist, and the hippie’s a single mother. New Zealand relics – like Truth, the tabloid – are here alongside the satirical fiction of Balls, a right-wing response to anarcho-left-wing Cock magazine.

And there are the Kiwis we know about, either characters in the stories, or characters in the stories within the stories. Politicians feature (Bill Rowling, Winston Peters, Harold Holt, Big Norm, Muldoon) as do writers themselves (Fleur Adcock, Janet Frame, Alan Duff). There’s even Bob Jones, John Clarke, and Barry Crump playing himself in a made-for-television biopic. But their world is invaded by the fictional, and the line that demarcates them is often hard to locate. In ‘Room Service: a Diary and a Commentary’, we meet both Maurice Blanchot and Jan Blonski. But, instead of the French theorist and Polish historian, we get two playwrights/directors, a Kiwi and an American respectively.

Despite the book’s New Zealand centre, the (multiple) literary allusions are wider-ranging. ‘Strait Men’ references both Othello and Cymbeline (a Year 10 English student could tell you this story will involve jealousy). Plays feature prominently, and in one Johann Wolfgang von Goethe sails into the Hokianga before his death in 1832, while in another, Franz Kafka is envisaged as a sharemilker in the Bay of Plenty, ‘a lost soul… plonking around in a pair of gumboots… A kind of punk Fred Dagg.’

In fact, Kafka is all over this collection, sometimes in the form of explicit homage. ‘Room Service’ mirrors the The Trial, beginning with three unidentified men appearing in the protagonist’s hotel room and detaining him – never explaining why, and communication seems to be largely by letters in unmarked envelopes. ‘The Last Resort: A Treatment’ mimics The Castle by naming its main character simply ‘L’, and following her struggle to get inside the resort itself, finishing mid-sentence.

There’s also Kafka-esque confusion in most of the short stories. From the first page of ‘The Roamers: Two Monologues’, there are names we’re meant to know, intonations we’re meant to pick up on. There’s dialogue inside the dialogue, and, at first, it’s hard to be sure of the identity of the person addressed. But, by the end, some of the connections are over-explained: the story would have been stronger if more trust was placed in the reader. At points, information already suggested was spelled out, in sometimes clunky dialogue-as-exposition.

Edmond’s prose still reaches the same heights of his best poetry (‘It feels, when you drive it, that you are edging your way along ledges of a cliff that have been stitched together with gravel to make an impossible path: below the sea, above the sky’.) But in his poetry, the gaps aren’t so neatly sutured.

The stories are still experimental, but in structure: three have split narratives, either interspersed, or one perspective following another. This allows relief from some of the quite intolerable narrators, who are by turns racist and sexist and totally privileged. The fourth follows what a mysterious cinematographer, ’the Master’, perceived as the ‘six-chapter structure in Goethe’s Faust, though this has never been evident to anyone else.’

From letters and emails to diaries, playwrights to academics, much of this book is writing about writing. And many of the phrases could be talking about Strait Men and Other Tales itself: a ‘mix of fiction, reportage and autobiography’, unearthing ‘the prefabricated, the half-baked and the she’ll-be-right treasures of a culture as pleased with itself as any’.

Strait Men and Other Tales ($30) is available at Unity Books.